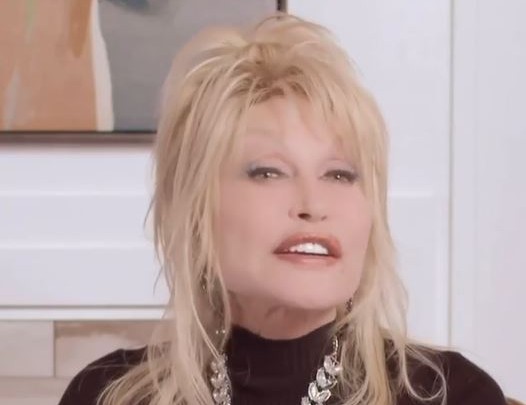 No one can ever say that Dolly Parton lets a single minute slip away. At 74, the country music queen has more energy and sparkle than Generation X, Y, and Z put together. The songwriting legend also has more projects in the works than her contemporaries in the industry “can shake a stick at,” to borrow a country folks’ term.

The heart of the season would be complete without Dolly Parton Christmas songs.  She put her whole heart into her first collection of new Christmas music in 30 years, “A Holly Dolly Christmas.” The album features Dolly singing duets with some of her own family and a few special friends.  Dolly wrote the song, “You Are My Christmas,” specifically to sing with her brother, Randy. She turned playful and a little sultry for her number with Michael Bublé, “Cuddle Up, Cozy Down Christmas.”

Still, even with all this early Christmas cheer, Dolly Parton knows that some of her fans and many followers are desperately in need of a smile from a simple truth, like only the singer can bring.  Southern Living shared via Yahoo that the petite dynamo of goodwill and good songs will be making special deliveries of her “Dollyisms” on social media. The best presents don’t come wrapped with a bow!

Fun bits of wisdom are a Dolly Parton specialty

“I try to do something, be something, or say something that helps somebody and glorifies God,” Dolly Parton speaks in countless interviews. Her thousands of songs and hundreds of unforgettable hits are beacons of light to listeners coping with paying the bills or getting past the pain of a breakup. When she introduced “Dollyisms 101,” she made it clear that her words were meant for sharing.

“Dollyisms 101. Over the next few months, I’ll be sharing some of my favorite (and even a few new) Dollyisms with you!” gushed the artist. Parton encouraged her following to share her sayings with anyone who needs “a little pick me up or a smile.”

Speaking of smiles, one precious Dollyism is “When you see someone without a smile, give ‘em yours!” The immediate response was overwhelming to the new course from Dolly Parton.  Comments of gratitude flowed in from appreciative fans.  Everything from Dolly’s spirited, famously infectious laugh to her vast catalog of songs got more than honorable mentions. One faithful fan valued the inspiration from Dolly Parton “to take the time to turn our lips upward” and stay grateful.

No one should ever forget Dolly Parton’s fun side.  The entertainer never minds making a joke at her expense.  When she was asked how long it took to get her hair done, Dolly shrugged and said: “I don’t know, I’m never there!” It’s no wonder why everyone would love to be Dolly Parton’s next-door neighbor.  A daily dose of “Dollyisms 101” is probably the next best thing.

She sang the stress away for Stephen Colbert

Stephen Colbert reigns over political humor in the late-night television domain. A constant diet of debate and opposing discourse can take its toll on the soul.  The host often shows his love for great music of every variety, along with the artists who create it. Nothing prepared Dolly Parton or the sometimes sharp-tongued humorist for the emotional response to a song Dolly sang straight from her childhood.

Stephen simply asked if Dolly remembered any of the songs her mother used to sing.  “I remember all of them!” Dolly Parton proclaimed. She launched into a flawless, impromptu, a cappella version of “Bury Me Beneath the Willow.” It took less than a minute before Colbert was dabbing away tears. At first, Dolly thought he might be pretending, but when the emotion continued, she understood it was real.

“Like a lot of Americans, I’m under a lot of stress right now,” Colbert confessed. Dolly Parton described how music has always been her therapy. She works out confounding situations of life with strums on her guitar, or even just her acrylic nails. Whether in rhyme or not, the feeling in her words is healing.

“It’s hard to be a diamond in a rhinestone world,” Dolly Parton shares in her latest from “Dollyisms 101.  The lady who always says she loves to shine when she sings looks just like a luscious chocolate drop in her most recent Instagram message.

With the virus still spiking in many areas, and the pandemic changing plans for many families this holiday season, it’s a valuable lesson to remember that a favorite song, a smile, and simple acts of kindness cost nothing, but can mean the world to someone else.

In her new book, Songteller: My Life in Lyrics, Dolly Parton delves into the meaning and her mindset when writing about 170 of her songs.  She was born with her gift to tell stories through her music, but Dolly Parton wrote many of those songs when she had little in her pocket. A dream can survive the darkest times, and this Christmas, the gift of time, songs, and celebrating together safely are blessings indeed.