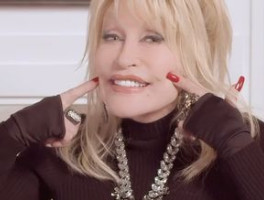 For all of the endless honors and accolades that Dolly Parton has earned over more than six decades as a country music legend, she has never claimed to do it alone.  At this moment, her Christmas album, A Holly Dolly Christmas, is still sitting atop the Christmas and Country charts. And she specifically chose some talented family and friends to bring extra sparkle and feeling to songs she wrote.

When it comes to her values, Dolly Parton never neglects to credits her parents and her siblings for the lessons that have stayed with her since childhood.  Her Imagination Library is a tribute to her father, who never learned to read. Yet, his famous daughter praises that he was “the smartest man I ever knew.”

Dolly attributes the business savvy that she takes into many boardrooms to her dad’s wisdom.  The spiritual side of Dolly Parton derives in large part from her mother and her maternal grandfather. It’s no wonder that the singer still strives to find “the God-light” in every person she encounters.

There’s another person indescribably close to Dolly Parton that the public rarely sees. Carl Dean and Dolly Parton have shared 56 years together and 54 years of marriage as a one.  Their solid union doesn’t demand that they always be in the same place, however.  The country music queen savors her time in the spotlight, while Carl likes his time alone, as Parton elaborated on In People.

Carl doesn’t take to the limelight, she says

“it’s just not who he is,” confirms Dolly Parton when she’s questioned about her husband never popping out on stage or showing up for a red carpet.  “He does not want to be in the spotlight at all,” his wife reiterates.

“He’s like a quiet, reserved person,” Parton relates.  She also agrees with his fear that “if he ever got out there in that [fame-frenzied world], he’d never get a minute’s peace.” Dolly Parton feeds her gypsy spirit with her cram-packed schedule of projects and performances at 74, and also does her part to make sure that Carl, 78, can stay home in serenity.

“I’ve always tried to keep him out of the spotlight as much as I can,” assures the famous wife. Her husband always affirmed that “I didn’t choose this world. I chose you, and you chose that world.” Dolly, on the other hand, assures that they have managed the difficult task of living their lives “separate and together.”  “We do and we have,” Dolly Parton maintains.

Just because the paparazzi can’t produce a gaggle of pictures of Carl Dean from the latest soiree with his wife doesn’t mean that he’s not a very real person, as Dolly Parton validates.  She doesn’t deny that some sensible separation can be beneficial in a marriage, as she shared with Gabby Barrett in a September virtual chat.  Sharing the same sense of humor and “respect and admiration for each other” certainly helps, too.

Dolly Parton knows Carl Dean will help out a good cause

During a 2016 interview with the UK’s ITV program, “This Morning,” Dolly Parton discussed how she and Carl Dean had recently renewed their wedding vows for their 50th anniversary.  Dolly delighted in describing how their individual zodiac signs—hers Capricorn, his Cancer—made the perfect match for their differing lifestyles.  “He’s a great guy,” Parton praised.

Perhaps one of the ways Dean proved his virtue was by allowing some of their wedding photos to be auctioned off to benefit the children’s charity.  It was the only way Carl would agree to the effort, and Dolly Parton concurred that she would never subject her husband to the attention “if it wasn’t for the kids.”  The couple may not be parents themselves, but they have blessed untold numbers of children through their generous hearts and ventures.

God gives messages to Dolly Parton through her husband, Carl

Carl Dean and Dolly Parton share more than a match made in heaven, so to speak.  The superstar songstress revealed to Stephen Colbert during a visit earlier this month that she thinks her husband “is sort of clairvoyant sometimes.”

When Dolly has things weighing on her mind and heart that only prayer can handle, she relayed to the late-night host that her husband will often give her a message not to worry about the situation, or simply give her a solution.  She has experienced this divine connection even when she has not shared a word about the problem with her husband.

Dolly Parton declared that the divine words were simply another expression of love between the two.  Closeness like this cannot be measured by the number of years together, but by the bonds of the “Heartstrings” to borrow another Dolly Parton title.  The power of love doesn’t depend on physical presence alone.