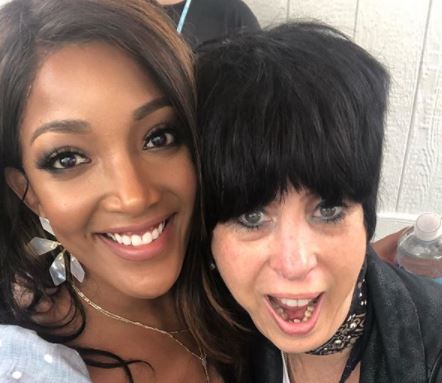 Luminous country music singer-songwriter Mickey Guyton is celebrating motherhood, making history, and mapping out her own path to success all at once.  In August, the songstress announced the joyful news that she and her husband, Grant Savoy, were expecting their first child.  In September, Mickey Guyton took her place in history, becoming the first black woman ever to perform at the 2020 ACM Awards. Her soaring notes and the soul-piercing themes of “What Are You Gonna Tell Her?” went straight to the heart of everyone listening, far beyond the hallowed halls of country music and its legends.

Last month, the lovely expectant mom broke the news that she is carrying a son. Mickey Guyton openly voiced many of the cultural, social, and emotional concerns that penetrate the conscience of every black mother bringing a child into the world in these turbulent times in the quest for justice.  She further elaborated on how her personal struggle and experiences growing up in small-town Texas were not so different from the national stories of tragedy that sparked the Black Lives Matter movement.  “Black Like Me” wasn’t just an anthem of trying to make a larger focus deeply personal.  It was part of a larger commitment from Mickey Guyton to speak her own truth and speak to women when she sang.

Longtime fans and new listeners are latching onto the sound and the messages central to Mickey Guyton songs, as she described in a Boston Herald feature.  Her new EP, “Bridges” is growing a fanbase of its own and Mickey is proving she is a fan of the American farmer by headlining alongside Dustin Lynch, Maddie & Tae, Tyler Farr and Travis Denning in the John Deere “The Farm Must Go On” benefit in Nashville, as noted by Radio.com via MSN.

Girls need a beverage song of their own, says Mickey Guyton

The title song, “Black Like Me,” and “Heaven Down Here,” certainly represent the honest, heartfelt truth-telling side of Mickey Guyton.  There’s a fun, playful side to her artistry, too, and fans are loving her bouncy new song with the reggae vibe, “Rosé.”

“Every guy has a drinking song and we weren’t seeing women have those moments,” Guyton asserts.  True to her newfound pledge, she didn’t see the kind of everyday lady song about a little imbibing after a hard day, so she wrote one.  Not taking anything away from Gretchen Wilson or any others who have mentioned females hoisting a bottle, but Mickey Guyton takes a whole different tack,

Mickey Guyton recalls “a somebody” (of the male persuasion) concerned that “I don’t know if this is the song that will bring Mickey back.” Well, the rose-colored number is racking up streams and views, and fans are inviting the girl with the perfect song to more after-work home parties than ever.  The gentleman’s critique only became another “moment to fuel the fire in me,” dishes out Guyton.  She’ll take another glass of “Rosé” with her girls, too, but not until after she delivers her beautiful baby boy.  For now, maybe she’ll enjoy cherry 7UP as a substitute.

The feel of dust and grit in her boots is familiar to Mickey Guyton, just like her recent glamorous looks on country music’s most notable stages.  Like Jennifer Nettles and other committed ladies of country, Mickey Guyton has made it a personal campaign to see that women have equality in the playlist rotation world of radio.

Even with the acclaim of the recognition earned by Maren Morris, Miranda Lambert, Kelsea Ballerini, and more gifted women than country music has seen since the storied days of the 60s into the 70s, female artists only make up 15% of prime time radio airplay. Luke’s, Eric’s, and Jason’s, along with a few other names, dominate the hours.  Mickey Guyton is out to change that, even if her methods are nontraditional.

The moment is now for Mickey Guyton

Her moment in the spotlight has been 10 years in the making for Mickey Guyton, and she’s not wasting a moment.  She’s taking the stage at the Brooklyn Bowl in Nashville on December 9 for the Farm Rescue efforts of John Deere’s “The Farm Must Go On” benefit.

The virus siege presented problems and unforeseen issues for farmers and farmworkers alike through the pandemic.  Food shortages and supply chain issues are being felt by millions of families. Since 2005, the Farm Rescue initiative has helped farmers suffering from a major illness, natural disaster, or injury to plant, hay, or harvest crops.

“Farmers are essential,” Mickey Guyton emphatically asserted.  The 37-year-old, who spent time in Waco and Arlington, Texas as a girl aims to “shine a light on the struggles they go through.”

Dustin Lynch hardly ever loses his smile, but biology major from Lipscomb University in Nashville knows the roots and the soul of farming, from the ground up.  The “She Cranks My Tractor” hit-maker will have the crowd smiling.  He, Mickey Guyton, and everyone sharing the bill will give fans a memorable night and hopefully, filled coffers for the farmers.

Dustin Lynch hasn’t had the issues with radio airplay that Mickey Guyton and many of her sister female artists have experienced.  Spotify, social media, and her dedicated label president, Cindy Mabe Of Universal Music Group Nashville, have steadfastly opened windows for her gifts to be heard when the typical doors were closed.  No one can hear Mickey Guyton and forget her.  Those windows are becoming bigger and bigger stages now, and she’s ready for her bow.