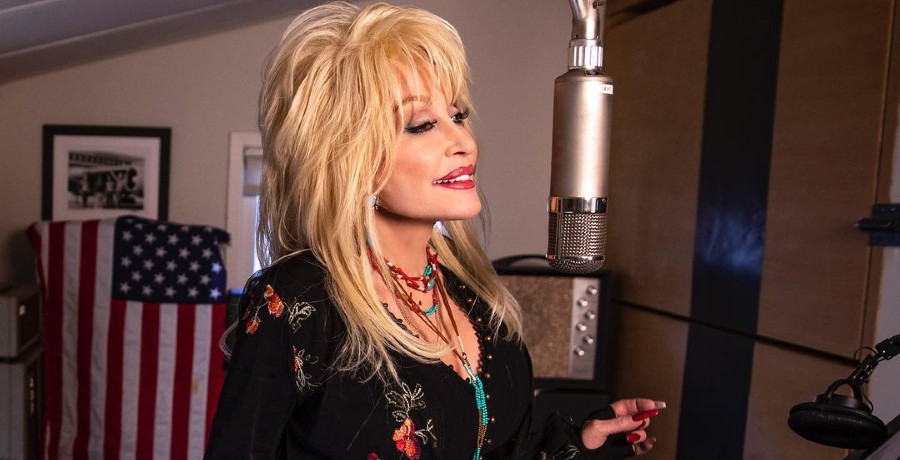 Any time Dolly Parton gets in her “zone” of songwriting, spectacular tunes for the ages flow. The Guinness World Record-honored artist (as the most successful female in music) frequently combines fasting periods with creative getaways.  Parton thrives on cycles of writing songs, sleeping, and waking up to do it all again.  Only Dolly Parton can say she’s written “for 24 hours straight” and delight in the effort.

Dolly doesn’t like to see idle hours slip away.  She wrote her infectious theme song for 9 to 5 on her rhythmic acrylic fingernails, as she demonstrated for Willie Geist on Sunday Today on November 15. She, Jane Fonda, and Lily Tomlin still greet each other by clicking fingernails (sort of a Dolly Parton secret sorority initiation signal), since the sound resembled a typewriter to the intuitive songstress. Parton’s rendition always rivals her girlfriends, given her immaculate manicure.

If only solving the stresses of a divided nation came as easily to the opposing sides as writing heartfelt songs about the common struggles in life, love, and unity does for Dolly Parton, peace would prevail. Dolly has dealt with all kinds of fans, friends, and foes through her 74 years of life thus far. The “When Life Is Good Again” songwriter has kept her place on the highest plateau in country music over more than six decades. She has also remained a beacon of hope for humankind.   As noted by NBC New York, Dolly Parton has very clear ideas on the cause for the national division.  She also has a simple focus to solve the strife.

A bold Dolly Parton declaration on love vs. hate

As always, Dolly Parton is very direct in giving her honest opinion on the state of the nation right now.  “I think we’ve just become so divided ‘cause people just seem to love to hate,” the music icon explained in another segment of Sunday Today. Parton implores that everyone needs to carry the Christmas spirit of love for one another and peace on earth into the coming year.

Even with all the milestones being met recently with more than one vaccine in the running against the virus, there are still miles to go before we are a healed country again.  Dolly Parton knows that heart- healing and racial injustices have to be part of our social mending right along with physical healing.

Dolly Parton has done her part to ring in hope for the season.  Her Christmas album, A Holly Dolly Christmas, contains original gems that celebrate the genuine meaning of Christmas.  There are delicious duets with family and friends, such as “You Are My Christmas,” with Dolly’s brother, Randy Parton.

The inspiration of writing the album songs lit a fire under Dolly to create her Christmas musical, Christmas on the Square, debuting on Netflix on November 22.  Christine Baranski heads the all-star cast, and Debbie Allen designed the dazzling choreography.

Fans without subscription services aren’t left out either. Dolly Parton’s CBS Christmas special airs December 6 on the network.  Besides the Yuletide performances, the hour will be packed with plenty of fun like the Christmas specials with Dolly from the 70s and 80s.

Dolly Parton echoes the same wish that everyone across the world has on this Christmas season,  “Lord knows, I hope next year is better than this one,” the singer proclaims in earnest.  Dolly understands how daunting it can be to face changing the world, especially amidst a global pandemic.  Her advice: Be the change right where you are.

“We can’t save the world, but we can save the world we’re living in,”  meaning the people we interact with every day.  Making just one life better, even a little at a time, can create a legacy of lasting good. Dolly Parton is an example of that generosity.  “Maybe I’m dreaming,” she confesses, “but I don’t think so.”

Along with her discussion of a world in dire need of cheer and hope, Dolly offered some tidbits about her most covered songs.

Jolene was a real little girl who was brave enough to ask Dolly Parton for an autograph.  The character who was the focus of the “other woman” masterpiece by Dolly Parton was inspired by “a pretty girl at the bank” who was helping Parton’s husband with a loan.  At the time, Carl Dean was in asphalt paving as his business.

After a short time of observation in the transaction, Dolly Parton suggested to her husband that “you best get back to the house or it’s going to be you’re a@@ and your fault.”  The couple has been a portrait of support and faithfulness for 54 years, delighting in one another’s diverse personalities.

Dolly doesn’t even remember exactly when she wrote “Jolene” or “I Will Always Love You,” but she explained for CNN per a GQ feature that both songs were recently found among hundreds of others, and both songs were on the same cassette.  To this day, Dolly Parton prefers to record her songs on cassette.  She even teases her goddaughter, Miley Cyrus, about her preferred method on their 2017 duet, “Rainbowland,” in a phone call snippet.

The fact that two such timeless songs are on the same tape together from long ago speaks to the timeless gift of Dolly Parton, one that will last into the future and eternally.