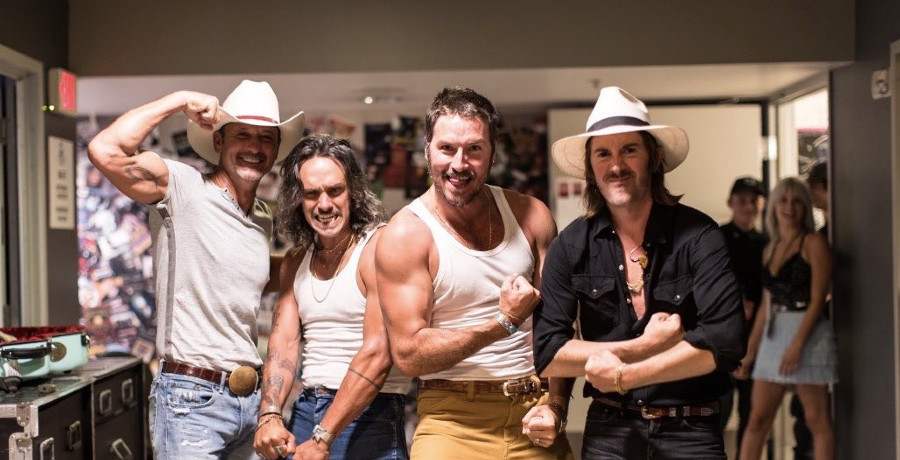 It’s been a long time since country music superstar Tim McGraw or the ageless Willie Nelson have had to fight their way out of a bar after a set. CMT Edge drew a very interesting comparison between the two music giants, and the point is valid.  No faithful fan can ever guess who Tim McGraw or the beloved “Redheaded Stranger” will sing with next.

Tim McGraw masterfully mixed the feel of a mental vacation with the memories and imagery of home in his Here On Earth album, released in August.  Memories and great music join fondly in the just-released compilation of modern classics in McGraw Machine Hits.

The collection only spans the years from 2013-2019, but features indelible collaborations and songs that became part of social consciousness.  “Highway Don’t Care,” “Live Like You Were Dying,” and “Humble and Kind” all qualify in that category.

Nothing moves the heart around the holidays like memories of Mama, and Tim McGraw can’t even play the song,” I Called Mama,” without breaking down on Faith Hill’s comforting shoulder.  When it comes to another inescapable song of the 80s, the man in the famous black hat gives a warm nod to Midland. The teaming of Midland and McGraw makes another nostalgic musical trip more than just another night at the bar.

Another notable difference between Willie Nelson and Tim McGraw is that Willie apparently preserves every divine musical gift that comes his way for the record.  Tim, on the other hand, is especially hard on himself when it comes to his own songwriting.  His approach is that the “song always wins,” and the singer often slashes his own compositions in the final cuts for an album.

Making music together was a breeze for Tim McGraw and Midland, not only because they both are on the Big Machine label, but mostly because the country music cohorts completely agreed on the song they wanted to lovingly re-create.  The Bellamy Brothers’ 1982 hit to soothe every country boy’s soul, “Redneck Girl,” was the only one really in contention.

Tim McGraw even got the word out to fans in a throwback way– he sent an e-mail.  He declared that “this is been a hard year for everyone” and dubbed the selection as “a nice reminder of some old songs that would bring a smile.”  He gave the tip of the hat to “my buddies Midland.   “I always loved this song and used to play it in bars when I was first starting out,” McGraw reminisced, before closing with “I hope you like it.”

David Bellamy was one of the people delighted with the fresh take on his classic.  “We’ve known Tim for years,” Bellamy attested, adding that “we’re big fans of him and Midland,” applauding the performance and production with “Great job, guys!”

More collaborators with Tim McGraw plus a new cover

Besides becoming a trio with Taylor Swift And Keith Urban for “Highway Don’t Care” mentioned earlier, Tim McGraw, Tracy Lawrence, and Kenny Chesney made a marvelous singing trio in 2014 on “Find Out Who Your Friends Are.” The southern drawls meshed as well as the music.  Tim McGraw gave a shout out to Nelly after the “Hot in Herre” hip-hop giant’s sensational run on Dancing with the Stars. Fans have never stopped singing their infectious “Over and Over” over and over.

McGraw Machine Hits also showcases “Meanwhile Back at Mama’s,’’ with a superlative, perfectly delicate performance from Tim McGraw’s favorite duet partner,  Faith Hill.  Catherine Dunn does her turn on “Diamond Rings and Old Barstools.”  A bonus track of The Cars’ “Drive” makes the journey of the album definitely a worthwhile trip.

Fans swooned to see the 53-year-old Tim McGraw showing off his gray beard for his 2020 ACM Awards performance.  They’ll be able to see the same look again when McGraw appears on CMA Country Christmas on November 30.

Anyone serving up the song, “Gravy” along with a holiday feast should be prepared for the emotional pipes to burst.  Have tissues handy for anyone at the table.   Tim McGraw released the tender video for the song this week.  Every frame is a montage of family memories, including the growing years for Tim McGraw and Faith Hill’s three daughters, Gracie McGraw, now Broadway-bound, Maggie, and Audrey.  Dad’s and grandpa’s are there, including a frame with Tug McGraw.  The tears are sure bets, but a little bawling before the ballgames never hurt.  This one-man music machine and family man loves to share a song and savor the sweet times.  They always get better with age.