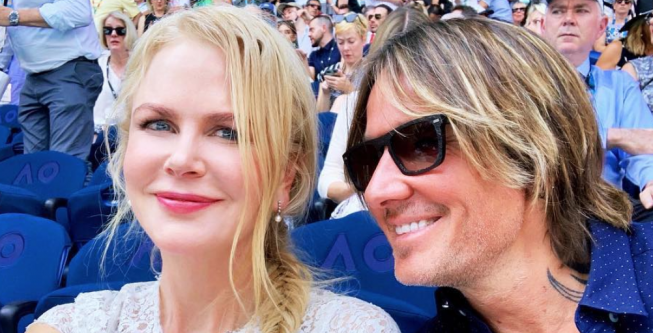 Leave it to country superstar Keith Urban to completely slay (and shred on the guitar) a razzle-dazzle star-filled finale of live TV.   The energetic and always amiable Keith Urban topped off The Voice Season 19 finale this week with a sublime duet of his smash hit with Pink, “One Too Many.”

Keith Urban has made beautiful music with Carrie Underwood, Taylor Swift, and a number of other top-tier ladies in country music.  In life, however, the “Where The Blacktop Ends” singer steered his life to the road of right direction when he met his wife, Nicole Kidman. Notably, Kidman is an Oscar-winning actress.  Despite their differences in creative professional pursuits, the couple has become country music royalty. They nestled down into Tennessee life outside Nashville. And consequently, love raising their daughters, Sunday Rose,12, and Faith Margaret, 9, in a close community environment.

Keith Urban explains how Nicole transformed his life on many occasions. Notably, she openly displays her devotion to her talented husband.  In a Showbiz Cheat Sheet feature, Nicole describes one particular morning that Keith confirms that he is the man destined to be hers for life.

Going from crush to connection for Keith Urban and Nicole Kidman

It’s a rare thing when any megastar takes a few moments to meditate on life’s most important moments.  Keith Urban pauses to ponder on his personal high points in a recent podcast.  The list is brief but beautiful.  “Meeting and marrying Nic” takes first place. He follows with “having kids.” The master musician understands that those cherished moments could never be realized without the third significant life event, “getting sober.”

Nicole readily admits that she had a big crush on Keith Urban. This crush blossoms from their first brief meeting at the G’Day USA Gala in 2005. Keith was awestruck by the “aura” of the brilliant and dedicated actress.  He realized he wasn’t in the healthiest place in his life.  He didn’t think he stood a chance with Kidman. This is since the woman who keeps designers begging that she will wear their creations.  She gave him her phone number. However, it was four months before he called.

Fears of falling all over himself in conversation quickly left for Keith Urban once he “plucked up the courage” to punch Nicole’s numbers.   During a 2018 Australian talk show interview, the artist reveals that almost the moment Nicole Kidman answers the phone the duo clicked. The rest is history as the two “talked and talked and talked” with complete ease.

The passionate life partners would never have nearly 15 years of wedded bliss if Keith Urban had not “plucked up the courage” for that call.  He sings about love, dreams about love, hopes, and prays for love, but never experienced true love.  The “slow transition” to becoming the man he always wanted to be started with the phone call and the meeting of a lifetime.

Nicole Kidman is the celebrated guest at Oscar after-parties, Hollywood soirees, and every kind of A-List bash imaginable.  Keith Urban extends a lovely bouquet on her doorstep.  The gift made an indelible impression on the woman of “strong faith.” She had the certainty that day that Keith was the man meant for her.  The memory still glows in her mind.

“If it was my (38th) birthday and he stood outside with gardenias at 5 AM on my stoop,” Kidman recollects.  At the time, the actress was in her New York home.  She relates that the sweet act of caring prompted the assurance that “This is the man I hope I get to marry.”

The only way to make a birthday that starts with a personally-delivered bouquet better is a motorbike ride to Woodstock.  Nicole Kidman clung to Keith Urban and knew he was the one.  Chalk it up to being an actress, knowing about romance, being a romantic, or simply leaning on faith. “I just believed ‘OK, here he is.’’

Fate fulfill in an instant.  It can be in an answered phone call or an answered prayer.  Keith Urban and Nicole Kidman might say it doesn’t even take gardenias but they never hurt in a quest for love.