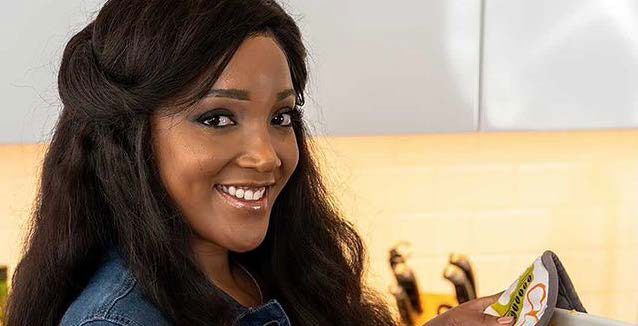 The Christmas season is sacred and blessed for many reasons. Coincidentally, Mickey Guyton is celebrating a particularly blessed season of her own.  Christmas represents ultimate redemption, and the country music songstress almost gave up on redeeming her hard-fought career a few years ago.  Truth, transparency, and light came to Mickey Guyton in a more penetrating way than ever, as she explained on Today this morning, December 21.

Mickey Guyton is the same artist, with the same extraordinary voice and talent for creating songs that she’s always had.  The difference is her decision to stand, speak, write, and sing from her personal truths.  Everyone hears the power of her message now.  Guyton has earned a historic Grammy nomination for Best Country Solo Performance.   She understands that the nod represents much more than a personal moment of acclaim for her.  The expectant mom also shares some sweet personal news– her still to arrive son with her husband, Grant Savoy, has a name!

Her Grammy moment is still processing for Mickey Guyton

In the tradition of a Texas native, Mickey Guyton displayed perfect courtesy.  “It’s so good to see you,” she gushed to Hoda Kotb, a sister “shero” of color and groundbreaking success.  Shuffling back to her Grammy honor for “Black Like Me,” Mickey Guyton relates how “You have these dreams of being Grammy-nominated, and when you hear those words, it just doesn’t seem possible or real.” “I’m still trying to process that, to be honest.”

What the soaring vocalist and songwriter does not doubt is that “this award is so much bigger” than her or her penetrating song.  “This is for all Black women.”  Mickey Guyton reiterated the words of her social media response to the nomination, relating that this recognition was for all those unseen, unheard, or put in a corner.  Kotb assured Mickey that “your face said it all over again” just hearing the introduction before the interview.  The fourth-hour Today host and anchor couldn’t resist a playback of Mickey Guyton’s initial, emotional reaction to her nomination.

“That cry face!” Guyton exclaimed. “We’ve all got that,” Kotb supported.  Quite a few more supporters have joined Mickey Guyton’s cheering section.

We spoke with country singer @MickeyGuyton after she received her first Grammy nomination! She tells us about that special moment and how she got to this historical moment. pic.twitter.com/Z9RHdm447w

Dionne Warwick made the names of Burt Bacharach and Hal David as synonymous with hit songs of the 60s and 70s as her own.  Her gift for interpretation of the songwriters’ classics brought simultaneous success to their unparalleled collaboration.

When Dionne Warwick took to social media to say that “Mickey Guyton is standing in her power of the country music artist,” the hitmaker didn’t just leave it at singular praise.  “People of color deserve seats at every table,” the “Walk on By” singer asserted.

Mickey Guyton has some pretty heavy-hitting friends in the country music world.  Maren Morris and Kelsea Ballerini are not shy about spreading her name from some pretty prominent platforms.

For her part, Mickey Guyton understands that she has to follow the advice of Booker T. Washington.  “If you want to lift yourself, you have to lift somebody else,” Guyton stresses.  In a talk with Color Me Country host and pioneering black female artist, Rissi Palmer, Mickey Guyton made it clear that any Black artist who achieves success must hold the door open for the next rising Black artist.  The songwriter paid tribute to Palmer as “the head majorette,” with Guyton following her lead.  The Grammy nominee is also trying to emulate Palmer in leading with love.

Speaking of love, Mickey Guyton announced on Today that she and her hubby have a name for their boy.  His dad and dad’s best friend will be represented in the next generation.

The baby boy has a name

Hoda Kotb calculated that by the time of the Grammy ceremony on January 31, the 37-year-old singer-songwriter will be nine months pregnant.   Babies and Grammy nights are no respecters of timing.  Today’s interview, however, was perfect timing for Mickey Guyton to tell the world the name of the beautiful son, who will arrive in February.

“We’ve decided on Grayson Clark,” the excited mommy revealed.  “My husband’s name is Grant, and his best friend, who passed away last year, is Tyson.  So we combined the two”  Grammy coincidence, notwithstanding, Mickey Guyton admits that “I’m terrified” as a first-time mother.  She’s also absolutely in love with the infant son who she just wants to lift up and support in “whatever he chooses his life to be.” From the time she saw her son’s face on a sonogram, the love was overwhelming.

For the last month, Mickey Guyton has worn all Christmas colors.  The singer wore a deep green shade in her silky blouse to announce the Gospel, Contemporary Christian, Roots, and Spoken Word, Grammy nominees.  When she sang “O Holy Night” for her CBS Thanksgiving appearance, she was a vision in white, complete with a stunning hooded cape.  She was backlit by glowing candles and backed by a gospel ensemble.  No other artist on the broadcast surpassed her emotion, range, or soulful interpretation of the Christmas classic.

Mickey Guyton performed “O Holy Night” again on Today.  This time, she donned red velvet and cradled her womb through the moving opening verse.  The look was luscious, but the meaning was more than potent in the prerecorded performance for Apple music’s “Carols Covered” series.  The high notes take Guyton to her soulful heights. Her added flourish to “Christ is the Lord/Praise His name forever” and the closing, powerful “Noel,” which in Christmas context translates “shouts of good news” sound glorious enough to give anyone Christmas spirit.  Mickey Guyton has many reasons to rejoice through this joyous season.

Jimmie Allen Puts The APB Out On ‘On My Way’ With Jennifer Lopez
Kelly Clarkson Listens To Fans & Delivers — Here’s How
Maren Morris’ Tour Bus Is Far From Humble
Keith Urban Relies On Marital Devotion For Sobriety?
Carrie Underwood Hearkens Back To Signature Style On New Tune