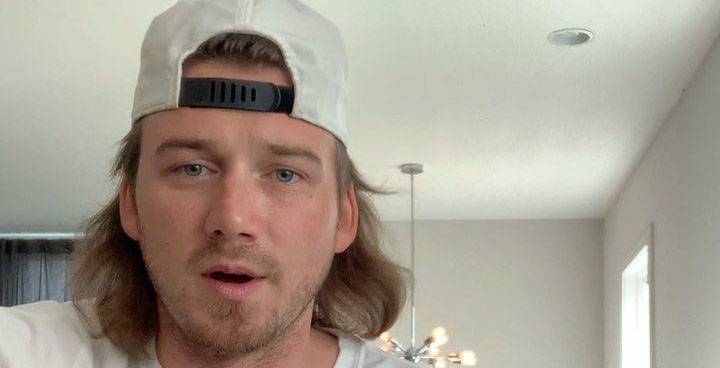 After nearly ten days since TMZ got a video from Morgan Wallen’s neighbor depicting Wallen using the n-word, the Country star takes to his Instagram to issue his apology. Watch the full video here.

Morgan Wallen begins the five-minute video by introducing himself and admitting that this is “long overdue.”  Wallen goes on to explain what caused the delay in his response to this controversy. He says he sought guidance and “wanted to come to ya’ll with a complete thought.”  Understandably, it seems that he was blindsided by the video. However, that doesn’t discount his actions.

According to Morgan Wallen, he wrote many things in his apology. Unfortunately, only “a portion of those were used,” says Wallen. And he goes on to say that that “painted [him] in an even more careless light.”  It seems that one of the reasons for this Instagram video is so that Morgan Wallen can show fans that “that’s not the truth.”

To put the TMZ video into context, Morgan Wallen gives a timeline. He shares that the video is in hour 72 of a “72-hour bender”.  By Wallen’s body language, fans can recognize that this video is not easy for him. And he even says, “that’s not something I’m proud of either.”

He explains “the natural thing to do is to apologize and continue to apologize.” After a brief pause, he adds, “because you got caught.” Furthermore, he states, “that’s not something I want to do.” He recognizes that he let a lot of people down. Wallen lists his parents and his son. He also says, “He’s not okay with that.”

Morgan Wallen provides an additional explanation for the delay in his response outside of the brief apology TMZ published with the release of the video. Wallen explains that he wanted to apologize to the people closest to him first.

The “Livin’ The Dream” Singer Takes Ownership Over His Actions.

Seemingly, Wallen is taking ownership of his actions. He lets fans know that over the past week, he’s been in contact with leaders of black organizations. It seems that they have reached out to him to involve him in some difficult conversations due to Wallen’s careless use of the n-word. Being vulnerable with his followers, he admits that he “was nervous to accept those invitations.” Graciously, Wallen explains that he was nervous because the invitations came from “the very people [he] hurt.” Realizing his actions, it seems, Wallen says “they had every right to step on my neck while I was down.” Furthermore, he shares that they didn’t have to “show him grace, but they did the exact opposite.” Not only did the members of the Black community show him grace, but they “paired that with the offer to learn, and to grow,” says Wallen.

Ultimately, Wallen explains that the kindness that’s been given to him during this situation “inspired” him. He shares that he wants to “dig deeper and do something about this.” Through his reflection on this event, he shares one thing that he’s learned. Wallen explains that “his words matter.”  “A word can truly hurt a person. And in my core that’s not what I’m okay with,” says Wallen.

Will Wallen Give Up Alcohol?

Many fans have speculated that Morgan Wallen has a problem with alcohol. Some fans have even pointed out that his song “Livin’ the Dream” seems familiar to some of the trouble Wallen has been in in the recent past. Specifically the lyrics below.

I look like a rockstar, in and out of cop cars
Livin’ out a suitcase, trashin’ hotel bars
If I see the sunrise, it’s ’cause I stayed up all night
Drinkin’ ’cause I need to, damn it, what a good life”

Consequently, it seems that Wallen recognizes that alcohol is a problem for him. He shares that he wants to “end this video on a positive note.” He goes on to let his followers know that he’s been sober for nine days. However, he acknowledges that nine days isn’t that long. But, he shares that it is long enough to know that “the man in that video isn’t who I want to be.”

Morgan Wallen is Going Back “Off The Grid”

Much like his last apology video, he explains that he’s going to take some time “off the grid.” He doesn’t know if he’ll be able to “live down all the mistakes [he’s] made, but [he’s] certainly gonna try.” He wants to take some time “living healthy and being proud of his actions.”

Honorably, he concludes the video by saying that he appreciates the people that “still see something in [him]” and the people that “defend him.” However, he takes ownership of his actions and asks people to quit defending him over this incident.  He assures fans that he will “keep searching for ways to become the example instead of being made one.”

Morgan Wallen wraps the video up by saying he’s not a “holy roller” but a specific Bible passage came to him this week. He shares 1 Corinthians 13:11 with his followers. It reads as follows.

Wallens says, “that’s what I’m gonna be doin’ for the next little bit.”

How do you feel about Morgan Wallen’s latest apology? Let us know in the comment section below. Come back to Country Music Alley for more news about your favorite Country stars.