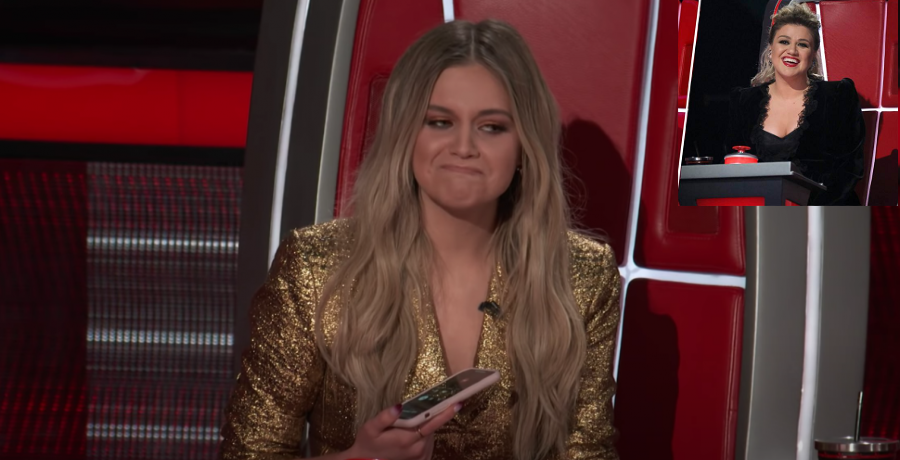 Kelly Clarkson finally broke her silence about her absence on The Voice. The coach has been a no-show on the latest episode. As Country Music Alley previously reported, Kelsea Ballerini sat in her place. The young country star was happy to do it for her friend.

There was mixed reaction to this news. Some fans missed Kelly and couldn’t wait to see her return to the show. Others loved the sense of girl power among Kelsea and Kelly. They liked that the “Hole in the Bottle” stepped up to the plate for her good friend. But some were confused and even displeased to see Kelsea in replace of Kelly.

Where did Kelly Clarkson go?

The Voice has moved past the auditions and is now onto its first battle round. Usually, Blake Shelton, Kelly Clarkson, John Legend, and Nick Jonas compete against each other to create their own epic teams. But Monday night’s episode revealed that Kelly is noticeably absent from the show. Instead, country music artist Kelsea Ballerini will take her place for a few episodes.

The Tennessee native will sit in for Kelsea during the battle rounds. Host Carson Daly revealed that Kelly was under the weather and had to miss a few tapings. Kelly took to Instagram to confirm that she wasn’t feeling well when the battle round episodes were filmed. But she appreciated Kelsea’s help.

“Thank you so much @KelseaBallerini for sitting in for me while I was feeling under the weather!” Kelly wrote in the caption. “I know my team is in great hands with you!! Y’all aren’t going to want to miss this!! The battles start next week on @NBCTheVoice!”

Thank you so much @KelseaBallerini for sitting in for me while I was feeling under the weather! I know my team is in great hands with you!! Y'all aren't going to want to miss this!! The battles start next week on @NBCTheVoice! #TeamKelly #TheVoice pic.twitter.com/qA7qSOpk5y

Kelsea took to the comments section to respond: “BIGGEST HONOR EVER and you know I got you.” However, Kelly hasn’t confirmed when she will return to The Voice. According to GoldDerby.com, she may not return for “several weeks” since the battle rounds last from three to five episodes. Fans will see Kelsea for at least one more week.

Kelsea Ballerini shares her side of the story

Kelsea Ballerini explained why she had to cover for Kelly Clarkson on The Voice. In a new interview with Entertainment Tonight, she admitted that she only received a day’s notice. So, she had very little time to prepare for the singing competition. But the songstress took on the challenge quite well.

“I was home in Nashville and got a text from Kelly at like 9 p.m., like ‘Hey girl… I’m not feeling well. I don’t have COVID, but with the protocols, [I] don’t feel safe going to set, could you cover the Battle Rounds for me?” Kelsea explained. “So I got on the plane, studied everything, and watched everything. Landed, hair and makeup, set, said hi to Nick Jonas and John Legend and Blake Shelton, got in Kelly’s seat, and said ‘Fake it till you make it!”

when @kellyclarkson calls and asks you to keep her seat warm, you put all those years of being her super fan to work. thank you @johnlegend @nickjonas and ole pops @blakeshelton 😂 for making me feel like part of the @NBCTheVoice family. pic.twitter.com/Gst97bdhDU

The “Homecoming Queen?” singer joked that she had to “just pretend she was Kelly.” She even bantered with Blake Shelton, much like Kelly does on the show. Kelsea told ET Online that Kelly was even watching a live stream of the episode “and picking on Blake the whole time.” As for Kelsea, she “really enjoyed” her time on the show, especially since she had no time to get nervous about it.

What are your thoughts on Kelsea replacing Kelly during the battle rounds? Do you miss Kelly on the show? Sound off below in the comments.