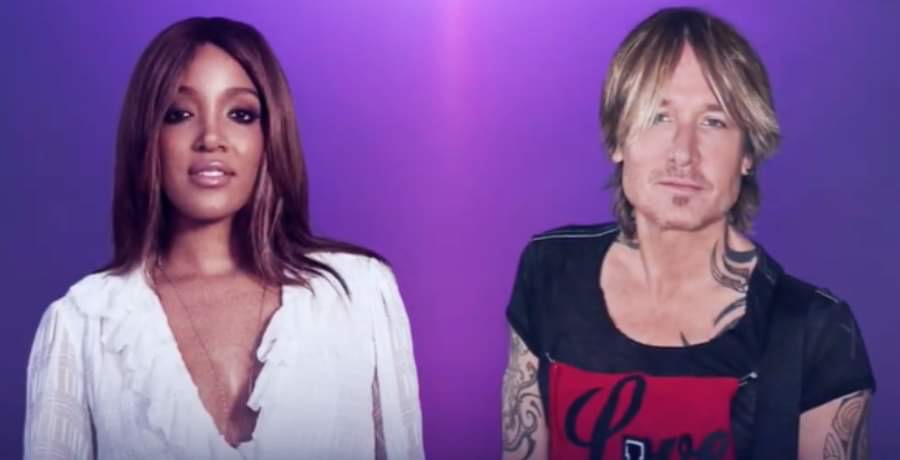 It’s beyond obvious that Keith Urban and Mickey Guyton get a real kick out of making history together.  The good friends and collaborators are getting the best reviews ever in the run-up to the 2021 Academy of Country Music Awards, airing this Sunday, April 18.  Hosting any major awards ceremony is both a heady honor and a heavy responsibility.  After taking the stage together at last year’s ACM proceedings, and stunning everyone in earshot with their moving performance of “What Are You Gonna Tell Her?,” Mickey Guyton and Keith Urban knew they had chemistry and connection, even without saying a word. The ballad’s piercing truth, Guyton’s soaring range, and Keith Urban’s stalwart presence and immaculate accompaniment on piano provided all the message needed.

These days, the co-hosts can’t say enough about their excitement in partnering for one of the premier events in all of country music.  The Houston Chronicle got a preview of some of the fun plans for this special Sunday.  Feathers and sparkle come with the package!  Mickey Guyton and Keith Urban mustered plenty of playful teasing when they chatted with Access Hollywood, too.  Trading duties at the podium is only a tiny part of why this ACM ceremony is already the most colorful, and important, in history.

When it comes to musicianship, few artists have the chops to even come near Keith Urban.  He not only plays anything with a string like a maestro, but the “Somebody Like You” singer invented his own instrument, the “ganjo,” and covers genres from country music classics to rock anthems.  The “Start a Band” collaborator wasn’t quite ready for Mickey Guyton’s surprise when she asked him to play for her momentous 2020 moment on the ACM stage.

Urban was thrilled to be part of Mickey’s “great song,” but was taken aback when she told the 15-time ACM Award winner that he was playing the piano. “I’ll just kind of hide in the band,” Keith initially considers. Guyton quickly squelched that possibility.  “There’s no band,” she assured.  “Just you and me…”

Longtime fans fully attest to the fact that Keith Urban slays on piano, too.  Just take a listen to “Tonight. I Wanna Cry.” Still, for this groundbreaking, and truly life-changing performance, the conscientious Urban proved to Mickey Guyton that he was shaking. She graciously put him at total ease, and the rest is history.

The co-host pals played it coy when the possibility of “performing together” arose, but with a star-studded lineup of 29 performances set to take to the stage, some kind of Mickey Guyton/Keith Urban duet has to happen.  When it comes to costume changes, though, no one touches Mickey’s couture for the night.

Mickey Guyton tops Keith Urban by at least 4 to 1

“I’m ready for all the things,” Mickey Guyton gushes over the night’s surprises just a day away.  One of those things is the variety of gowns altered and ready for the songstress for this evening like no other. Mickey only discloses that “four, maybe five,” wardrobe changes will happen.  Every fan knows that a tailored T-shirt and jeans are the preferred outfit for Keith Urban.  The megastar declares that “one” will be the number of dress opportunities for him.  “I’m going for Larry the Cable Guy,” Keith teases before he and Mickey throw in a “Git ‘er done!” in unison.

“Does that make me the Supremes?” Keith Urban quizzes.  After a promise of some “lace front wigs” from his partner, “Then you’re in,” Mickey Guyton responds.  “I like it,” says Urban. Anything can happen with these up-for-anything cohorts, and a night of color is a welcome change for country music.

Keith and Mickey welcome a new direction and diapers

“Country music is about community,” Keith Urban stressed on CBS This Morning. “It’s finally going where it needs to be.” Mickey Guyton’s memories of slurs from her early days still bring tears.  She doesn’t endorse that anyone becomes canceled, but rather, she urges that they “do the learning” from their mistakes.  The “Black Like Me” songstress understands her power in standing in her own truth and singing it out loud.

Mickey Guyton is likely the only co-host of the ACM Awards who does a “praise dance” at the news of getting an invitation from Keith Urban.  Both co-hosts have the chance to leave the night with awards, but no matter what the trophy tally comes to, the Texas native is determined to stay a “trailblazer” and a “door-opener” for artists of color or other unheard voices.  This remarkable year is only the start of her lasting legacy.  She celebrates her debut album releasing this summer, and her favorite first experience is providing lots of hands-on practice and inspiration.

New skills for the working mom

“I can change a diaper like that!” first-time mommy Mickey Guyton demonstrates with her hands.  “And I can take a nap just like that!” Keith Urban interjects wryly.  Sadly, the father of two beautiful daughters hasn’t seen Mickey’s baby son, Grayson, yet. A person-to-person encounter is still on hold, thanks to public health circumstances.

He is perhaps a little rusty on diaper-changing skills, however, Keith Urban knows Mickey Guyton is a stellar artist who is meant to stay.  When the question comes on what he wants the world to see in his co-host, his answer brings Mickey Guyton to genuine tears.

“Her heart, her spirit, and her light,” Keith Urban echoes with no hesitation.  Tune in for a country music night of celebration like no other at the ACM Awards, and stay tuned into Country Music Alley for the latest on the stars and the music you love!