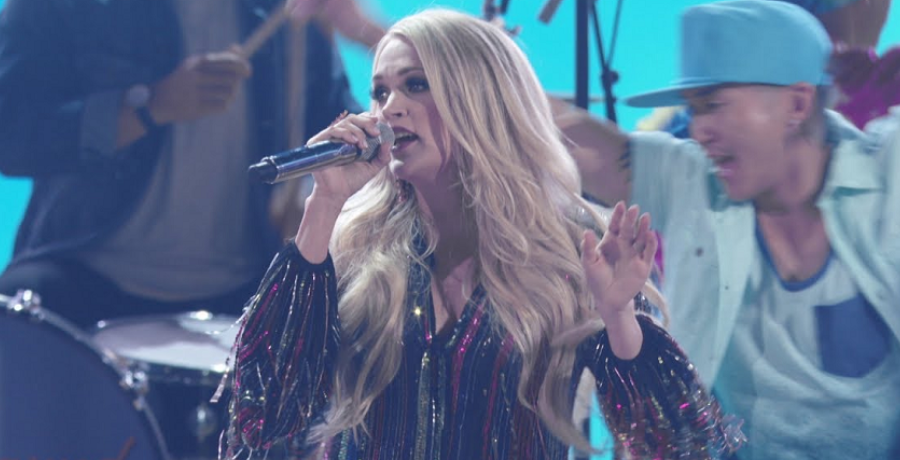 Carrie Underwood, Luke Bryan, and others teased their upcoming residencies in Las Vegas. The coronavirus pandemic halted all country music concerts and tours. Fans have been impatiently waiting for the return of stadium tours and live shows. However, it could happen sooner rather than later.

Now that most of the country is getting the COVID-19 vaccine, Vegas is setting its sights on new entertainment. Resorts World Las Vegas will make its big comeback in the next few weeks. The company announced the upcoming summer 2021 residencies starring Underwood and Bryan. This could mean that Bryan’s upcoming summer tour will be pushed back as originally assumed.

On Thursday, April 22, Resort World Las Vegas dropped a mini film that featured Carrie Underwood, Luke Bryan, Katy Perry, Celine Dion, Tiësto, Zedd, and more in a commercial that teases the “sneak peek of the astounding entertainment” coming to Sin City this summer. The resort is gearing up to open on Thursday, June 24.

“The concept of Stay Fabulous captures the essence of the Resorts World Las Vegas brand where guests are encouraged to embrace their individuality and create their own version of fabulous,” said Scott Sibella, president of Resorts World Las Vegas, says in the press release. “With stunning visuals and special appearances from A-list entertainers, the commercial gives a peek into the incredible experiences that await when our doors open this June.”

The video shows Perry dressed as a mermaid alongside her fellow American Idol judge Luke Bryan. Then, it flashes over to Underwood, who floats away on an island, before it pans over to Zedd and Tiësto’s EDM paradise. Next, Celine Dion makes an appearance inside a pinball machine. Check out the wonderful and whacky film in the video below.

Dion is one of the biggest Las Vegas performers of all time. Per People, this is her big return to the city since ending her 16-year residency at The Colosseum at Caesars Palace in 2019. It was so successful that she decided to return for another run. Bryan, Perry, and Underwood are newcomers to the Las Vegas residencies.

On Sunday night, April 18, Luke Bryan won the top ACM Award. However, he was not in attendance. The country star was still recovering at home from COVID-19. But just a day later, he appeared on the next live taping of American Idol. Bryan credited his wife, Caroline, for helping him recover so quickly.

Carrie Underwood brought gospel music to the Academy of Country Music Awards. She performed alongside gospel legend CeCe Winans. The two ladies performed songs from Underwood’s new album, My Savior. First, they started with “Amazing Grace” and then transitioned into “Great Is Thy Faithfulness.”

Underwood previously held a virtual concert on Easter Sunday in support of her album. Meanwhile, Bryan’s next concert scheduled for Youngstown, Ohio was canceled. It’s also unclear what will happen with his summer 2021 tour. Stay tuned to Country Music Alley for more information.

Would you watch Carrie Underwood and Luke Bryan in Las Vegas? Sound off below in the comments.