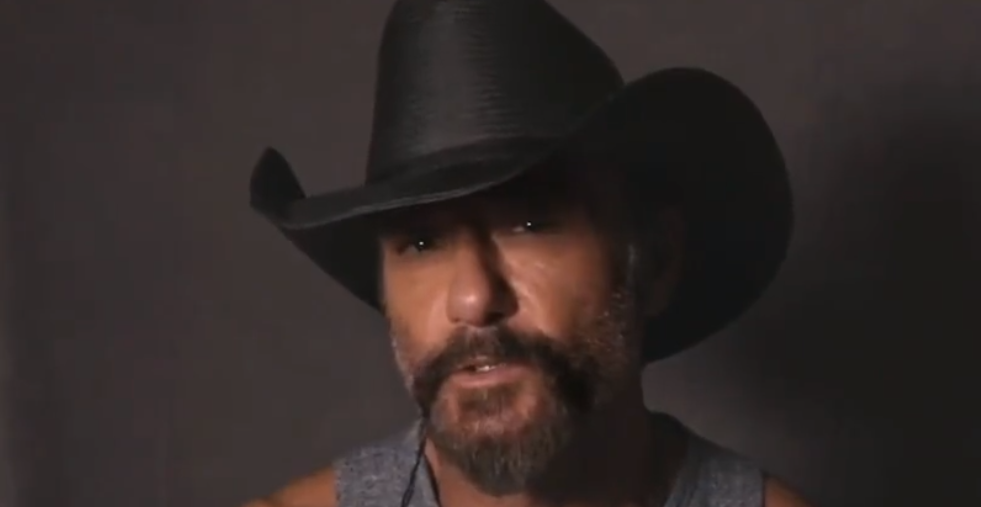 Country fans on TikTok got a surprise on Monday when Tim McGraw posted a reaction video of a girl covering one of his classic hit songs. Find out what Tim had to say about the performance and how his fans reacted to it.

Tim McGraw may be relatively new to TikTok, but he’s certainly not new to the country music charts. In fact, at 54 years old, Tim’s musical catalog spans more than 20 years. Despite being one of the most seasoned artists still in the game, Tim’s music continues to bring in fans of all ages. While some young fans are just discovering his music, some, like up-and-coming country artist Alexandra Kay, have been listening to the legend their whole life.

On Monday, McGraw’s fans got to see him blind react to a TikTok cover of his 1994 hit song, ‘Don’t Take The Girl.’ In the vid, Tim sits at his kitchen counter, with cold coffee in front of him. The video is split screen and on the other side, a young woman sits in a similar setup, making her own coffee. When the video begins, the intro to the classic song starts to play and the young girl begins a light and airy rendition of the song. As she sings through the verse and chorus, Tim watches on in awe, with a huge smile on his face. He appeared genuinely touched and flattered by the video.

‘How awesome is this coffee cover by @alexandrakaymusic,” the superstar wrote in the caption, “Cheers to starting the week off right.”

Who is Alexandra Kay?

In the comments of Tim McGraw’s reaction post, hundreds of fans wanted to know why Tim hadn’t plucked her up and gotten her signed. ‘Who is this girl?’ ‘Why isn’t she famous?’ The fans went on and on about the young singer’s vocal talent. Many compared her style to Dolly Parton while others were dubbing her the next Allison Krause.

Clearly, this girl has some pipes – so why isn’t she a household name? Well, the truth is, while many of the fans on the post just automatically assumed she was just an amateur vocalist looking for some exposure on TikTok, Alexandra Kay is actually a lot further on in her career than they realize. In fact, this 30-year-old Illinois native has a massive following on social media and is currently on a nationwide tour.

According to Sounds Like Nashville, Alexandra Kay has been in the industry for some time – slowly building her following in country music as an independent artist. She appeared in seasons of both American Idol and The Voice. Additionally, Alexandra starred in the Netflix Original series, Westside back in 2018.

The Power Of Social Media

This up-and-coming country diva has amassed an impressive social media following over the last few years. In fact, on TikTok alone, she has more than 2.2 million followers. The singer regularly posts videos of herself performing covers in addition to her own music.

#duet with @timmcgraw so this has been the crazies 24hrs ever! Thank you Tim! 🥺

Beyond TikTok, she also carries more than 500K Facebook followers and another 126k  on Instagram. The exposure has created opportunities for her to work with some amazing producers and has independently released a number of songs including her two widely popular singles from 2020, “I Kinda Don’t,” and “All The Cowboys.” Both of these songs dropped online and quickly made their way to #1 on Itunes Country charts. This was a huge accomplishment, and nearly unheard of for independent, unsigned artists.

Currently, Alexandra Kay is on the road and could be coming to a city near you. The up-and-coming artist is currently on a nationwide tour with another breakthrough independent artist, Cooper Alan. Their show also features performances from a third indy country singer, Thomas Mac. Dubbed the ‘In Real Life Tour,’ these performances are a celebration of the power of social media and how through their videos they were able to reach fans all over the world and bring them together over music.

Co-headliner Cooper Alan has also built a ginormous social media following on Tiktok. He has more than 4.5 million subscribers currently and the number grows every day. Notorious for his songwriting skills and traditional country, Cooper is proud of his journey as an indie artist and was even recognized by CMT in a news segment called “Hot Prospects.”  The network featured Cooper’s story and told their audience about his career, music and, social media following.

You can catch Alexandra Kay and her buddy Cooper on social media or live at one of their upcoming shows.