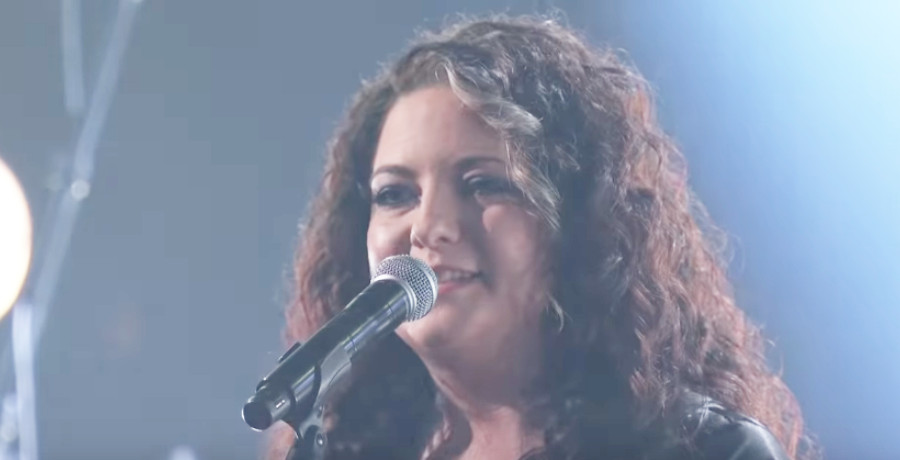 Ashley McBryde knows more than a thing or two more than a thing or two about rough rides in life. Instead of swallowing the standard formula for female singers in Nashville, the straight-shooting country music singer-songwriter forges her own path to career satisfaction and success.  The “Girl Goin’ Nowhere” artist even demonstrates the guts to take the shaming words of her teacher spewed out in front of the class and transforms them into Grammy-nominated glory.

From emotional gut-punches to head concussions like the one delivered to Ashley McBryde on a horseback riding adventure in Montana, this “Never Will” artist never surrenders to any setback and aims to be back on her performing horse very soon.   In the meantime, Ashley McBryde reminisces with American Songwriter on how one of her most beloved ballads, “A Bible and a .44,” came to be.

The strings meant a spanking for Ashley McBryde

Notably, Ashley McBryde heightens nothing in the title of “A Bible and a .44”  the image and the juxtaposition of the two items vividly represent all she saw as the life-essential tools for her father, preacher William C. McBryde, as she came of age in Saddle, Arkansas.

On some levels, the only way to see the relationship between Ashley McBryde and her father is strained and complicated.  Country Music Alley relates in a November 2020 feature how William McBryde begged his daughter to become a doctor even after she found success following her dreams to the country music stage. Furthermore, McBryde describes how her father felt “proud for her,” yet could never muster the sense of feeling “proud of” his daughter.  Still, perhaps in ways only she knows, “A Bible and a .44” captures the fullest dynamic of her patriarch.  “He raised us as mean as that sounds, and as sweet as that sounds” Ashley McBryde describes of the song.

“I used to get spanking when I was little for playing it,” Ashley McBryde reflects on her dad’s Martin D-35S guitar. Nonetheless, she couldn’t resist the temptation when she was home for his 70th birthday.  Preacher McBryde was away, and the memories poured into the verses of the moving ballad that brings audiences to floods of tears from the stage.

A gift and a legacy

Months later, her father willingly gave his daughter the guitar after hearing her play this song for him alone. Strikingly, she reminds him “That’s not my guitar.  Someday it will be, but it’s not mine now.”  In response, the parent regrets that he can’t watch her play the instrument after he’s gone (apart from the view from celestial realms).  “I’d like to see you play it,” the elder McBryde insists.  Not surprisingly, Ashley McBryde gushes that the song “makes me tear up.”

In contrast, Ashley McBryde elatedly recalls her near-disbelief and tears of jubilation at seeing words flash across her phone confirming that Trisha Yearwood (with Patti Loveless) recorded her rendition of “A Bible and a .44.”  Likely, the sensation resembles something of the same feeling as when Eric Church called Ashley McBryde on stage to sing the song with him in 2017. Not to forget, Garth Brooks also sang “Girl Goin’ Nowhere” from his stages in 2018.

Ashley goes one stirrup down, but she’s on the mend

Per the concern of her faithful fans, a grateful and always candid Ashley McBryde shared a Facebook message relating her account of the Montana horseback riding incident.  As McBryde points out, she grew up riding “a fair amount” in her youth, but by no means is a skilled horsewoman.  Starting out, the first half of her ride on a young mare named Jenny was smooth.  On the way back, however, something spooked the horse and Ashley McBryde’s right foot slipped outside the stirrup.

At one juncture, Ashley McBryde and Jenny pass the ranch owner and the singer calls out that she’s lost a stirrup and “may go over.”  Indeed, Ashley does get tossed.  Initially, the musician thought only her shoulder took the brunt of the fall, but ER scans showed a “pretty harsh” concussion requiring stitches to the scalp.

“You know me,” Ashley McBryde assures, declaring that she ever sees fit to postpone a show for “bumps and bruises.” At present, though, the award-winner needs assistance to walk.  Not to worry, Ashley promises that “as soon as I am able to walk across a stage again, that is exactly where you’ll find me.”  Nothing keeps Ashley McBryde from the people she loves most– her band and her audiences.  Some healing simply takes longer than anyone thinks.  Ashley McBryde understands she has a lot to be thankful for and lots of dates ahead on her This Town Talks Tour.

No worries over new songs

As it happens, Garth Brooks remembers his days of fighting his way into bars to play and fighting his way back out the door, as he often retells onstage. Ashley McBryde has some of those same stories to tell.  No doubt, some of the new music fans yearn for is from her writing sessions with “The Thunder Rolls” hitmaker.  On his end, Brooks only gushes that the entire experience of seeing Ashley work is “pretty freakin’ cool,” so much so that the guys in the room pretty much stayed out of the way during the springtime sessions.

Understandably, like many of her cohorts, Ashley McBryde admits to being “pretty pouty” at the start of the pandemic quarantine.  Returning to writing, however, resulted in a bumper crop of compositions, numbering “in the hundreds,” McBryde ascertains, “and some of them are even good.” The remote “house in the woods” provoked enough creativity to fill at least three future albums.  Not counting her All-Star collaborations, the music is sure to keep Ashley McBryde and her Trybe singing for as long as her loyal fans yell for more.