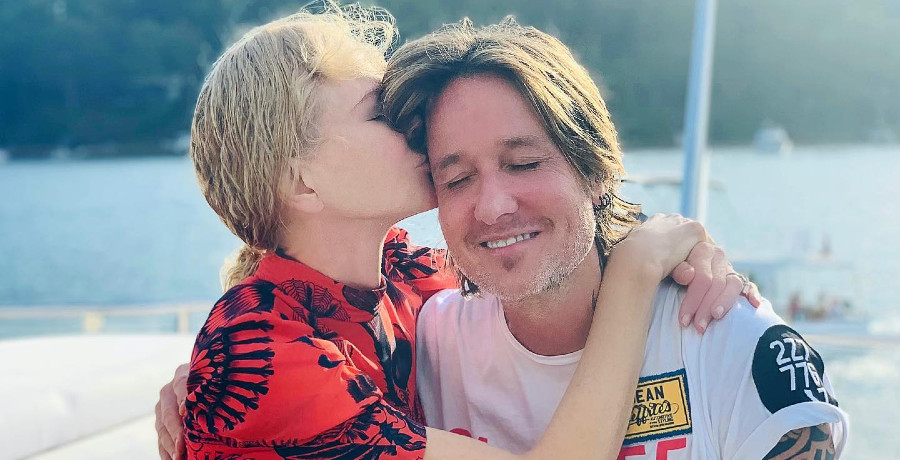 It comes as no surprise to anyone that Golden Globe winner, Nicole Kidman, and the most stellar shredder in country music, Keith Urban, are mad for each other, and never mind telling the world about their ever-deepening connection.

Naturally, Gayle King saved most of her questions for the Oscar-winning Nicole Kidman to discuss her nearly incredulous transformation into both the character of Lucy Ricardo and the immaculate artist and performer, Lucille Ball in Being the Ricardos, for CBS Mornings, as People confirms.

In her time, the comedic marvel wielded more power than any woman in entertainment, serving as an innovator, studio boss, and leading star of the show that was literally on every television set in the country. Of course, Nicole Kidman knew she had gigantic shoes to fill or to take off altogether. As always, in work, life, and love, the screen superstar stays a team player.

For Nicole Kidman, it’s about the team, not trolls on the Internet

While encompassing three sides of one of the most dynamic characters ever on the small screen, Nicole Kidman kept the singular focus on her craft.  The acclaimed star of The Hours keeps away from the gossip regarding any project.  She verifies that “I’m not one of those on the Internet… Seekng what people are saying.”

Instead, Kidman felt honored to be part of “such a fantastic company of actors,” and have the full confidence of Aaron Sorkin, who spearheads the production as writer and producer. ” I try to block it all out, and not let the team down,” the working wife and mom asserts.

In fact, earlier this month, Nicole Kidman gushed in praise for Keith Urban and their daughters, Sunday Rose, 13, and Faith Margaret, 11. She credits her family for her career success.  At home, like on the film set, the work takes a team effort.

For any actor, the commitment to complete a film is considerable.  Clearly, Nicole Kidman is dedicated to her craft and highly recognized for it in light of her second Golden Globe award.

“They share everything, everyone, because it’s our job,” the Australian American star reiterates of her family. “Without their support,” Kidman continues, “I would not be able to do it.” Above and beyond screen demands, the devoted mother serves as UN ambassador for women’s issues. She never shies away from showing her daughters her varied roles.

“They have both seen a lot and been aware of many of my goals,” mama Kidman describes of her daughters, relating that “We have a very, deep, intimate family.”

Certainly, fans know for sure that Keith Urban has no trouble fulfilling his part in the couple’s intimacy.  Country Music Alley frequently features the favorite country music ambassadors for passion over 50, including the sensuous, celebratory lick Keith slathered on the luscious neck of his stunning bride on their 15th anniversary. The captured pose came from a while back, but Nicole Kidman chose to share it for the occasion, as she explains during the CBS interview. “What does that say about me?,” the subject playfully questions.  On the other hand, Keith Urban selected a tender moment of the pair in their pajamas to post to the world.

Assuredly, neither Nicole Kidman nor Keith Urban, are no believers in all work and no play. Some leading ladies are daunted by challenging scenes involving real icons. However, the scene Kidman most fondly recalls is the famous barefoot grape-squishing adventure with Lucy and Ethel.  Not only does she embrace the full sensory joy of the scene, but also, she does Lucille Ball one better.  Remarkably, Nicole Kidman takes a swim in the fruit-filled vat. It’s the only portion of the film that its star wishes had more time.  No worries, fans likely await Nicole’s wish in their own Director’s Cut version.

Speaking of enduring stories, this red carpet couple lives out a real-life love story that fans never tire of telling or hearing. No admirer ever needs to worry that Nicole Kidman will run out of compliments for her mega-talented husband.

In a firm declaration, the wife offers the ultimate praise. “That man is the best thing that’s ever happened to me.” With Nicole Kidman style, she adds a sultry flair to “That man.” Keith Urban surely knows those two words well.

The waiting works out well

Showing seasoned wisdom as a soulmate, Kidman also feels fortunate that “I met him later in life..” Coincidentally, Keith Urban, also reflects that attaining sobriety and meeting and marrying “Nic” are the high points of his life.

Faithful fans always have new music to look forward to from the “Wild Hearts” artist, but perhaps not in the form of albums. In conjunction with the release of the buoyant ballad, Keith spoke of the freedom of his work with Breland and being able to simply release good songs. Rumors are still around that Keith Urban is likely one of the performers to take dates in Las Vegas originally slotted for Adele.

No matter what keeps your favorite country music stars busy, Country Music Alley keeps you posted on all the details!

Blake Shelton Headlines 2 Major Events, See What
Jimmie Allen Puts The APB Out On ‘On My Way’ With Jennifer Lopez
Miranda Lambert Voted One Of Most Influential People 2022
Maren Morris’ Tour Bus Is Far From Humble
Kelly Clarkson Listens To Fans & Delivers — Here’s How