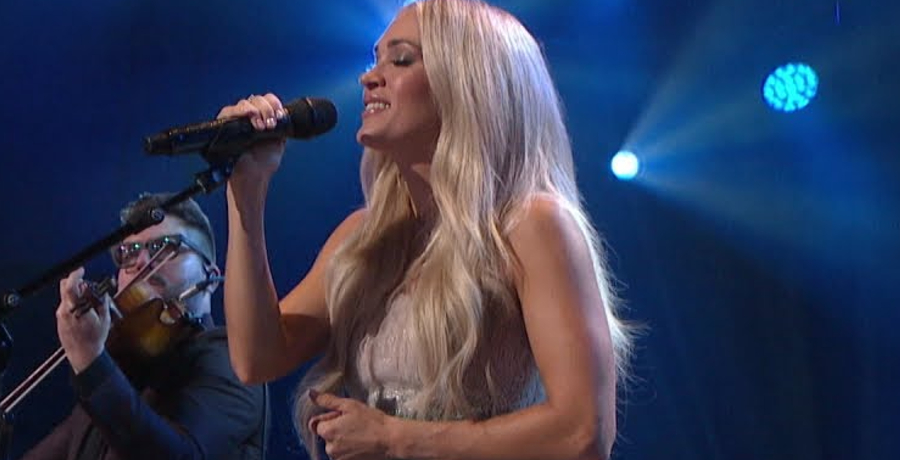 Carrie Underwood had her goddess moment at the Grande Ole Opry. The country singer posted stunning photos of herself performing on stage in Nashville. On Sunday, April 17, Carrie took to Instagram to share a carousel of photos from her special performance. She had quite the weekend to remember just a year after she released her first-ever gospel album, My Savior.

Carrie returned to the Grand Ole Opry stage on Saturday night. She looked breathtaking and ethereal in the white flowing gown she wore. The look featured a plunging neckline, voluminous sleeves, and a long flowing skirt. Check out the photos for yourself and learn more.

Carrie Underwood shared the photos of herself performing on the stage. She looked like she was in every bit of her element. Carrie sang her heart out on the Grand Ole Opry stage. Meanwhile, her backup band performed behind her.

“I love gettin’ all gussied up on a Saturday night to go play at the @opry!” Carrie Underwood captioned the post. “I am forever honored to be a part of this family!”

Fans flocked to the comment section to comment on Carrie’s striking look. One fan wrote, “Goddess moment! ALL my LOVE , CARRIE ! ❤️❤️❤️” A second one commented, “That dress is STUNNING,” while a third said, “A beautiful performance, and you looked incredible.”

A fourth fan said: “This dress.❤️❤️❤️❤️❤️❤️” Check out the beautiful photos for yourself here. This comes after Carrie Underwood headlined her residency in Las Vegas called Reflection. She will be returning to Sin City later this month.

It’s been an exciting time to be a Carrie Underwood fan. She won awards at the 2022 CMT Music Awards last week. Just a week prior, she won a Grammy award for Best Roots Gospel Album. She also unveiled the album cover and tracklist for her new album, Denim & Rhinestones.

“Hallelujah” singer is known for her incredible style

Carrie Underwood’s style has gotten better with time as well. The singer is known for her incredible sense of style. Reflections is Carrie’s first residency. She performs her greatest hits from the past 15 years. She also shows off a lot of stunning looks as she embraces her inner showgirl.

“It’s such a special honor to be the first artist to perform on this incredible stage in a brand new, beautiful, state-of-the-art theatre at such an exciting new destination as Resorts World Las Vegas,” Carrie Underwood said in a statement. “I’m so proud of this show and so happy to finally get to share it with the amazing audiences here in Las Vegas.”

Kelly Clarkson Listens To Fans & Delivers — Here’s How
Blake Shelton Headlines 2 Major Events, See What
Maren Morris’ Tour Bus Is Far From Humble
Jimmie Allen Puts The APB Out On ‘On My Way’ With Jennifer Lopez
Miranda Lambert Voted One Of Most Influential People 2022