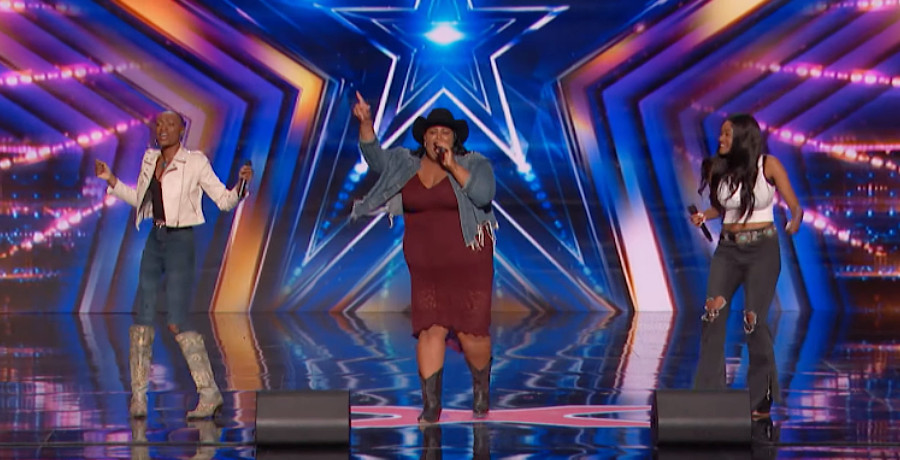 Only adding to the hoopla and hype following the audition and only the second unanimous golden buzzer granted by the AGT panel in history, other country stars lined up to sing praises for Chapel Hart, who understand what it is to “not look like country music” to some unwelcoming eyes. Darius Rucker broke news that the ladies are set to sing on his forthcoming album, and country queen Loretta Lynn wants the group to give one of her songs the same treatment as “You Can Have Him Jolene.”

Certainly, to say that doors are breaking down for Chapel Hart is an understatement. In comparison to their past efforts, the talented family trio is surfing a tidal wave of success. This performance was different, and even Simon Cowell transformed his demeanor.

“You Can Have Him Jolene” resonates with honor to its namesake’s composer and a needed retort and revision to the ageless “other woman” tale.  Surely, countless women ponder words they would put to the man-stealing subject. Still, it’s the wayward man’s decision to go. Let’s not let him off the hook. Chapel Hart gives no reprieve.

In the blinding light of the barrel lights from the scaffolding of Drake Milligan’s stage last week, however, for “Kiss Goodbye All Night,” the impetus fell to Chapel Hart to prove they could party even harder than the boys. The scorching, sharp performance of “The Girls Are Back In Town,” the title track from their independently-released 2021 album, literally put anything the boys served up under the table.

From Danica Hart’s first wailing exclamation in the ode to vanquish “one h*ll of a work week,” the sass, shimmer, and spirit of the three in silver and black leather is irresistible. Likewise, every step of their choreography brings the audience more into their aura.

Generally, acerbic rather than sweet is a descriptive term for AGT’s Simon Cowell. However, the sometimes hypercritical British judge maintains high praise for both country music frontrunners in the competition for Season 17.

Cowell credited Drake Milligan for not cutting and running after “Kiss Goodbye All Night” followed suit with “Sounds Like Something I’d Do” in shooting to number one on iTunes charts. Beyond “best of the night” honors, Cowell offers “my absolute respect” to Milligan for staying in the competition full throttle. Nonetheless, the off-and-running artist has his debut album, Dallas/Fort Worth, ready for its September 15 release.

Without a doubt,  Simon Cowell respects the struggle and the spirit within Chapel Hart, too. After calling out the group’s songwriting as “brilliant,” the British judge declares that “Things are going to go very well for Chapel Hart!,” adding that the trio “lit up the room.” In rare form, Simon Cowell continues to gush over his “really, really, really” good feeling over what’s going to happen to Chapel Hart. The smile and under joy on his scruffy face is more than obvious. Heidi Klum offers the first flat-out prediction for the trio in the finals, with Sofia Vergara concurring that “it’s going to be a really good night for you.” Howie Mandel praised that he didn’t see a talent show– he saw a headline show.

After the tally numbers came in Wednesday, Chapel Hart edged out the inspirational members of The Pack Drumline and determined daughter singer, Maddie, to be one of the only two contenders in the finals. The odds this season are tough, but so are these girls. Today, the New Orleans-based artists feel no longer burdened by self-doubt. Instead, the hopefuls savor the acceptance and elation of new fans over the rejection from label executives.

Obviously, Chapel Hart already wants to elevate female artists in country music who do not get the respect nor the radio airplay that comes automatically to their male counterparts. America and the world now recognizes the trio’s fervent passion for Dolly Parton, but their latest performance paid its due to two other grand dames of the country stage– both better known for wearing jeans.

In total appreciation, Tanya Tucker expresses wholehearted support for Chapel Hart, offering that “wow, you were fantastic,” in her social media post from the set of her Christmas movie, already in production. It’s no slight at all to be called out with a line like “dancin’ in the bar all night long to another Tanya Tucker song.” In turn, and gracious as ever, Tanya raves that “you’ve got a great vibe– it’s so different,” to the Chapel Hart crew.

Naturally, Chapel Hart responds in equal awe and appreciation that “The Original Bad Girl of Country” takes time out to notice the performance.

Of course, the power rests now with the voting viewers to see if a country showdown truly happens. For sure, life is flowing in an all-new and much more refreshing direction for Chapel Hart.

Country Music Alley keeps country music fans in the loop with the latest news and happenings in the country music world– check back often!