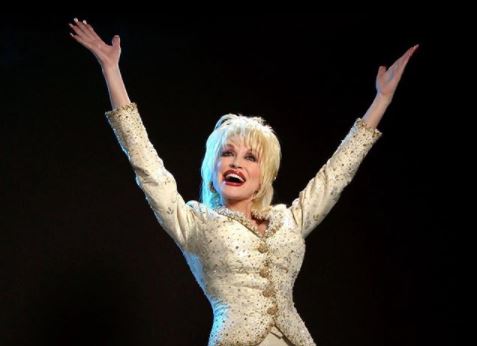 Country music queen Dolly Parton says “Never mind…” If trick-or-treaters haven’t made it to your socially-distant driveway to help themselves to Halloween treats.  As far as the timeless music legend is concerned, Christmas time has come early!

Her latest Christmas collection, “A Holly Dolly Christmas,” released on Friday, October 2.   It’s Dolly Parton’s first new Christmas album in 30 years, and she’s celebrating the occasion with some of her favorite singing partners.  Her multitalented goddaughter, Miley Cyrus, was singing Christmas carols from her kitchen to be in shape for her contribution.  Willie Nelson and Michael Buble join in the festive fun, too. Miley’s dad, Billy Ray Cyrus, is among the gifted guest artists, too.

As many times as Dolly Parton has graced “The Tonight Show” with Jimmy Fallon as a guest, the two stars have never had the opportunity to sing together, until now.  Their first tune together is delightful fun and the first-timers are following in big footsteps.  If it’s Christmas, it’s gotta be big, so Mariah Carey’s “All I Want for Christmas Is You” is perfect, as People reports.

There’s nothing like some cozy banter between the singing partners to get a Christmas party going.  Dolly Parton and Jimmy Fallon have that department covered.  “I don’t know how to say this without sounding all mushy and romantic,” Dolly opens.  Jimmy confesses that “I kinda like mushy and romantic,” before they both utter sweet “Whoo-hoo’s” at each other. “I love you, Dolly, always have, always will..” admits the late-night host, before Dolly launches into the song.

Jimmy Fallon is famous for imitating nearly every imaginable music icon.  His ability to make himself sound like his musical heroes is uncanny, especially when the host does Neil Young with the real rocker Neil Young beside him.  He and his band, The Roots, have sung with countless musical stars, including Mariah Carey last Christmas.  They celebrated the milestone of “All I Want for Christmas Is You” topping the charts, 25 years after the song was originally recorded in October of 1994.  Fans and critics immediately embraced the song as one to be included in the holiday canon.  Many folks can’t start their Christmas season without the tune being on repeat.

Dolly is always ready for Christmas

Dolly Parton certainly understands that kind of longevity.  Her 1986 Christmas TV treasure, A Smoky Mountain Christmas, is a holiday mainstay.  The VHS version, for those who have the aged ability to enjoy it, still fetches a pretty penny. The Christmas lights were hung in Dollywood in mid-August, preparation for the theme park’s “Smoky Mountain Christmas” musical, which usually runs from mid-November through the New Year.

Fans can look forward to a new Netflix production from Dolly Parton this Christmas, Christmas on the Square, featuring 14 new songs by Dolly in the TV musical.  Mariah Carey releases “The Rarities” this week, adding to her musical catalog, and making the perfect gift on any Mariah fan’s wish list.

Mariah Carey and Dolly Parton have more than music in common

Music is a unifying force across all languages, ethnicities, and lands.  Songwriting and the ability to express deep emotions, memories, and pain through music is a bond that Dolly Parton and Mariah Carey share.

Dolly Parton often shares the stories of her rustic Tennessee upbringing, with little means but a wealth of love, as she beautifully puts in poetry with “Coat of Many Colors” and many other songs.  Parton was a long way from Mariah Carey’s New York roots and had decades of success before eight-octave Mariah was even born.  Still, the two women who have molded their own empires know what it takes to get by on next to nothing.

Mariah Carey shared during an interview with Gayle King last week on “CBS This Morning” that “we had no money—nothing,” during her younger years with her mother.  She has been more candid than ever about her life in her new memoir, “The Meaning of Mariah.” Dolly Parton has been a role model for women in the music industry and in business.  Mariah Carey took notes, because she, too, has ventures in design, cosmetics, fragrance, and other outlets beyond music as a 50-year-old.

Without a doubt, jolly old St. Nicholas is already taking notes and checking his lists twice with Christmas only weeks away. Dolly Parton doesn’t need to worry over whether she is a good girl this year, or any other year.  She is an example in the entertainment business of courtesy and respect to everyone she encounters, from janitors to CEOs.

When the virus outbreak surged across the world, Dolly Parton didn’t sit by idly.  She cited that “we’ve got more money than we’ve got time right now.”  She proved her commitment to curing and treating COVID-19 with her million-dollar gift to Vanderbilt University in early spring.  Her generous donation was in support of the “Build a Bridge to Save Lives” initiative until a proven and workable vaccine is available to everyone.

Dolly Parton has given millions of dollars for countless worthy causes over her six-decade career.  She has given millions of books to young children through her Imagination Library, too.  For many children, she is merely beloved as “The Book Lady,” before any knowledge of her status as royalty in country music.

The test of decency for any person is what they do on a daily basis to make someone’s life a little better.  Dolly Parton doesn’t just look for the “God-light” in everyone.  She is the person who makes others feel loved and remembered, from hotel employees to her many stellar collaborators over the years.  She probably sleeps really well at night.  What better gift is there in life?