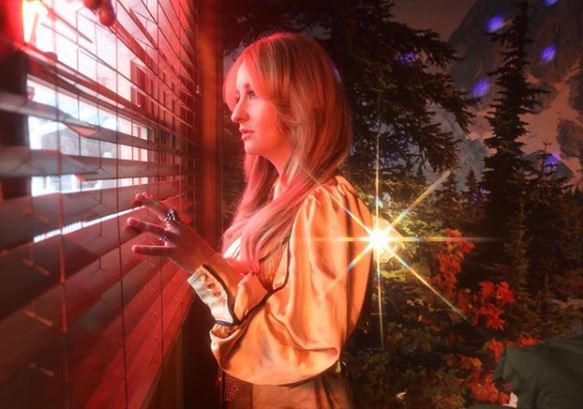 It’s no secret to Margo Price that the global pandemic has changed her life as an artist, a conscientious woman, a mother, a wife, and a performer beyond all she could imagine. Like countless numbers of her contemporaries, based in Nashville and around the globe, the singer-songwriter never imagined herself creating music videos at home.

At the moment, her latest album, “That’s How Rumors Get Started,” is comfortably perched at #5 on Amazon’s Alternative Country and Americana charts.  Under current conditions, that status alone is a substantial feet for Margo Price, but the 37-year-old Illinois-born songstress has never been satisfied with just the typical hallmarks of success.  She has always spoken her truth with unflinching candor and stood for causes that matter to her.

Margo Price is still finding ways to sing out and speak out in her own style, even through these quarantined times, as she shared in an October 5, very reflective interview with Relix.  The battle with COViD-19 was very personal for the singer and her family, but she’s standing strong and singing and writing some of her best music ever, thanks to a collaboration with an old friend.

“When you’re a woman playing country music, no one wants to hear your opinion,” contends Margo Price. They just want you to stand there, look pretty, and smile.”  Those sentiments are comparable to some made by Maren Morris in reference to her “classic protest song,” “Better Than We Found It.”  The 2020 ACM Female Artist of the Year admitted that there will always be those who say “Shut up and sing” rather than respecting a female artist’s perspective.  Fortunately, with a measure of success and star stature, the naysayers’ words become “like water off a duck’s back.”

Margo Price built her acclaimed country music resume with songs that definitely stood for something.  She broached the subject of sexism in the Nashville establishment from her first record.  “I spoke out about Trump when nobody else was doing it,” Price exemplifies. “I’m continued to talk about gun control and abortion rights– I’ve p@ssed off a lot of my fans.”

At the same time, the Grammy-nominated Price has garnered great support for her courageous stances.  One Nashville Scene critic praised Margo Price in a review of “That’s How Rumors Get Started,” assuring “Price has shown zero signs that success has changed her internal compass.”

John Prine was another country and Americana music giant who wrote music that stood for something and stood the test of time.  Tragically, the troubadour’s life was one of the earliest taken by the coronavirus in early spring.  Just as he and his wife, Fiona Whelan Prine, returned from an Irish music festival, she was diagnosed with the virus.  On the day she was released from quarantine, John began to show symptoms, and his symptoms became severe quickly.  He passed in April, and his loss left a giant void in the heart of Margo Price.

Price has joined her message and voice with the One Day Voting Rights collaboration, the Black Lives Matter movement, and calling out the misdeeds of the Grand Ole Opry in its complicated past.

excited to play my fifth year at @farmaid with this incredible line up. watch online this year and help support family farmers at a time when they need it most 🌱

Margo Price is a passionate fixture at Farm Aid through the last five years, as she posted on social media last month.  Fans know sincerity when they feel it, and Margo spends almost as many hours onstage at the benefit as Willie, Micah, or Lukas Nelson, but nobody tops Neil Young, John Prine likely gives added push and inspiration to Price’s surge for good causes.

Sturgill Simpson is also another good friend of Margo Price, but he had to prove his commitment to producing her third album.

Grammy-winning Americana wonder Sturgill Simpson also struggled with a coronavirus diagnosis in the spring, but he wasn’t looking to commiserate with Margo Price.  The artist who took his 2017 Grammy for “A Sailor’s Guide to Earth” as Best Country Album had been pursuing Margo Price for creative collaboration.

Simpson and Price have been good pals for a long while.  Simpson even approached Margo about producing her second album, “All-American Made,” which many critics laud as “the best album of the decade. When he came to her third album, Margo Price was leaning toward a more rock-oriented sound and a fusion of the Nashville and LA studios that gave the tracks flavor.

Sometimes even the best of friends have major clashes.  “I’m very opinionated,” says Price, unsurprisingly.  She insists that “Sturgill can be very loud with what he thinks,” but the fact that he “just kept persisting” won Margo over.  “He’s going to do a good job because he’s motivated,” concluded the outspoken singer, and the reception speaks for itself.

Creative and healing are words for Margo Price and family

The greatest hurdle and heartbreak facing Margo Price through her personal period of the pandemic was her husband’s battle with the virus.  The symptoms came on hard and fast for guitarist Jeremy Ivey, who is also a co-writer with his wife.

He was extremely weak for two months, hardly able to lift his head and very frail.  “It was really scary” Margo Price concedes.  For the first 3 1/2 months, she focused on all she could do to meet her husband’s needs and still protect their three children.  Just as frightening was the fact that Jeremy had two “indeterminate” tests, despite the rampant symptoms, just like John Prine had received.

Like many moms, this country star fell into a daily routine of waking up, making breakfast, playtime, nap, clean up, and do again.  In the last month and a half “I have been able to pick up a guitar,” with her mom able to do some nannying.  She is grateful that “we have our health” and grateful for her husband’s truthful input.

Having friends like the Grateful Dead’s Bob Weir doesn’t hurt, either.  The two text each other and talk about Weir’s album project with John Prine.

For Margo Price, the small world and the bigger world that has been brought into focus during the pandemic is a blessing worthy of song.

Miranda Lambert Voted One Of Most Influential People 2022
Gwen Stefani’s Favorite Looks Will Live In Your Head Rent-Free
Carrie Underwood Hearkens Back To Signature Style On New Tune
Keith Urban Relies On Marital Devotion For Sobriety?
Kelly Clarkson Threaten To Boycott ‘The Voice’ Amid News