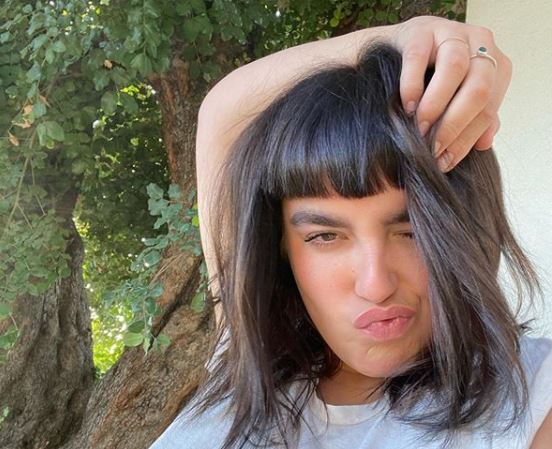 Like any dad, Tim McGraw knows that once the kids are grown, even his own gorgeous three daughters with Faith Hill, they make their own choices.  Hairstyles take a high-priority on most ladies lists, and Gracie McGraw, now 23, is not afraid to make bold statements in style.  The eldest sister has the same family legacy of beauty and talent as her siblings.  She and her sisters also have the unfailing love of Tim McGraw and Faith Hill no matter what life brings.

Hollywood Life showed off the latest daring look from Gracie McGraw, trading in her flaxen tendrils for a dark and dramatic hair shade.  It’s a sure bet that Tim McGraw and Faith Hill feel fine with whatever direction their oldest daughter chooses when it comes to fashion and style.  They trust her instincts, and they know her heart.  Gracie McGraw knows that everybody needs to feel good about themselves through this worrisome holiday season with the virus cases surging like never before.  She’s doing her part to shine her own one-of-a-kind light through the darkness– even when she has dark hair!

“Who is she?!!!!” Gracie McGraw captioned her photo, debuting her dark coiffe.  The natural light of the outdoor setting gave a perfect sheen to her new style.  She playfully makes a pucker-face with her pink-glossed lips.  The daughter casually lays her arm on top of her head to highlight her trimmed bangs.  The brunette style brings more focus to her luscious, thick eyebrows.  A free and easy sleeveless T-shirt topped off the look.  No matter how she embodies the perfect cover girl, Tim McGraw and Faith Hill know the positive and generous spirit within their daughter outshines any quality on the outside.

Big sister Gracie is already getting rave reviews from 18-year-old Audrey McGraw.  The younger sister expressed herself in all capital letters with “WOW WOW WOW” and a final affirmative “YES” to make herself absolutely clear.  Hair colorist to the stars, including Kristin Cavallari, Justin Anderson, weighed in with “I love it” and Emma Roberts also echoed approval.  For her part, Gracie offered full credit to Kim Navarro of West Hollywood’s 901 Salon. Still, it takes a girl with spirit to sell a new style and let it speak her truth.  Tim McGraw and Faith Hill can take pride in being parents to three girls who understand authenticity.

Back in August, the stunningly beautiful (at 53!) Faith Hill delighted in going pink with Gracie.  The firstborn daughter wrote that “Best Ma’am and I are quarantined summer girls. She’s hot,” to accompany a photo of herself with light, pink-tipped hair.  In a flash, there was Faith Hill showing off a beautiful pink side braid on the family’s sun-struck back porch.  Tim McGraw only had a few words, but that was all it took to show his complete approval.

“Dang, I love this girl!” Tim McGraw raved over the photo taken by Gracie of his wife.  Her grace and natural beauty, never needing a smidge of cosmetic enhancement, still overwhelmed him.  Fatherly love is an even more powerful force.

For Gracie McGraw’s 23rd birthday on May 3 this year, Tim McGraw unabashedly proclaimed his eldest daughter as having “The sweetest, kindest heart in the world… So beautiful inside and out.” He observed that Gracie is “always there for her friends. Always there for her family.”  The daughter’s gift of “such a big smile and boisterous laugh” also earned dad’s praise. “We love her so much,” his words close.

In September, Gracie still had a half and half blonde-brunette look, testing out darker bangs, which she proudly trimmed herself.  The New York University graduate had inner peace in mind over anything surface-level for her many followers.  She urged “Take some time for yourself today,” imploring her folks to “dance it out, cry it out, pose it out“  or any other preferred means to “give yourself some love.” It seems like Tim McGraw and Faith Hill have raised a lovely girl to be part psychologist, part influencer.

Yet another hit collection for Tim McGraw

Tim McGraw released his first all-new collection of music in five years with “Here On Earth” in August.  In a message coinciding with a social media look at a family “release party” during these pandemic times, Faith Hill proclaimed the effort “a masterpiece,” being justifiably proud of her husband of 24 years.  The songs struck an emotional chord between the saving grace of home, family, dogs, and everything held dear and the desperate need to somehow find an emotional getaway.

Tim McGraw can barely catch his breath in this time when all of country music is coping with being very different than a year ago.  The superstar was just recognized as the Tom Hanks Caregiver Champion for his work with veterans and veterans with brain injuries, specifically.  In December, the “I Called Mama” singer-songwriter will headline benefit performances for VetsAid.  McGraw has just launched an Apple music podcast, “Beyond Their Influence,” and he has another treat ready just in time for Christmas.

ET Canada reports that McGraw Machine drops November 20, with a focus on the chart-topping hits from Tim McGraw from 2013-2019.  Of course, the modern era captures megahits like “Humble and Kind” and the Keith Urban-Taylor Swift collaboration on “Highway Don’t Care.” Florida Georgia Line team up with him for “May We All,” which is also included.  The Bellamy Brothers have given their wholehearted support for the Tim McGraw rendition of their classic, ”Redneck Girl,” featuring Midland.

Whether in philanthropy, marriage, parenthood, or putting his art out into the world, Tim McGraw keeps paying the love forward.