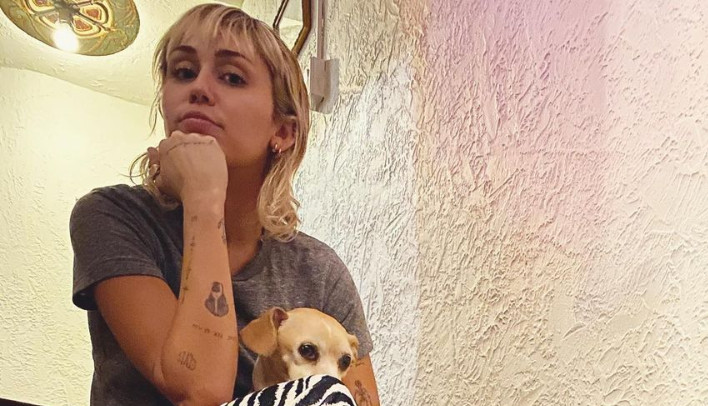 Miley Cyrus belongs to many worlds, both personally and musically.  Her years as Hannah Montana made her a global presence and garnered followers who are loyal to this day.  At the same time, being part of the Disney machine can become artistically unbearable.  Miley Cyrus has always been an open book with her mind and heart and this year has been a quiet one for the singer-songwriter-activist.

E News looked back on the year with Miley Cyrus, ahead of the release of her latest album, Plastic Hearts, on November 27.  Fans and critics are predicting Cyrus’ collaborative song with Dua Lipa, “Prisoner,” will break the Internet. But Miley has spent much of the past year working toward her mental, spiritual, and physical health.

Miley Cyrus has never forsaken her country music lineage.  She still rips into “Jolene” in concert, taking on the famous verses better than anyone next to her godmother, Dolly Parton, who wrote them.  Miley and Dolly are making Christmas magic in song on “Christmas Is,” the heartfelt Parton original done as a duet on A Holly Dolly Christmas.  The ballad is arguably the most genuine ode to true Christmas spirit ever captured.

One of the singing gigs Miley Cyrus made sure she fulfilled was the Christmas album gem for her beloved godmother.  Dolly Parton fans like the real product over digital, so the faithful goddaughter was singing Christmas carols from her kitchen through June and July.  Miley’s dad, Billy Ray Cyrus, also loved his duet with Dolly, called “Christmas Where We Are.”   The song was specifically written to remind listeners to keep the love while keeping their distance during this unique pandemic holiday.

Dolly Parton has another very famous Yuletide classic, “Hard Candy Christmas.”  Miley Cyrus might just be taking comfort from her godmother’s lines in that one over some eggnog this season.  Around this time last year, Miley was under strict orders to be silent after treatment for tonsillitis revealed significant vocal cord damage.  She used the reflective time to muster inner strength, and she would need it in spades.

Actor Liam Hemsworth and Miley Cyrus seemed to have found the lasting kismet to their blazing but testy romance in the process of making Cyrus’ Younger Now album. With the song “Malibu” exuding all the contentment of rediscovered love.  Miley recounted on The Tonight Show how heroically Hemsworth had saved her precious pigs and the other livestock from the November 2018 wildfires.

The trauma didn’t turn to closeness

Hemsworth reflected that “just going through something emotional, it brings you closer.” Only days before Christmas, Miley Cyrus and Liam Hemsworth wed in an intimate family ceremony at the Cyrus family compound in rural Tennessee.  The bliss soon hit some roadblocks, because by August of 2019, Liam had filed for divorce, supposedly sparked by an affectionate getaway vacation between Miley and Kaitlynn Carter.

Miley Cyrus and Liam Hemsworth came to an amicable settlement in December 2019, and the judge signed off at the start of 2020.  For a time, Miley found comfort reconnecting with her old friend, Cody Simpson, and the two were a support system to one another in sobriety.  They were also big on community support, delivering food to front-line workers.  The outspoken Cyrus took control of her own narrative on the day that “Midnight Sky” released in August, letting her fans knowing that she was single again.  People reports that Hemsworth just sold the fire-damaged Malibu home that he and Cyrus shared for over $3.5 million.  Miley Cyrus had a lot to pour into new music, but more loss still to come.

Miley Cyrus needed time to “sit with my thoughts” after the traumatizing experiences of the past two years.  As she gave her house a scouring treatment, partly in hopes of finding some of her recorded music salvageable from damaged computers, she turned to herself.  She gave up her pot habit, although revelations surfaced today of a brief “falling off the wagon” and being back on Sober Street for the past two weeks.  Her mom, Tish, voiced tremendous pride in the transition to Miley’s healthy lifestyle, declaring “she’s the cleanest person I know.  She’s just so solid.” Never mind that Miley said that it was her mom who smoked the last stash.  Working out and a watchful diet also work into the new Miley plan.

Three months ago, Miley Cyrus also suffered the loss of her grandmother, Loretta.  The songwriter started to reflect on her completed music in a different way.  She scrapped two upcoming EP projects, and look toward to an album that embraced the idea that “I want to make music for me.”  She credits Billy Idol for bringing her back to that kind of artistic joy on Plastic Hearts. Joan Jett is another guest on the album.

Forever is a big word

“I feel something, I experience it, I write it, I release it,” Miley Cyrus explains of her creative approach, adding that “by the time the record comes out, you’ve evolved past that experience.”

“Forever” is another word that Miley Cyrus wants to move past.  The prolific artist points out that even as little kids, the idea of “best friends forever,” “love you forever,” and more ties with eternal time are planted.  She insists that “we’re kind of set up for devastation” and “villainized” when forever doesn’t happen.

It’s easy to forget that today, November 23, Miley Cyrus turns 29 years old.  That’s very young to conceptualize forever and relationships of a lifetime.  In many ways, Miley has lived several lifetimes.  Some of them have not been by her own design.  As she noted herself in 2017, “I’ve got a lot more living to do.” Indeed she does, and Miley Cyrus is still figuring things out and evolving.  She’s also got a lot of things in common with her godmother, Dolly Parton, from another classic.  She’s no “Dumb Blonde.” The prolific performer prefers freedom to forever for now, and declares her latest chapter only “The Beginning.”