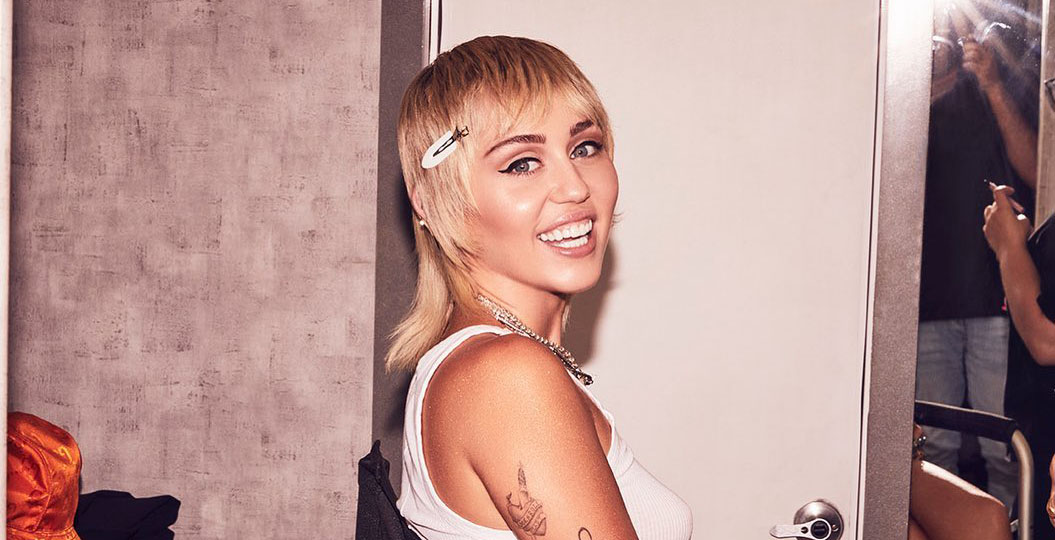 It’s the last weekend before Christmas, but Miley Cyrus already has her New Year’s Eve plans booked. The singer-songwriter is bound to be at her rockin’ best with songs from her harder-edged album, Plastic Hearts, released late last month.  Not to worry, the talented artist who grew up in Tennessee never forsakes her country roots, or that she is the beloved “little fairy goddaughter” of Dolly Parton.

Miley Cyrus is going home for Christmas in this pandemic year, as related in a People feature per MSN.  She also made headlines for teasing pals Shawn Mendes and Camila Cabello to share an intimate encounter with her after they covered her classic 2009 anthem, “The Climb.” The affirming ballad became the centerpiece of Hannah Montana: The Movie and a worldwide hit.  Miley Cyrus celebrated her 28th birthday just a few weeks ago. She is the first to say that she has a lot more living to do, and that includes much more music to create.  For now, it’s time to celebrate at home and ring in 2021 with one of America’s favorite New Year’s TV fixtures.

‘Midnight Sky’ Miley Cyrus will stay up way past midnight

Entertainment Tonight and Billboard broke the exciting news that Miley Cyrus is part of the roster of talents ringing in the New Year for Dick Clark’s New Year’s Rockin’ Eve with Ryan Seacrest.  Miley won’t be alone among the luminary movers and shakers taking the prestigious program’s stages in this socially- distanced year.

Jennifer Lopez is the headliner this year, and Super Bowl viewers attest that the vibration from her glute muscles alone generates enough heat to power the 5 1/2 hour broadcast.  Cyndi Lauper, Billy Porter, Ciara, and Lucy Hale will perform along with Miley Cyrus.  Her hit “Midnight Sky” will surely make the setlist. J Lo shakes things up just before the ball drops in Times Square.  Broadway’s Billy Porter was hosted last year from New Orleans, but this year, the versatile star and fashion icon will share duties with Seacrest. Porter will sing with Cyndi Lauper for a touching duet from their show (for which Lauper wrote the music), Kinky Boots.

Ryan Seacrest gushed that he couldn’t get Miley Cyrus “off my mind” in the official announcement from the broadcast.  The host counted down on Twitter, exclaiming that only “11 more days” remained until the big night.

Long before Miley Cyrus was born, Dick Clark’s New Year’s Rockin’ Eve premiered in 1972.  The broadcast became a standard for ABC and gave the 70s generation and beyond something livelier to celebrate than their grandparents’ remembrances of Guy Lombardo.

Can't get @MileyCyrus off my mind, off my mind because she's performing on #RockinEve! Don't miss it, December 31st at 8/7c on ABC. pic.twitter.com/QUX7fICT6K

Simple family and fun times mean the most to Miley Cyrus

For so many of us who remember and love songs like “The Climb” or more recent ballads like “Malibu”  or “Inspired,” seeing Miley Cyrus in black leather and fishnets with a slew of silver hardware may be a jolt.  If Miley is anything, however, she is a pure artist who believes in self-expression.  Her life has taken a difficult path in the last two years.  Love, divorce, a devastating fire, personal losses, and vocal cord surgery are just some of the known struggles that came in her life.  She has every right to artistically express pain. Pain is never pretty, but processing pain through art is cathartic and healing.  Miley Cyrus is also a performance artist who understands her history, her followers, and visual images.  She has every right to engage her talents.

It’s not surprising that Miley Cyrus is looking forward to a little down-time in Tennessee.  Her recollections of “coming home with muddy feet” as a child after a day of playing with her dad, Billy Ray Cyrus, in the creek are already cast in song.  When the singer called into Good Morning Football, Miley Cyrus quickly mentioned that “my favorite thing to do when I go home” is tossing a football around with her dad. “Some of my greatest memories are playing football with my dad,” she reiterated.

Beyond their family kinship, Miley Cyrus shares a camaraderie with her father as an artist.  “We think of ourselves as athletes,” she further reflects, because of the “dedication and training” required of performers.  Cyrus feels “thankful” for the athletic mindset and has recently adopted a very health-conscious lifestyle with just a few hiccups.

Miley Cyrus didn’t mind at all when photos and videos of her as a cheerleader popped up on the broadcast.  “I was a cheerleader from the time I could basically walk,” she relates. In a sense, Miley is very honored because both her mother and grandmother were cheerleaders as well. Soon, the “Prisoner” singer will be cheering on little sister, Noah, at the Grammys.

"Some of my greatest memories are playing football with my dad."@MileyCyrus. @MJAcostaTV. Tomorrow morning on @GMFB! 🔥 @NFL pic.twitter.com/q2mUYrhK0j

“I have to go home for Christmas and if I don’t say the Titans, it will be a huge issue,” Miley Cyrus admits flatly.  While Miley adores her family and time on the farm, she reveals last fall that not every experience with her dad is so idyllic.

She told the story of being “in a baby backpack” on a dirt bike with her father when they came to a falling tree. “He ducked and I didn’t,” Miley Cyrus reflects. “It was bad,” she describes of the injury.  She adds that “everyone’s asked me that for years,” joking that “that’s what’s wrong.”

Miley teased that dad Billy Ray earns both a “worst dad” and “the best dad” honors.  His realistic preparation has been priceless to his daughter.  “He sets you up for failure and disappointment,” confirms Miley Cyrus. “But I like that about him because he made me tough.”

Miley Cyrus doesn’t leave out her devotion and gratitude toward her mother, Tish. The song “Mother’s Daughter” is a loving tribute.  The video for the song features a touching cameo of Miley resting her head on her mother’s shoulder.

“My mama always told me that I’d make it, so I made it” echoes one lyric.  Now, Miley Cyrus is making her way home to Tennessee for a restful, football-filled country Christmas.