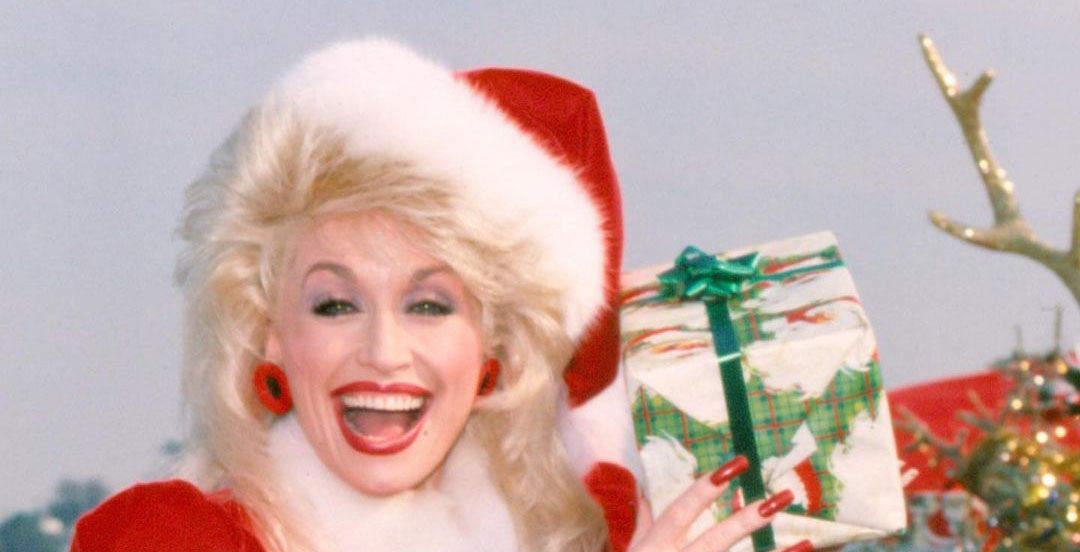 Dolly Parton is undeniably the greatest and most prolific songwriter alive.  Whether it’s a timeless country music classic, one of her many pop-crossover favorites, or movie themes no one can forget, the living legend has written everything.

Dolly Parton has truly done it all this Christmas season.  On October 2, Dolly got the jump on every musical artist before any of them even took tinsel out of the decorating box.  She released her first all-new Christmas collection, A Holly Dolly Christmas, in 30 years.  She also wrote the songs for Christmas on the Square, her Netflix TV musical.

Faithful fans always count on Dolly Parton to come straight from the heart and keep things fun.  She does both in abundance, with touching songs with family, such as “Christmas Is” with her goddaughter, Miley Cyrus, and “Christmas Where We Are” with Miley’s dad, Billy Ray Cyrus.  “You Are My Christmas” is also a tender duet with her brother, Randy Parton. The harmonies between the two are the kind that comes only from singing together since childhood.  Dolly had flirty fun with Jimmy Fallon and Michael Buble´ along the way. Willie Nelson teams up with Dolly on “Pretty Paper” and it’s more than pretty darn good.

Before she could write, Dolly Parton created songs that her mother would rush to capture in words. The songwriting wonder estimates that she’s written between 3500 to 4000 songs.  A new bunch was discovered this fall in a long-stored box in her home.  Still, her vast song collection doesn’t necessarily mean that coming up with every song is easy. Dolly Parton shared with BANG Showbiz per MSN and her UK interview with Music Week that her holiday collections for the screen and listening joy were very hard work.

Dolly Parton takes her personal mission to “be a light” very seriously.  She started shining love early in this unique pandemic season.  From her Tennessee basement, she spoke messages of resilience in “coming through this together” and how God would use the ordeal to help everyone see each other with “eyes of love.”

Last May, after making her donations totaling millions to Vanderbilt University Medical Center to fight the virus, Dolly Parton released “When Life Is Good Again.”  The moving ballad urged that now is the time to “be a better friend” and follow through on all the “someday” promises we always make.  The pandemic brought home the piercing truth that all we have is this moment.  Parton was already spending considerable moments on creating Christmas songs.

“Every songwriter wants to write songs that can become Christmas classics,” Dolly Parton stresses.  Achieving that feat takes more than talent.  The legendary lady with the song verse admits that the pitfall to creating holiday classics is the thought that “everything you can write about Christmas has already been done.”

Even with the support of close family and friends, Dolly Parton had to find more determined attention than usual.   Her calling to “lift people’s spirits ” through these troubled times and “lift my own” by working with so many she calls “wonderful artists and friends of mine” made the right motivation.

The one-woman entertainment mogul is famous for doing business before the sun comes up, but creating Christmas songs takes surprisingly more effort from Dolly Parton.  “I really had to focus, more than I do when I just sit down to write whatever I feel, or if I’ve been commissioned to write a song for a movie or TV show,” Dolly confesses.

She hopes that this collection holds several songs that folks love and “play year-in and year-out.” Judging by how the album dominates the holiday album charts, it’s already a favorite for many. Dolly Parton yearns for a holiday album that’s “something to stand the test of time,” and she’s already stamped that mark.  The ageless 74-year-old followed up the album with a CBS television special by the same title on December 6.  Her stories of her childhood and personal faith only magnified each performance.

Her 2020 Christmas will look different than many others for Dolly Parton.  The oodles of nieces who want to play their fingernails just like Aunt Dolly will have to make tunes on computer screens.  Dolly’s generosity and the huge strides in science combine to make Christmas 2021 brighter.

Only last week, Dolly Parton celebrated her Imagination Library with a special commemoration on Facebook.  The literacy initiative has delivered books into the hands and homes of children across the globe, surpassing 150 million books that truly belong to children, fostering lifelong readers.  “The Book Lady” extends her mother’s heart and passion for learning to every child touched by the mission.  Millions of preschool Dolly Parton children-of-heart feel like it’s Christmas every time a book arrives.

Miley Cyrus is reveling in her rock ‘n roll side on her Plastic Hearts album, but she never forgets her Tennessee upbringing and tradition, or her godmother, Dolly.  Parton calls Miley “my little fairy goddaughter,” as only godmother Dolly Parton can do.  “I honestly think of Miley, Billy, and the Cyrus’ as family,” Dolly declares.  The feelings are mutual.  Parton longed to have duets with Miley and her dad because “I figured I probably won’t do another Christmas album,” says the songwriter.  Only Dolly can put “thermal underwear” in a song so perfectly, so only time will tell.

No diehard Dolly Parton fan will ever hold you to that prediction, Dolly.  Listeners are ready and waiting for any glimmer of love and light from you, whether it’s Christmas or not.