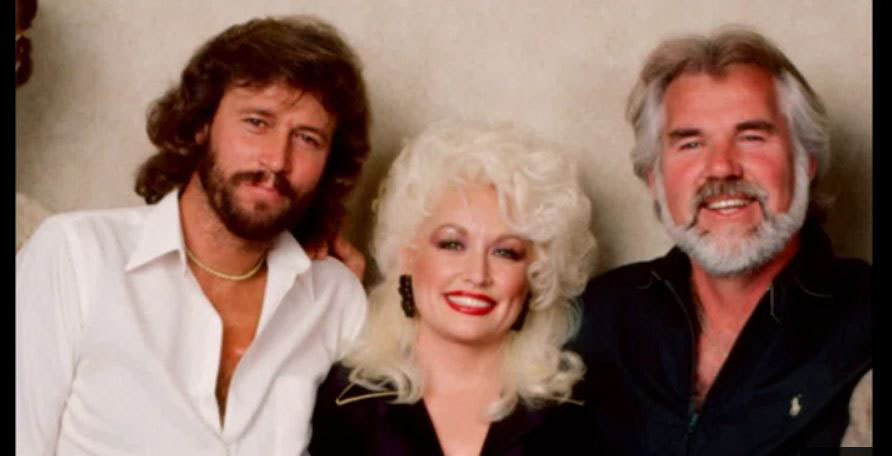 It’s not enough that supreme songwriter and country music legend Dolly Parton decorated the 2020 Christmas holidays with songs, spirit, and meaning that only she exudes.  Dolly isn’t wasting one minute of the New Year without sharing some new music, made with an old and cherished friend, Barry Gibb.

Back in early November, Country Music Alley previewed Barry Gibb’s Greenfields: The Brothers Gibb Songbook Vol. 1 project.  For some, fans only know the founder and his brothers for dominating of the charts in the mid-70s.  Their infectious and omnipresent Saturday Night Fever soundtrack reigned solidly at #1 for 24 straight weeks.  Another contingent of fans certainly remembers classics like “How Can You Mend a Broken Heart,” “Massachusetts,” “New York Mining Disaster 1941,” “To Love Somebody,” and more unforgettable tunes long before the disco era.  Dolly Parton certainly remembers “Words.” She takes the song to deeper interpretations than ever before in her duet with Barry Gibb.

Taste of Country and CBS Sunday Morning delve into the collaboration of stellar artists from the country music world who took the Bee Gees’ song catalog for a spin. Dolly Parton never forgets a great song or an old friend.  She and Barry Gibb bonded ever since Kenny Rogers called up Barry Gibb and the 1983 duet, “Islands in the Stream” was born.   Dolly and Kenny toured the world for nearly 6 straight years on the strength of that song and their individual hits. Dolly writes words straight from her heart, about every person or memory she recalls.  Jason Isbell, another Grammy-winning singer-songwriter on the project, declares that Gibb has “a magical sense of melody.”  Words, melody, and penetrable emotion come through on this remarkable take on “Words.”

Nashville is lovingly dubbed “Music City” throughout the world. Barry Gibb knew he needed to come to Nashville to reopen the trove of Bee Gees songs to the world. He reached out to Dave Cobb, who produced some of the most recent, timeless treasures in music with Chris Stapleton, Jason Isbell, and Brandi Carlile. Dolly Parton mentioned Brandi Carlile among the elite group of female songwriters she admires today in her Billboard Hitmaker Award acceptance speech. Nashville is still a city where “real songs” come from, insists Gibb.

The Brothers Gibb sang in harmony almost from the second they were born.  They knew the roots songs of Americana by the time they could stand on stage, particularly Barry.   Rabid disco fans likely don’t know that Conway Twitty’s 1980 song, “Rest Your Love on Me” is a Barry Gibb composition. It was the 25th number one for the country crooner as a solo artist.  Dolly Parton wasn’t the intended singer for “Islands in the Stream”– it was meant for Diana Ross.  Dolly is the one who made it magic.

“Where I’m standing, right in this spot,” Dolly Parton reminded Barry Gibb at RCA’s Studio B, “is where I sang ‘I Will Always Love You’ and ‘Jolene’ on the same day.”

By the time “Words” came to the Bee Gees in 1968, Dolly Parton had already written numerous songs with Porter Wagoner and even written one that Kitty Wells recorded.  This 2021 rendition is worthy of the musical legacy of both the songwriters and the singer.

More in common than a song

Dolly Parton and Barry Gibb have more in common than their love for country music.  Both are 74 and still in their creative prime.  Dave Cobb noted that “not only are they legends, icons– Dolly has a theme park, Barry’s a knight (by order of the British Empire– the brothers were born in Britain and raised in Australia).  “It’s a lot to take in.” The accomplished singing partners share a kindred note in sadness, too.

Among her endless gifts, Dolly Parton has a perfect warble in her way of extending notes. Her first verse in “Words” makes everything in the listener’s world vanish apart from her voice.  The song stops being a ballad and becomes a heartfelt conversation between two desperate hearts in love.  It is a pointed, contrite plea for forgiveness. Gibb’s piano and harmonies layover Parton’s like butterflies—light and beautiful.

Barry Gibb and Dolly Parton have both suffered the loss of her brother.  In Gibb’s case, two inseparable siblings passed in tragic ways and at early ages.  Maurice Gibb passed suddenly from complications of surgery in 2003.  He was only 53.  Robin succumbed to liver cancer, colon cancer, and intestinal surgery in 2012, at 62.  Dolly Parton lost her brother, Larry, as a child.  He was supposed to be “her baby” to take care of in the family line of love and responsibility.  A sibling can never be replaced, but a song shared by dear friends is surely healing.

Barry Gibb spoke of feeling his departed brothers’ spirits during the sessions for Greenfields. He doesn’t care to see the HBOMax biopic released last month on the Bee Gees, subtitled How Can You Mend A Broken Heart. “I should probably never see it,” the surviving sibling says.  “I can’t handle seeing the loss of my family” he admits after the wrenching ordeal of experiencing it.  Dolly Parton understands and knows the divine healing in music.  Like Dolly, Gibb says he’s ready to return to touring “if people want me.” Parton reflected recently on her desire to record a classic 70s ballad by Dan Hill.

Keith Urban, Sheryl Crow, Miranda Lambert, Allison Krauss, Little Big Town, and more join in the lineup with Dolly Parton and Barry Gibb for the satisfying journey through Greenfields: The Brothers Gibb Songbook Vol. 1.  The collection releases January 8th on Capitol.  Are you excited to hear the album? Speak out in the comments section!

Jimmie Allen Puts The APB Out On ‘On My Way’ With Jennifer Lopez
Carrie Underwood Hearkens Back To Signature Style On New Tune
Keith Urban Relies On Marital Devotion For Sobriety?
Blake Shelton Headlines 2 Major Events, See What
Maren Morris’ Tour Bus Is Far From Humble