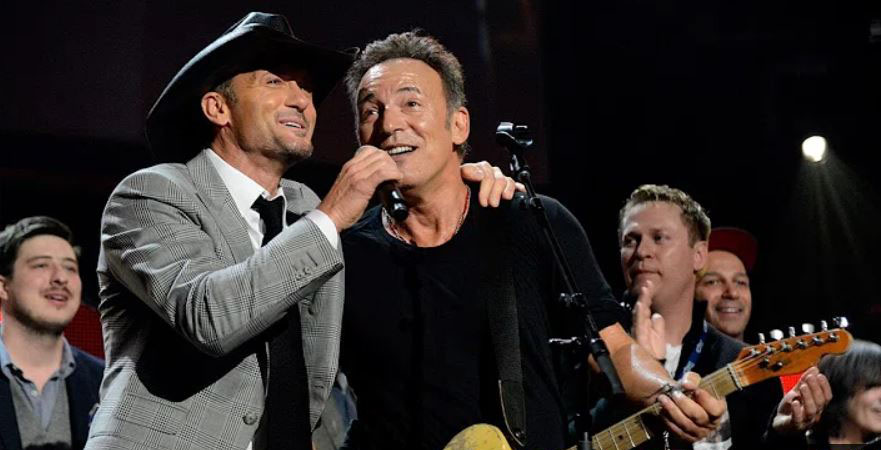 Few superstars in country music ever reach the levels of acclaim that Tim McGraw knows for more than 25 years now.  His familiar songs ring in the hearts and memories of fans for so many reasons.  The man famous for turning “Humble and Kind” into a movement has every glimmering piece of hardware that his industry can give.

All the accolades aside, Tim McGraw makes it clear that what matters most to him are the people in his life.  He and Faith Hill will celebrate 25 years together as husband and wife in 2021. Consequently, their rich history of hits in harmony together is also etched into country music lore.  Tim and Faith are tremendously proud and supportive parents to their three beautiful, strong, independent daughters.  Each one has gifts and a unique voice, including one set on Broadway and all with big hearts to share with the world.

Tim McGraw never forgets good friends, either.  One of those is Bruce Springsteen. During his visit with McGraw on his Apple Music show Beyond the Influence, People confirms, “The Boss” reflected on how the intricacies of life weave with the music in a band.  The “Born to Run” rock legend also surprises Tim McGraw with a memory that still means a lot to him.  Words at just the right time are more priceless than trophies.

Tim McGraw often includes a song about cowboys in the style of Western movie lore on his albums, such as “If I Was a Cowboy” from Here On Earth. The wishful imagery doesn’t mean that the star with the most famous black hat hides his emotions. The hitmaker has heartfelt words of “praying for our city” in the wake of the Christmas Day bombing in Nashville. Tim chokes up almost every time he speaks about any of his girls or Faith, and he admits that he still can’t hear “I Called Mama” without tears.

Bruce Springsteen describes the emotion filling his memory as he recalls 50 and 45 years together with his E Street Band.  It’s easy to know you’re a legend when the “newbies” playing with you have decades under their belts.  Tim McGraw knows what longevity means, too.  Most of his band members have been with the “Find Out Who Your Friends Are” singer for 30 years, but no less than 10 years.

At 71, Springsteen explains how rock ‘n roll “is the only business where you grow up together, you have problems, things happen, you get married, you have kids, you get divorced (insert chuckle from Tim McGraw), you have more kids– your whole life is together.” Country music isn’t that different, Bruce.  Band breakups are famous in every genre. The documentary and album, Letter to You, chronicles the journey of Bruce Springsteen and the band from a personal perspective.  From 1988-1998, the band didn’t play. Still, Springsteen takes great pride that the story of Letter to You “is about a band staying together, not breaking up.”

Bruce Springsteen still has a surprise for Tim McGraw about a very powerful reminder.  A few words can still carry power.

A timely reminder from Tim McGraw

Tim McGraw is unabashedly a fan of Letter to You. He calls the effort “one of my favorite albums” from Springsteen’s vast catalog.  The Country icon with his own cache of hits points to the “intensity” and “urgency of emotion” within the work that sets it apart.

One memory that certainly stands apart for Bruce Springsteen is from 2003 at the Grammys.  The rock veteran was shooting for Album of the Year for The Rising. Instead, Norah Jones took that prize for Come Away with Me. Springsteen took Best Rock Album, and Tim McGraw had the perfect words of comfort and consolation for his friend.

“I always remember one thing you said to me,” Springsteen related regarding the night in the Grammy dressing room.  The rocker recalls that the mood was “down in the mouth” until Tim McGraw reminded the New Jersey hero that “Hey, what’s the matter, man. You’re Bruce Springsteen!”

Springsteen confirms that the simple affirmation from a friend “took me up” and “was kind of a great moment”– one that surely lingers in his memory. Tim McGraw had the perfect return comment.

Reciprocating in gratefulness, Tim McGraw related “I don’t want to be Tim McGraw– I wanna be Bruce Springsteen!”

In reality, there’s probably no other artist who knows himself better or feels more comfortable in his own skin than Tim McGraw.

Country Music Alley already broke the news that Tim McGraw and Florida Georgia Line’s Tyler Hubbard have a very special collaboration. Both chart-toppers are beyond excited about Undivided. Tim declared “I knew this was the one I wanted to be singing for a long time” on social media.  That’s usually a great sign that a song becomes a lasting hit.

In these times of unparalleled destruction and division like never before in the nation’s history, an anthem that speaks to unity and common ground is a musical balm for the soul.  Whether in music, marriage, fatherhood, or friendship Tim McGraw creates bonds built to last.