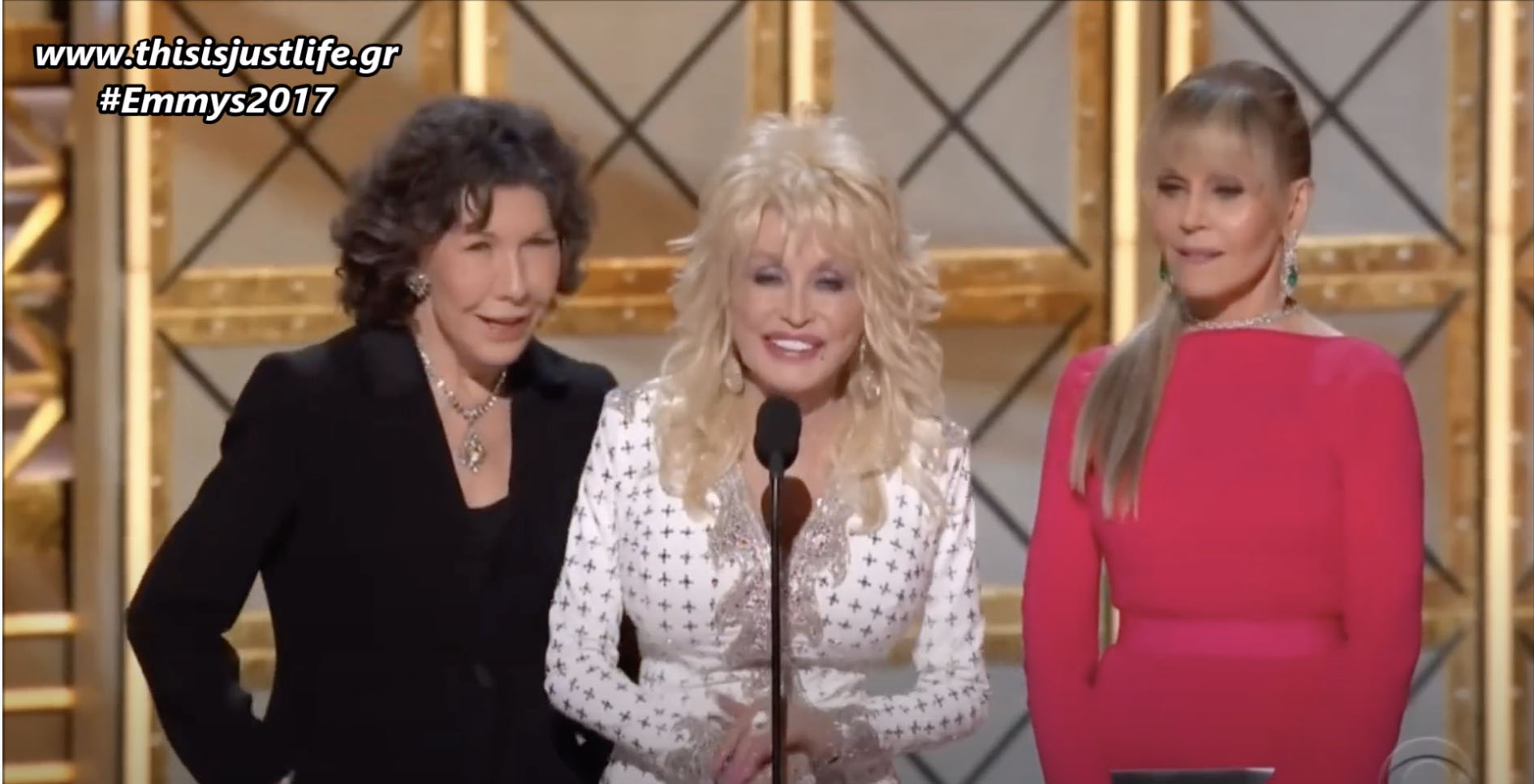 Dolly Parton, Lily Tomlin, and Jane Fonda share more than the starring bill in one of the most beloved and transformative films of the modern era.  The three giants in entertainment are more than social icons.  The bond that drew them together in 1980 on the set of 9 to 5 has remained strong through the four decades since the shooting wrapped.

Despite many discussions and reunions over the years on stage and on various occasions, Dolly Parton and her dear friends never managed to get a 9 to 5 sequel that was up to the standards of the Oscar-nominated comedy.  Never dismay, because Dolly Parton lovers and film nuts who never get enough of the sisterhood or anti-boss antics of Judy, Violet, and Doralee have the best shot ever at seeing a reunion of Lily Tomlin, Jane Fonda, and Dolly Parton on the small screen in a few months.

Lily Tomlin dropped in to talk to Hoda Kotb and Jenna Bush Hager on Today just days ago.  The comedic legend hasn’t lost any of her wit or wisdom and she’s still full of hope for a reunion with Dolly Parton, herself, and Jane Fonda for the seventh and final season of Grace and Frankie, which starts production in June.

The love between Dolly Parton, Lily Tomlin, and Jane Fonda stays as strong as ever through 40+ years.  Even in the first season of their Netflix comedy gem, Lily and Jane fielded questions on Today about when Dolly would guest star.  The timing was a little too early then, but Lily Tomlin says that things have worked out perfectly for a Dolly Parton welcome now.

“We’ve got a great role for her this time,” Tomlin insists. “I think she will do it. I’m just hoping she will.” It was obvious that Lily Tomlin was wishing on every star and crossing all her fingers and toes to make this role with Dolly Parton happen.  She also understands how “unbelievably busy” Parton is.

“She’s always writing books or writing songs or doing something for people or helping the people in Tennessee totally,”  Tomlin gushed.  The lady known for creating unforgettable characters like Ernestine and Edith Ann details that the production will allow Dolly Parton to fulfill her role remotely if she chooses.

This trio of talent obeys restrictions provoked by the virus that affect the health of seniors in particular.  Dolly Parton celebrated her 75th birthday last week. At 82, Jane Fonda is fabulous as ever and just got news of her Lifetime Achievement Award at the upcoming Golden Globes.  Lily Tomlin is vibrant at 81, admitting that “If I couldn’t get a job, I made one for myself” throughout her career.

The premise of Grace and Frankie certainly fits fine for Dolly Parton.  The two title characters are thrown together when each of their husbands announces they are leaving the ladies– for each other.  Tomlin values how the Netflix series shows that women of any age can embrace full, fun, and adventuresome lives, filled with “mischief.”

Lily Tomlin and Dolly Parton get involved for important causes

Dolly Parton and Lily Tomlin care about important causes. Dolly Parton devoted her attention, time, caring, and dollars to funding a cure for the virus, and the Moderna vaccine is the realization of her heartfelt effort.  Aside from this vital, life-saving mission, Dolly makes a lifetime difference for millions of children across the globe each month.  Her literacy initiative, the Imagination Library, in honor of her father, Robert Lee Parton, provides the gift of reading and learning for children and parents through individual books mailed to each child. Her lessons in giving started in Sevier County, but they thrive as a legacy today.

Lily Tomlin feels passionate about her role as producer and the well-being of planet Earth.  The film, Radium Girls depicts the real-life story of courageous women in the 1920s who saw the doom for the environment if toxic, “forever chemicals” were dumped irresponsibly and seeped into soil and air.  Dolly Parton demonstrates her love and respect for the natural environment in countless songs of her “Tennessee Mountain Home” and throughout her Dollywood theme park.  Many areas of the venue are set aside as natural refuges for wildlife.

Tomlin told viewers of Today how they could support the Sierra Club and her film by signing an online petition.  Lily isn’t so different from herself in the 70s, and neither is Dolly.  Both luminous ladies still carry wisdom and grace in such powerful and unique ways. Jane Fonda lives a life of activism on and off screen for years.

Dolly Parton vividly remembers how she “got to dress up like a big city girl” in a beautiful pink satin gown with lace overlays for the premiere of 9 to 5 in 1980.  Dolly wore the dazzling Ann Roth evening dress for the festive night with Jane Fonda and Lily Tomlin, and her clicking acrylic nails inspired the sound of typewriters for the songwriting wonder.  Her theme song for the film earned its only Oscar nomination.

The wardrobe designers for Grace and Frankie probably don’t keep lots of pink satin or lace lying around but Dolly Parton can always be her magical, wonderful self in any attire.  When she stood in between  Lily Tomlin and Jane Fonda at the 2017 Emmys, Dolly Parton steered clear of the quotes about a certain type of leader from 9 to 5. Her character, Doralee did the job of hog-tying Mr. Hart, after all.  Instead, she said, “I understand support,” playfully poking fun at herself and even giving a shout-out to Dabney Coleman.

There’s nothing like supportive friends through the rough patches of life.  Having some fun with longtime gal pals like Lily and Jane seems like the perfect reason for Dolly Parton to return to screens and create the kind of love, laughs, and unity as only she can.