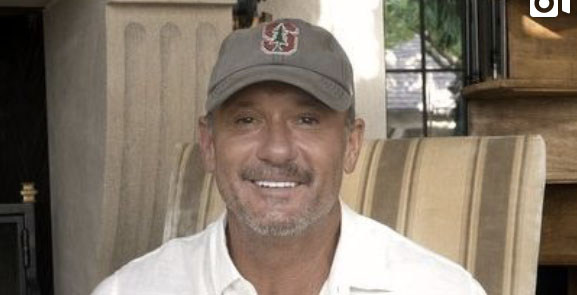 Whether standing solo or singing soul-to-soul with his incomparable wife, Faith Hill, Tim McGraw is a pro at filling any arena in country music.  The pandemic put the brakes on most of the plans for 2020 in the music and entertainment world.  However, the man who creates hits with heart and near-machine precision never lets any negative situation takeover his attention.

Tim McGraw took the songs from his album, Here On Earth, to every intimate, small screen, and virtual outlet available to give fans the feel of the music that mixes mental vacations to the California coast with authentic homespun gratitude.  Songs like “Hallelujahville,” “Gravy,” and “I Called Mama” were resilient reminders of what really matters in life.  The McGraw-Hill clan made their own fun for the holidays, keeping family first.

Amid the festive spirit, Tim McGraw also planned a special holiday project in the works with Tyler Hubbard of Florida Georgia Line.  The plea for unity and acceptance which rings through every verse of “Undivided” has never been more needed.  And the duo illuminated city of Nashville was brighter than any marquee for the Celebrating America performance on inauguration evening.

Larry King and Hank Aaron lit up many marquees in their lives.  The broadcast interview legend and the Atlanta Braves right fielder passed just one day apart from one another.  King died on January 23, while Aaron passed in his sleep on January 22.  Larry King battled COVID-19 through his final days and was 87.  Hank Aaron was 86.  In a Taste of Country video, Tim McGraw conveys how both heroes profoundly touched his life.

No other personality in television or journalism likely touches the 50,000 interviews conducted by Larry King over his career, best known through his 25 years at CNN.  The broadcast pro never put stock in diligent study and preparation over his subjects.  Instead, King focused on truly listening to the cavalcade of notable people who sat across from him.  He asks the questions viewers would ask, and his answers took viewers on incredible journeys.  The conversation wrapped with a kiss from Marlon Brando and surprising disclosures from nearly every subject.  Tim McGraw liked Larry’s style.

“I’ve had several opportunities throughout my career to sit and talk with Mr. King,” Tim McGraw, respectfully comments.  The Country icon considers the time to be “some of my favorite discussions and interviews.” Larry King always sounded the same, only the subjects aged over the years.  McGraw describes that King was always “welcoming, knowledgeable, and generous with his interest.” No matter the stature held by any star, everyone values someone who listens.

In an early snippet with Faith Hill and Tim McGraw, the couple is cozy and holding hands as Larry probes the question of duet partners needing more than good voices.  Faith and Tim had the spark in more ways than one then, and it still burns today.

Tim McGraw muses “wish we had more shows like his to get to know folks on a different level.”  The very same wish echoes through the lyrics of “Undivided.”  McGraw frequently downplays his skill as a songwriter.  His gift for prose in beautiful posts to his wife, his daughters, and others who mean most in his life are songs for the taking and keepsakes forever.  A way with words takes many forms.

Tug McGraw famously rallied his 1980 Philadelphia Phillies team to victory with his constant, spirited cry of “You gotta believe.”  The famous father and son had some tumultuous times in forging their relationship.  In the end, though, forgiveness and grace go a long way with healing hearts.  Tim McGraw sought the best treatments and opened his home to Tug through his final bouts with brain cancer before his passing in January 2004.  There’s no doubt that baseball was a topic of conversation.

“Hank Aaron broke records and broke barriers,” Tim McGraw reflected, noting how Aaron “played the game with such a wonderful style and grace.”

The player himself often questioned whether his acclaim in breaking Babe Ruth’s record was worth it.  He endured years of hate mail, ridicule, and public vitriol from those offended that a man of color made an indelible mark on history that superseded their hero.  Hank Aaron’s character was a beaming strength to all around him and spoke volumes about the athlete.

Tim McGraw mentions that his dad gave up “4 career home runs to Hammerin’ Hank.”  The son takes wisdom from his father’s approach to pitching to Aaron with bases-loaded.  The senior McGraw said he would pitch to the record-breaker the same as any other hitter, “but I wouldn’t be damned fool enough to let go of the ball.” Humor and straight-shooting run in the family.

“Godspeed Hank,” Tim McGraw closes the tribute.  The family man also has a tribute to another man of honor in the family.

Birthday love for another beloved McGraw

Larry King and Hank Aaron will be forever lauded in the halls of broadcasting and baseball, rightly so. Tim McGraw took time to send birthday love to another Hank, Hank McGraw, on social media.  The “You Had to Be There” singer ensures that his uncle and his story gets some worthy attention.

Along with the happy birthday wishes, Tim McGraw includes “the uncommon story” of Hank McGraw’s life after baseball.  The details could fill a full-length book (and maybe a pretty good film) about the relative who had pretty good game stats of his own in a rising run with professional baseball.  Rather than lean on his last name and “go along to get along,” Hank McGraw took a stand for fair treatment of players.  It came down to even the choice of jewelry preferred by players.

Uncle Hank you have taught my daughters by example in how equality matters on all levels at all times…
We love you and Happy 78th!!

Tim McGraw gives the gratitude of a father in expressing to Uncle Hank how “You have taught my daughters by example how inequality matters on all levels at all times.” Hank’s stand for equality makes the difference for future McGraw generations.

Let’s hope this living example of staying “Undivided” teaches lessons from now on.