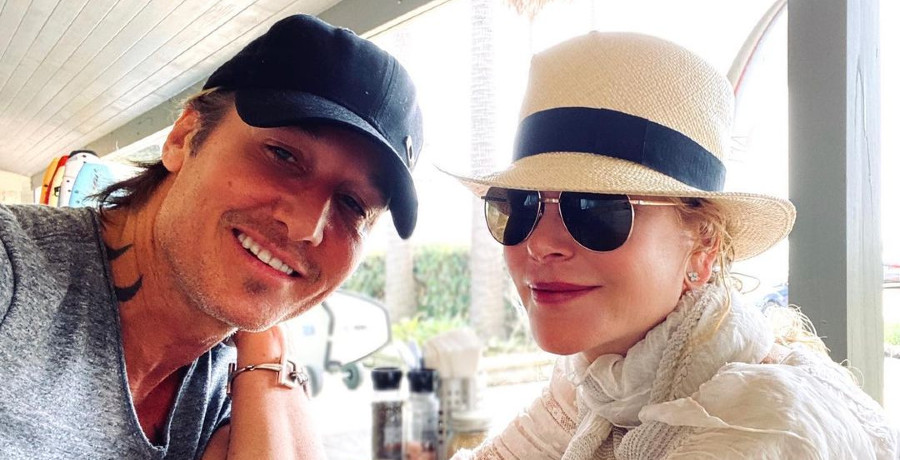 Country music’s ever-amiable Keith Urban prefers his wide assortment of custom-tailored T-shirts over the clanky metal suits of King Arthur’s and Sir Lancelot’s day.  The energetic, 53-year-old megastar likes to be comfortable and completely at ease while delivering incredible riffs on stage or in one of his endless virtual performances.  The prolific performer, singer, and songwriter needed a nudge from a good friend to cheer up and get going on The Speed of Now Pt. 1, but once Keith Urban’s creative fuse gets lit, it’s impossible to extinguish.

When it comes to his beautiful, adoring wife, Nicole Kidman, however, Keith Urban constantly dons the full-on armor of a regal Knight.  Keith and Nicole have been spending time with family in Australia to maintain a sense of normalcy for their 12 and 10-year-old daughters, Sunday Rose and Faith Margaret.  Country Music Alley related recently how Kidman compares family life during the pandemic as being “commune-like,” raising “each other’s kids together.”

Despite the mutual family support, Nicole Kidman is very candid about missing nights out, whether for a simple dinner, the movies, or a night at the opera.   The UK’s Daily Mail and Hollywood Life verify how Keith Urban defends both his wife’s honor and her body from the swat of an opera aficionado who didn’t care for her enthusiasm.  Sir Keith stepped up in a flash.

Security is an essential necessity for Keith Urban and Nicole Kidman, among many other high-profile couples in the entertainment realm.  At the close of a performance of The Merry Widow, last month at the spectacular Sydney Opera House reports detail that a 67-year-old man, also in attendance, “swatted at” Nicole Kidman after being offended by her enthusiastic standing ovation and cheers for the cast.

The gentleman and the “Stupid Boy” singer get into a heated exchange.  Keith Urban summons the security detail to escort Nicole and her mother, Janelle, off the premises.  The CMA Entertainer of the Year clearly felt the move was aggressive, reportedly accusing the offender of assault.  The Daily Mail account describes that Nicole Kidman was visibly upset after the incident, and someone called the police.   Sydney City Police Area Command officers “spoke to both men and no further action was taken” as noted by the Sydney Morning Herald.

It’s a good thing that the said gentleman doesn’t attend any well-known country music nights of celebration.  Keith Urban and Nicole Kidman celebrate with the grandest passion ever from the front row.  The two never got a reputation for toning it down.

For many years, opera audiences expected to stay in their seats and offer only respectful applause.  Because the age-old performance art seeks to attract younger fans, standing up and giving more demonstrable (and audible) approval is not such a no-no.  It’s understandable why Nicole Kidman needed to let off some steam with Keith Urban and her mom.

Beyond the stresses that everyone feels being cloistered for the long-term, the star of The Undoing just completed her mandatory quarantine after being in Ireland for a film project with Ethan Hawke and Alexander Skarsgard, Nicole Kidman’s Big Little Lies co-star, also familiar from True Blood.  The four walls of quarantine-approved hotels lose any hint of comfort when you can’t be with anyone you love.

Keith Urban is the epitome of “a lover– not a fighter,”  except for Nicole, the kids, and the song, No one shines more positivity from her performance than the “Polaroid” memory maker.  Fans can’t wait to be in line for genuine live shows, and Keith has been eyeing December 2021 for a string of shows in his homeland of Australia.  He’s figured out the logistics of having Pink join him via giant video screen. No one will leave without “One Too Many” running through their heads.  Keith can count on Nicole Kidman in the loudest cheering section for him and Pink. The “Just Like a Pill” singer-songwriter has become a family friend.

Best Actress in a Limited Series, Anthology Series, or Motion Picture Made For Television

Nicole Kidman likely won’t have the typical Golden Globes experience she loves quite yet.  The Oscar-winning actress is up for Best Actress in a Limited Series, Anthology Series, or Motion Picture Made for Television.  She’s got the edge as Grace in The Undoing, but the virus is halting traditional red carpets.  No matter where or how, she can still dress up for the night and have hubby Keith Urban on her arm, her own knight.