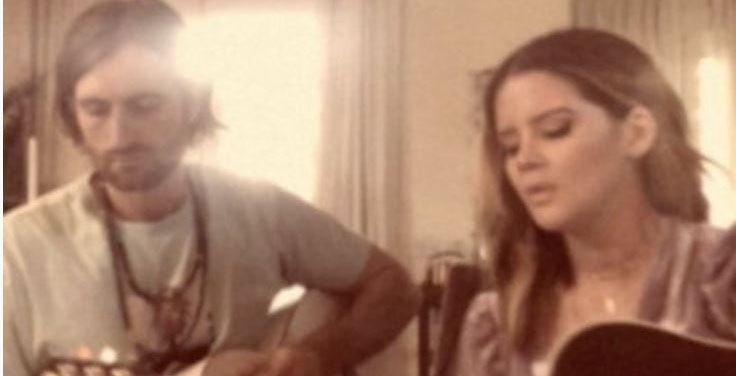 Fans of Maren Morris had reasons to wake up early this morning.  Already, many followers of the straight-talking, splendid songwriter are counting down the seconds until the official release of “Chasing After You” in official video form.  The tender, can’t stay-away love song is the first duet between Maren and her husband, and creative partner, Ryan Hurd, as Country Music Alley reported earlier this week.  An added treat tops off the breakfast table this morning, February 12. Maren and Ryan were cozy, candid, and smiling during a deep-down visit with Anthony Mason of CBS This Morning.

“We’ve written a lot of songs together and for each other,” Ryan Hurd reflects to Mason. “But this is the first time” for the couple to sing and “step out in this way.”  Maren Morris gives an approving glance.

The creative partnership between Maren Morris and Ryan Hurd sparked magic and mammoth success straight out of the gate.  The two met in a songwriting session back in 2013.  The first song they wrote together was “Last Turn Home.” Tim McGraw snatched up the gem in a nanosecond for his Sundown Heaven Town album.  The country superstar’s latest songwriting partner is FGL’s, Tyler Hubbard.  Maren Morris never forgets the moment of hearing McGraw’s voice sing her words.  “You never forget that first cut,” she assured in interviews at the time.

Ryan Hurd and Maren Morris made definite plans to keep writing together after striking McGraw gold, but Maren resisted becoming the cliché of “two songwriters fall in love,” so rampant in the industry.  Artistry and attraction soon broke down the self-imposed walls.

High praise from a husband

“I was always just in awe with the way she could sing and the way she could write,” Ryan Hurd praises his wife.  He asserts that her songs are “different songs than anybody else.”  The supportive spouse finds Morris’ gifts “intimidating and special at the same time.”

As passionate and downright steamy as the video snippets are in the preview captures of the video for “Chasing After You” are, both Ryan Hurd and Maren Morris agree that his 2017 debut single, “Love In A Bar,” captures the real story of their romance.  Hurd declares that their relationship translates through “every single line” of the song.

Cigarettes left behind lead to a ring for Maren Morris

Even the closest of lovers can’t always be on the same page, and that was the case for Maren Morris and Ryan Hurd’s one fateful Fourth of July trip to Michigan to see his family.

“I was being a nightmare that weekend,” Maren Morris confesses.  She wanted to be engaged, and the secret clock she had on Hurd for taking action was running out. Little did Maren know her man already made plans.  Lack of cigarettes leads to a surprise proposal.

“I had this ring in my pocket for like a month,” Ryan details during the interview. “That’s some country stuff,” the songwriter playfully adds.

Maren nearly blows a fuse when Hurd says he forgot her cigarettes while the two are in the middle of a lake on a tiny boat.  Just as “The Bones” hitmaker asks “Why the h*ll are we out here?” she turns to see Ryan on one knee, offering the ring.  The rest is romantic history for the couple, and the pair is a portrait of persistence through unforeseen perils.

Pandemic, postpartum separation was almost the fate for Maren Morris and Ryan Hurd

“The Bones” speaks to the power of true love to stand through trial.  “The Middle” endorses compromise and unity in negotiation. Oddly enough, it wasn’t that long ago when Maren Morris proposed an extreme measure to her husband.

Ryan proposed to Maren in 2017, and the couple married in 2018.  Maren Morris headlined the Houston Rodeo last March and simultaneously visited with Anthony Mason just before the show and the arrival of her son with Ryan Hurd.

The proud mama pulled through, describing the ordeal of her emergency C-section delivery as “pretty gnarly at the end.” Hayes Andrew was breech and usual methods of turning him were unsuccessful.  After 30 hours of labor, the beautiful boy greeted the world.  Maren Morris credited the “amazing” and literally life-saving medical team who made his arrival possible.  Maternal joy became superseded by the shadows of postpartum depression.

In a Brighter Place

“Better Than We Found It” is a mother’s wrenching cry and a heartfelt pledge to her son to leave a more empathetic and compassionate planet.  Maren Morris promises “I will spend the rest of my waking days making this world, which you find so fascinating, better than I found it,” in a video message to accompany the protest ballad last October.  Sincere as the words are, the mother admits now that she seriously considered telling Ryan to go somewhere else and let her take care of the baby on her own.  Morris equates the proposal to the mindset of “I don’t want you to see me like this.”

Much to his credit, her spouse looks for ways to help her without agreeing to the plan.   The two never even slept in separate rooms.  Ryan bore with Maren as she got past the darker periods.  Looking back, she tells Anthony Mason how “I was still in it,” referring to the throes of depression when they spoke last year.

“It takes a while for it to lift,” Maren Morris speaks of postpartum depression.  “It’s not overnight.” Nonetheless, the songstress and her life partner are in a much happier, healthier place.

Like her contemporaries in country music, Maren Morris misses the audiences, but cherishes this time with her family, like no other she can celebrate “except when I retire.”  Ryan teases that he would love to retire one day– something not often said by musicians.  He can’t see his wife taking that step.

One thing is sure, the chase is the most delightful element in any romance.  Maren Morris and Ryan Hurd will likely stay in pursuit between parenting, passion, and planning the future forever.