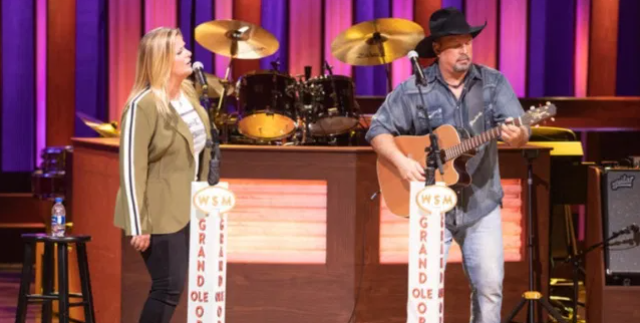 Garth Brooks performed his 1991 hit “Two of a Kind, Workin’ on a Full House” with his bride Trisha Yearwood at the Opry. Their performance was part of the two-hour special from NBC, Grand Ole Opry: 95 Years of Country Music.

The performance was originally taped in the Opry circle on May 2, 2020, and aired during the special celebrating the history of the Grand Ole Opry. Both Brooks and Yearwood are members of the Opry. Brooks was inducted in 1989 and Yearwood received her induction in 1999.

Garth Brooks first met Trisha Yearwood in 1987 when they were both unknowns in country music. They were put together and recorded a demo track, but Garth recalled their first meeting clearly years later. He said meeting Trisha was “like when you just meet your wife.” But the “Thunder Rolls” singer was already married and he was determined to make his marriage work.

Garth and his first wife Sandy Mahl have three daughters Taylor, August, and Allie together. Brooks announced his retirement from country music in 2000 so he could focus on raising his daughters. But Brooks and Mahl divorced in 2001, and soon after Brooks and Yearwood began dating.

Trisha said the first time they sang together, “It felt like we’d sung together forever.” Brooks even helped Trisha land her first record deal. Yearwood was the first female country music artist to sell one million copies of her debut album. It included her hit single “She’s in Love with the Boy.”

Trisha is now mostly focused on her career with Trisha’s Southern Kitchen and her multiple cookbooks.

The couple married in 2015, and since then have made a point to be close to each other. Yearwood credits the success of their marriage with being physically present with each other, explaining, “We do date nights, but honestly, we are apart maybe five days a year. We really have made a conscious effort since getting married to not be apart, so we’ve toured together. If I’m doing something, he’ll be with me, even if you don’t see him, he’ll be in the hotel or around.”

NBC made a true effort to showcase the history of the Grand Ole Opry and celebrate country music with this special. The Opry has been called the “birthplace” of country music. The hallowed halls tell the story of so many legends and pivotal moments in music over the last ninety-five years.

The special was rounded out with videos from past performances as well as interviews from the Opry’s history. All of this came together to create a truly special night for country music.