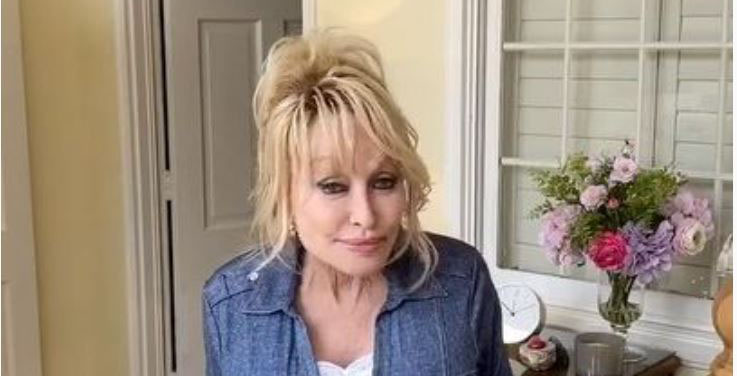 One-woman entertainment dynamo Dolly Parton makes news no matter what she does.  The generous heart of country music’s greatest living songwriter took many headlines over the past year. However, it’s not because the “I Will Always Love You” singer draws attention to her good deeds.  Dolly Parton lives by the credo of doing good, not getting the glory.  Those ethics play a huge part in answering why the artist is speaking out again on declining a statue at the Tennessee State Capitol.

Dolly Parton made her thoughts known late last month on a proposal to have her image cast in precious metal and placed on a pedestal facing the Ryman Auditorium, the holiest of homes in country music lore.  Dolly takes her spiritual intuition from the life example of her mother, Avie Lee. Avie Lee often had visions and dreams regarding God’s plans.  As much as the daughter extols “the mother church” of country music in songs like “Daddy Was An Old Time Preacher Man,” Dolly Parton puts it bluntly regarding being in bronze.

“I personally do not want that,” Dolly asserts.  It’s a future task that “can be done after I’m dead and gone,” Parton puts it.

According to CBS News per MSN and other sources, Dolly Parton phrases her gracious decline of the gesture even more directly.

“I want to thank the Tennessee legislature for their consideration of a bill to erect a statue of me on the Capitol grounds,” Dolly Parton opens in a statement.

Let’s think about this later

While the singer mentions how “honored and humbled by their intention” she is, she asks that the bill be removed from “any and all consideration.”   “Given all that is going on in the world, I don’t think putting me on a pedestal is appropriate at this time,” Dolly declares.  The inspiring artist who encourages her fans to “Try” in her beloved anthem from Blue Smoke does leave the door open for the honor “somewhere down the road several years perhaps after I’m gone,” assuming that “you still feel I deserve it,” Parton adds.  In that eventuality, Dolly Parton promises “I will stand proud in our great state Capitol as a grateful Tennessean.”

Despite the cries coming from fans in a CNN feature and other corners to erect a monument to Dolly Parton, her humble values rooted since childhood speak within the artist that the time is not right.  Just as the donor doesn’t want to jump the line for the vaccine her funding made possible. Dolly Parton won’t accept a personal accolade in a time when so many are still suffering.  She exemplifies a soul of grace.

Every minute matters to Dolly Parton

Dolly Parton takes every moment of life as a gift, and she relates in so many of her songs and stories of her childhood.  The TV film adaptation of Coat of Many Colors vividly conveys her heartbreak as a young child. Especially over the unexpected loss of her baby brother, Larry, shortly after birth.  The welcome sibling was to be hers to care for and help raise.  When the younger brother, Randy, arrived, her mother announced to all the clan that they had a real-life baby who cried, and wet, and ate, better than the ones from the catalog that they could never afford.

Randy and Dolly Parton shared a second dream come-true duet singing “You Are My Christmas” on Parton’s legacy Christmas collection. This Christmas collection is aptly called A Holly Dolly Christmas.  The preternatural performer knows that the collaborative effort is likely her singular holiday album. However, she could never predict that two days after her 75th birthday, Randy Parton passed from cancer.  Each one of his Dollywood performances with the Parton family has become treasured keepsakes forever now. Dolly Parton doesn’t want to waste a moment standing still, even as a statue.

The many included in ‘My People’

When Dolly Parton realized the devastation of the 2017 wildfires in the Smoky Mountains, she mobilized her My People Fund through the Dollywood Foundation to provide $1000 checks to those most in need for six months.  There are always naysayers who find fault with every act of goodness.  Dolly doesn’t let negativity distract her from wasting precious moments in the time of most need.  Now that vaccines are going into arms worldwide, step-by-step, the entire world population has become part of Parton’s “my people.”

There is a precious window for children to latch onto a love of reading, too. Dolly Parton started her Imagination Library as a simple program honoring her father, Robert Lee Parton, who never learned to read.  The singer of “Daddy’s Working Boots” regularly credits her father as “the smartest man I ever knew” and the man who worked until he dropped to provide for 12 children.  Daughter Dolly Rebecca expresses her delight when her dream of starting literacy stretched to “some surrounding counties” beyond her native Sevier County, as she describes Dolly Parton’s America.   Dolly’s heartfelt dream encircles the world with every delivery of a book addressed to a child each month.  Of all the superlatives used to describe the artist, her favorite moniker is “The Book Lady.”

There’s no doubt that Dolly Parton sees the suffering and need persisting in these pandemic times, from the tragic aftermath of the February freeze in Texas to the seniors still in long lines to get their life-saving shots.  Parton doesn’t do politics, from any side, but she thrives on loving people and “unearthing love” together on common ground, as she posted on social media as her birthday plea.

Dolly Parton has an entire team to make her stage costumes glisten, as fans see in the bonus footage of her Time-Life anthology.  That expense enables her work and her ability to provide fans with unforgettable memories.  Don’t expect Dolly to lay down big bucks on any outfit or bauble, no matter how many rhinestones and crystals.

“When I see a $3000 coat or a $5000 purse,” Dolly Parton explains to Scandinavian host, Skavlan, “I think of how my daddy could live a year on that money,” the songwriter stresses.  It’s a good thing that Dolly inherited her dad’s business savvy, and her mother’s heart to see people and value what matters most.

A statue is a lovely tribute.  Dolly tells the story of how her father expressed his love by cleaning her statue in their Sevierville hometown.  Still, a statue is another version of an oversized trinket, albeit very tall and heavy.  The artist defers the title of being a “star,” recalling that a star is “just a bag of gas” as she remembers from her younger years.  The legendary artist is much more than someone standing in metal.  For now, one statue is enough for Dolly Parton.  The legacy of her heart will last forever, no matter how many likenesses ultimately stand in bronze.