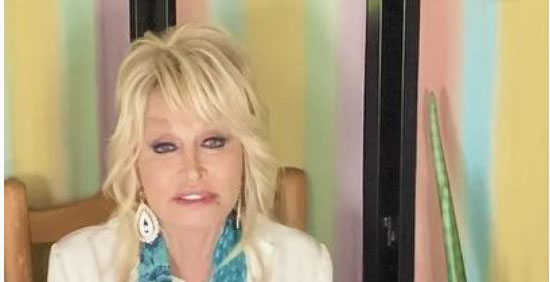 Dolly Parton, like many country music fans, is waking up to the news that one of her long-standing records is now tied by none other than Taylor Swift, as People confirms.  The truth is, Dolly likely would be the first to congratulate Tay-Tay on her first number one Country debut of “Love Story (Taylor’s Version).”  All records come and go with time, and when it comes to musical success as a country artist, no one touches Dolly Parton’s Guinness World Record-honored milestones, among many more.

Trophies and plaques honoring Dolly Parton and her songs are numerous enough to require several rooms.  While it’s true that the Rhinestone leading lady always shines and sparkles, merely collecting hardware doesn’t matter nearly as much as doing something worthwhile with her time on earth to the stellar philanthropist, singer, and songwriter.  As a Today feature details, the entrepreneur and entertainer didn’t just start turning down honors with the proposal to be on a pedestal at the Tennessee state capitol.  The timing just wasn’t right for this esteemed gesture, and Dolly Parton has good reasons for all her other refusals, too.

Don’t be offended if Dolly Parton gives a polite ‘No, thank you’

Early hours come with growing up on a farm.  Dolly Parton famously does a full day’s work with her business endeavors between the hours of 3:00-5:00 AM, as she frequently discloses.   Just imagining the demands of her inbox is daunting, much less responding to them all.

Country Music Alley previously reported on Dolly Parton’s decision not to accept the Presidential Medal of Freedom—twice from the Trump administration.  No repeat offer for the country’s highest civilian honor has officially been extended, but Dolly Parton may not accept the honor from President Biden, either.  The songwriter lets her music speak her heart never plays politics and she deftly straddles the political line.  Parton loves people of every ethnicity, diversity, and gender identity. She looks for the “God-light” in every person.  Fans all over the world feel that acceptance and radiate love right back Dolly Parton.

If Katy Perry got her way, fans would recall the memory of Dolly Parton dancing with the “Firework” singer, and the sharks, at the 2015 Super Bowl.  At the time, Dolly’s husband, Carl Dean, had some health struggles, and Dolly couldn’t leave him.  “I love her,” Parton says of Katy.  “One of these days, maybe we’ll do it again,” Dolly encourages her followers in a GQ video. What many fans don’t realize is that halftime performers at the Super Bowl pay all the expenses and put together all the production for their spectacle.  That’s a more difficult undertaking at 75, even with a dedicated team. Still, Dolly recently confessed “I’ll probably do it,” at some future point.

Sometimes, it takes more than one request

As much as Dolly Parton adores the drag community, the beloved icon hasn’t fulfilled the role of a guest judge  RuPaul’s Drag Race.   The long-running,  fun-loving, and Emmy-winning show, currently on VH1, seems tailor-made for Dolly, with some alterations.  Nonetheless, the competition romp has never managed to Parton on the judges’ panel.

“We have asked Dolly for 11, 12, 13 years,” longtime judge Michelle Visage insists.  “At the end of the day, it’s scheduling (that creates the problem) and it’s a very long day for these people.”

Her absence doesn’t mean Dolly Parton doesn’t love the dressed-to-the-nines production.  In 2012, the lady who looks sensational in sequins posted a personal fan message on her social media.

Dolly Parton dropped a deal with Elvis Presley to allow the King to record his version of “I Will Always Love You” following her 1974 classic.  The savvy businesswoman in Parton wouldn’t let her part with half the rights to her song, no matter who sings it.  She continues to maintain full rights in songwriting for the music she creates.  She also gives credit where credit is due.  The 1992 Whitney Houston triumph with the ballad left Dolly Parton “so in awe” that she had to pull off the road and soak in the emotion.

Just as Taylor Swift took her 2008 “Love Story” to new places with her re-recorded version, Dolly Parton took “I Will Always Love You” to the screen for The Best Little Whorehouse in Texas, and the 1982 song did just what Swift’s did—debuting at #1.  The second time to the top is even sweeter.

Still time to do so much

Dolly Parton never wastes one precious minute thinking about why she turns an accolade aside.  She puts her skills in business and art to good use, but more often than not, there is a mission to make the world better behind the branding.  By the way, no one should ever hope to see Dolly on any of her theme park rides at Dollywood. The singer doesn’t do that aspect of promotion.  “I don’t like them.  I never have,” Parton bluntly declares.

Dolly’s new fragrance becomes widely available in July, and fans will have to wait to see if Dolly makes Super Bowl dreams come true.  Whether an act of kindness or a song brings a smile or a major life change, Dolly Parton lifts the world in her own way and her reward will come later and be far more lasting than any golden knickknack.