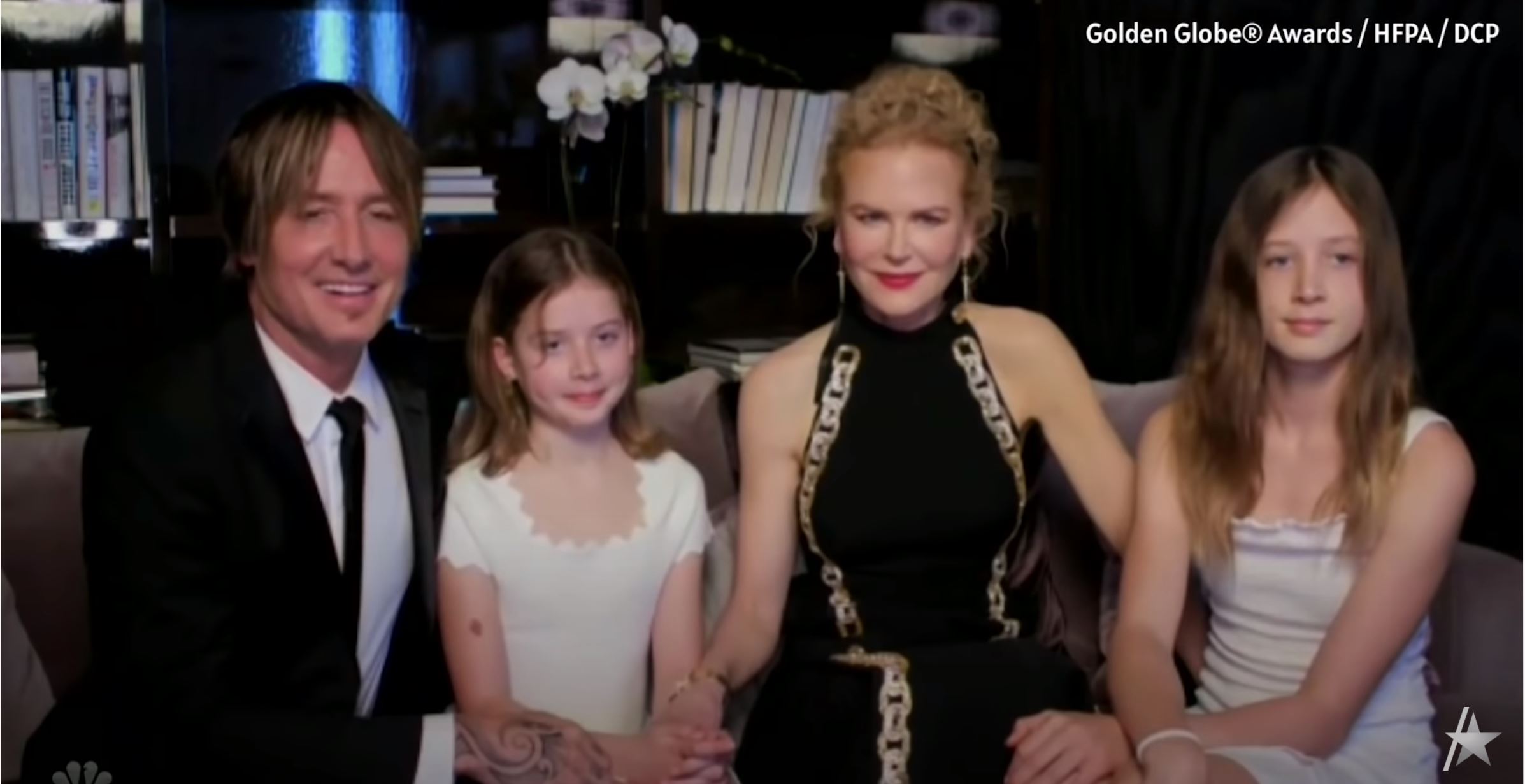 Country music megastar and guitar maestro Keith Urban and his wife, the Oscar-winning, acclaimed actress, Nicole Kidman, have a history of turning heads and dazzling paparazzi and onlookers at the Golden Globes.  Pandemic precautions put a different slant on this year’s 2021 festivities.  Even the hosts, Tina Fey and Amy Poehler broadcast their comic gold repartee from opposite coasts.  Most of the evening’s A-listers and nominees celebrated from their sofas, and Keith Urban and Nicole Kidman always add style wherever they are, even at home.

Dressing up is nothing new for the devoted couple.  The statuesque Nicole Kidman consistently fulfills every designer’s vision with her way of knowing how a gown should glimmer and flow.  Keith Urban compliments her style with his own elegant look for special nights out.   In fact, the two still manage to stand out as fashion icons, artists, and loving parents.  As Glamour per MSN confirms, Keith Urban and Nicole Kidman invited the most beautiful, VIP personalities on their list to this award experience—their daughters, Sunday Rose and Faith Margaret.  Who took home the trophies never mattered to the girls. Mom and dad always take first place.

Beautiful in smiles and black-and-white for Keith Urban, Nicole Kidman, and the girls

Nominations for the Golden Globes aren’t something that comes around on just any Sunday.  Keith Urban and Nicole Kidman are notorious as fiercely protective parents.  Indeed, the parents guard against social media exposure for their daughters.  In December, when Faith celebrated her 10th birthday, Kidman opted to only show the cake, adorned with glowing pink candles, the dearest wishes, and lots of love from the family.  The working mother and the girls benefit from the extended family surrounding the girls during their time in Australia.

Sweet smiles outshine the gold metallic braids enhancing Nicole Kidman’s Louis Vuitton halter-neck design for the star’s big night. Big sister, Sunday, 12, sits beside Kidman, while Faith contentedly stays between both parents.  The daughters dress in delicate white dresses.  Sunday’s style is a bit more mature, with slender shoulder ribbon straps.  Lace accents feature in the dresses, with Faith’s displaying a needlepoint-look detail in the neckline.  These daughters inherit quite a legacy in artistic gifts, whether from their mother or their daddy, Keith Urban.  Keith and Nicole seem to clearly encourage their daughters in finding their own passions, and still celebrate their youth. No parent wants grown-up concerns to come too fast.

Keith Urban and Nicole Kidman both admit to struggling during the pandemic isolation.  Keith Urban credits a good friend for the conversation that if got the “One Too Many” singer up and off the couch to record The Speed of Now Pt. 1, with its reflective and resilient tones.  Like her daughters, Kidman misses the spur-of-the-minute visits to friends, going to movies, or doing anything social.  Even virtually, a special night with peers and friends is just what the doctor ordered.

The Kidman-Urban family takes the prize for the prettiest rare portrait.  However, several other stars apart from Keith Urban and Nicole Kidman got surprised by their kids and kin.  No one had room to fit a paperclip between all the people around Kate Hudson on the couch and in every cranny, as an Access Hollywood video proved. Leave it to her two-year-old, Rani Rose, to captivate every heart with her adorable “Hi, everybody!” in the opening greetings.

Mark Ruffalo’s kids burst in on their dad’s winning moment for I Know This Much Is True.  Lee Isaac Chung, the director of the moving film, Minari, got his moving moment from his daughter’s surprise hug.

Grateful for a touch of glamour

Nicole Kidman didn’t take the honors for her part as Grace in The Undoing.  In the taught HBO thriller, her character and viewers battle the inner questions of whether her husband, played by Hugh Grant, murdered one of the mothers at their son’s private school.  Peace is much more plentiful in her partnership with Keith Urban.

Gracious as always, Nicole Kidman expressed gratitude to the Hollywood Foreign Press Association, still much under fire for not representing diversity adequately in all facets of production.  She stressed that “the nominations mean more than you could ever imagine,” beyond the hardware.  She also thanked Ryan Murphy for the Netflix musical, The Prom, another nominee.  “I am simply thrilled, elated, and grateful,” gushed the actress. “Thank you, thank you, thank you! “

It was more than a swat, Keith Urban says

The reward of this Golden Globes affair is clear for Nicole Kidman.  She shared the evening safely with the ones she loves most.  She also looked incredible in designer couture again.  On social media, Kidman thanked Louis Vuitton and design partners for “bringing a little glamour back in my life.  Haven’t done this in a long time,” the Cold Mountain actress reflects gratefully.

A fellow opera fan wasn’t nearly so appreciative of the enthusiasm shown By Keith Urban and Nicole Kidman after a marvelous performance of The Merry Widow at the Sydney Opera House in January.  Country Music Alley reported on the heated exchange between the audience member and Keith Urban after the “Stupid Boy” singer and his wife stood and cheered for “a bloody great performance,” as the musician described on an Australian radio show.

Without hesitation, Keith Urban witnessed that the gentleman “whacked” Nicole. He “like really hit her,” the husband insists.

Proper opera decorum aside, it’s only natural that “you want to defend your wife,” In Keith Urban’s view.  The family night at the Golden Globes concluded on a much calmer note.