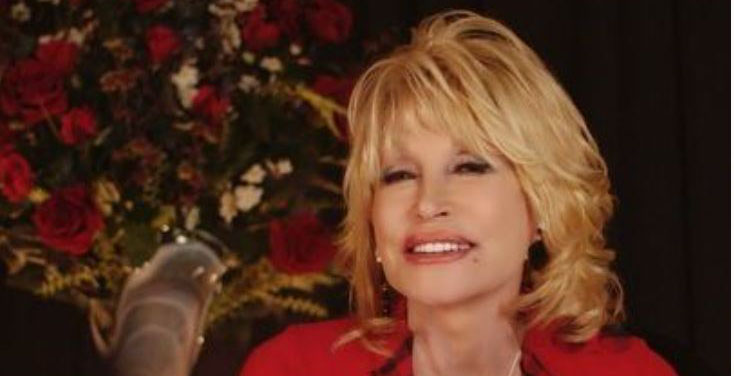 Legendary songwriter, singer, and philanthropist Dolly Parton exudes positivity, light, love, and gratitude wherever she is.  It’s an oversight not to include film star, author, and businesswoman in her impressive resume of credentials, too.  The entertainment dynamo doesn’t just talk about doing good– she lives out doing good for people in her daily example to “be a light” and glorify God through her example.

In her most powerful example ever, Dolly Parton demonstrated courage, conviction, common sense, and pure delight. This demonstration came on Tuesday, March 2.  She received her first COVID-19 vaccine, as Country Music Alley reported.  Naturally, Parton opted to become a candidate for the Moderna vaccine. Assumably because the country music icon largely funded through her $1 million donation last April, as CBS News verifies.

Besides getting to be with her good pal, Dr. Naji Abumrad of Vanderbilt University Medical Center, Dolly Parton did more than sing her own “Vaccine” rendition, spun off from her beloved “Jolene.”  Not long after the doc tenderly administered the inoculation to the national treasure, Dolly Parton responds to the news of her 50th Grammy nomination, as noted by Yahoo news.

After 51 years of honors in music, Dolly Parton gets her 50th nomination

Few artists ever approach the success of more than five decades in the music industry.  In fact, many artists sadly don’t live long enough to celebrate the incredible milestones that Dolly Parton achieves. In 1970, her first Grammy nomination came for the classic, “Someone I Used to Know” with Porter Wagoner.  Throughout the 70s and 80s, Dolly’s reign of nominations continued with fan-favorite hits like “Islands in the Stream,” written by Barry Gibb, to the songwriter’s infectious, sing-along tunes of “Jolene,” “Here You Come Again,” and the daring “Touch Your Woman.”  Hard to believe, but nine years after her first nomination, Dolly took her own Grammy home for her album, “Here You Come Again,” and the Grammys keep coming.

In 1982, Dolly took trophies for “9 to 5” as Best Female Country Vocal Performance and Best Country Song.  Without a doubt, she mastered the mixing of country-pop across the charts. Additionally, the artist explored her roots and took trophies for her masterful bluegrass album The Grass Is Blue in 2001 and for her efforts in harmony with Linda Ronstadt and Emmylou Harris in Trio.  The Lifetime Achievement Award and Hall of Fame honors already belong to Dolly Parton.  Altogether, the ageless artist garners 13 glistening gramophones.

Most recently, Dolly Parton, takes great satisfaction in using her gifts to inspire faith and hope.  Last year, the self-described “spirit-led” artist took a Grammy win for her collaboration on “God Only Knows”. This collaboration is with the Contemporary Christian duo, for KING & COUNTRY.   Dolly receives the honor in Best Contemporary Christian Music Performance category this year, singing with the rock-tinged, faith-filled Zach Williams on “There Was Jesus.”

The song is the reward for Dolly Parton

“Like I’ve always said, I don’t work for awards or rewards,” Dolly Parton stressed in her reaction. Nonetheless, she admits “It’s always special” to gain recognition from peers in music.  “You always love to be acknowledged,” Parton appreciates.  The sphere of love and acknowledgment for Dolly Parton seems to broaden by millions of miles every minute.

Zach Williams shared a piano version of “There Was Jesus” weeks ago, and Dolly Parton offered equal excitement for rendition. Parton unabashedly calls the song “a deep track” that sits close to her heart.

“That particular song– was more rewarding to me than winning an award,” reflects Parton emotionally.  “I felt very blessed to be part of such a wonderful song.”

Faith runs deep for Dolly Parton.  Her mother’s seeds of faith were embedded even before her birth.  She describes that the heartfelt ballad is bound to “mean more to me than a lot of the others, I have to admit.”

Prayer and personal time with God are so important to Dolly Parton that she includes a chapel and prayer rooms on her properties.  Communing with the Creator doesn’t only have to happen in church.

Just to put any controversy to rest, Dolly Parton made it clear that “I waited” for her turn for the vaccine— since December if reports are correct.  The country music queen sweetly scolds the “cowards” afraid of the needle, telling them not to be “such a chicken squat,” as only a Tennessee girl from the mountains phrases.

No one disputes that Dolly Parton owns “Jolene,” and the unparalleled songwriter can do whatever she chooses to her own song.  The singer and her adoring fans, though, may recall that last November, Professor Ryan Cordell, an associate professor in English at Northeastern University, made his own twist on the man-stealer song.  His ode takes full respect and inspiration from the generosity of Dolly Parton and his own fandom following the news that the vaccine was underway.

While Cordell’s version begs “Go in my arm,” following the repeated “Vaccine” in the chorus, Dolly Parton simply pleads “Don’t hesitate,” assuring that when “you’re dead, that’s a bit too late.”

Neither rendition of “Vaccine” will take a Grammy, but the good news is that shots are going into arms across the globe over the next few months, thanks to givers like Dolly Parton, countless dedicated scientists, and the Giver of all good things, No matter how you say it, thank you and Bravo!

How do you feel about Dolly’s 50th Grammy nomination? Let us know in the comment section below. Come back to Country Music Alley for more Dolly Parton news.

Jimmie Allen Puts The APB Out On ‘On My Way’ With Jennifer Lopez
Miranda Lambert Voted One Of Most Influential People 2022
Maren Morris’ Tour Bus Is Far From Humble
Blake Shelton Headlines 2 Major Events, See What
Kelly Clarkson Listens To Fans & Delivers — Here’s How