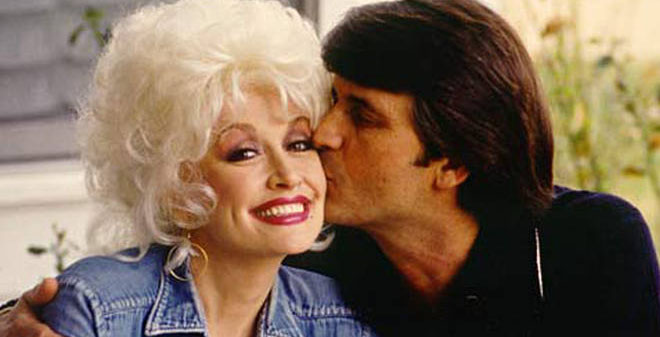 Dolly Parton knows how to write a timeless love song.  The unmatched songwriter wrote “I Will Always Love You” as her message of parting to Porter Wagoner, after years of telling him that the time to spread her own artistic wings had come.  While the two made beautiful music together, Dolly Parton’s 7-year relationship with the man wearing the pompadour and bedazzled suits stayed continually tempestuous due to Wagoner’s temper and need to control.

In her book, Songteller: My Life in Lyrics, Dolly Parton describes how Porter Wagoner broke down in tears after finally listening to her most beloved ballad.  He also insisted that she allowed him to produce her version of the song.  She did, but Dolly Parton broke free from the creative, yet conflict-ridden partnership in 1973.  She sang the words of her song from the heart, but Dolly Parton always knows when she’s ready to fly.

When it comes to the love of her life, however, Dolly Parton remains as devoted to Carl Thomas Dean as the day they spoke wedding vows in 1966.  The musical powerhouse who inherited her plentiful business savvy from her father declined the advice to delay tying the knot, as related in a Hello! Magazine per MSN feature.  The rest is a love story for the ages!

Determination is never in short supply for Dolly Parton.  When the multitalented artist arrived in Nashville in 1964, she knew her creative dreams could come true.  She dedicated herself to working as long and hard as it took to land at the top, and she’s never looked down since.

On the other hand, what the 18-year-old Dolly Parton never expected outside the Wishy-Washy Laundry was the tall, brown-haired, handsome man who looked straight into her eyes.  Then and there, Carl Dean decided “I’m gonna marry that girl.”  Parton was particularly smitten by her beau’s attention to her stories about her life over any physical attributes.  Dean does confess his mental declaration that “Lord, she’s good lookin’,’” but Dolly wasn’t privy to that confession.

After two years of dating, Dolly Parton and Carl Dean set their sights on a wedding.  The executives at Parton’s record label never sent wedding gifts.  In fact, they feared negative career fallout.

“Monument Records and Fred Foster had invested money in me, and building my career,” Dolly Parton explains. “So, they asked me if I’d wait a year to get married.”  The “Here You Come Again” singer understands that true love sometimes can’t wait and doesn’t come again.  She and Carl eloped to Ringgold, Georgia for their Memorial Day ceremony in 1966.

Dolly’s mother, Avie Lee, took the only wedding portrait, with her daughter in a lovely, simple knee-length dress and a short veil.  The bride and groom’s smile already spoke the destiny of a lasting future.  The pastor and his wife were the only other guests. The nuptials never hinder any of the music, films, philanthropy, or literacy projects that Parton undertakes.  On the contrary, the remarkable testament in love between the two inspires admirers all the more.  Consistently, Dolly makes decisions to ensure that her husband is first in her life.  In 2015, Dolly Parton turned down Katy Perry’s invitation to be double- headliners at the Super Bowl because Dean was having health difficulties. Being together in simple, day-to-day ways is a priority in the marriage.

Out of love, Dolly Parton shields her husband from public glare

For six decades, Dolly Parton has led a public life.  The superstar is not alone in feeling marital pressure, either, especially in the 60s.  At the height of the Beatlemania wave, John Lennon got instructions not to divulge his marriage to Cynthia Lennon, or their son, Julian.  The sense of being a hidden family is crushing, especially when so many of the private details of the family came forth a few years later with a divorce after the founding Beatle sought to marry Yoko Ono.

Carl Dean, on the contrary, adamantly prefers his life out of the limelight.  Despite the aspersions from some corners that Dean doesn’t even exist, perhaps Dolly Parton’s deepest expression of love comes in shielding her husband from scrutiny.

“I’ve always tried to keep him out of the spotlight as much as I can,” Dolly Parton asserts.  “He’s like a quiet, reserved person,” Dolly Parton relates in a Country Music Alley feature last October.  She relates how her husband explained, “I didn’t choose this world.” But rather, “I chose you, and you chose this world,” Dean concluded.

The “Pure & Simple” songwriter realizes that her husband loses his cherished privacy and “never get a minute’s peace” after even just a minute in Parton’s high-publicity orb. Dolly is already looking forward to shows again once everyone in the world has the vaccines that Dolly Parton’s generosity helped to provide.  Carl prefers to jam too hard rock, and Dolly’s version of “Stairway to Heaven” is killer.  The love song that most connects her to her husband is “The Last One to Touch Me.” Without a doubt, Carl is in every lyric. The lovebirds both enjoy bluegrass.

Finally, a wedding of Dolly’s dreams and the best of quiet days

In 2016, Dolly Parton and Carl Dean celebrated their 50th anniversary with the renewal of their vows, as O Magazine covered.  For this go-around, Dolly treated herself to a feminine, lacy bridal gown and Carl consented to a few select photographs to be auctioned for children’s charities.  The paving business owner looked dashing in his tuxedo. Anything for Dolly, but he probably got into his jeans and boots in record time after the reception.

Fans may remember that Dolly put her groom on the cover of her 1969 album, My Blue Ridge Mountain Boy. So much for hiding her man away from the world.  At 75 and 78, Dolly Parton and Carl Dean love spending quiet getaways with nature.  Parton grew up surrounded by nature, and her favorite treasure from her husband is a wildflower bouquet and a poem in his own words.  “To me, that’s priceless,” the girl from Sevierville describes.  Dean’s favorite treat is a home-cooked breakfast with bacon, sausage, biscuits, and milk gravy, made as only Dolly does.

“I’m dragging him kicking and screaming into the next 50 years,” Dolly Parton promised her husband.  Indeed, love lasting beyond a half-century is worth a shout, and let’s hope folks can hear Carl (and Dolly) from heaven.