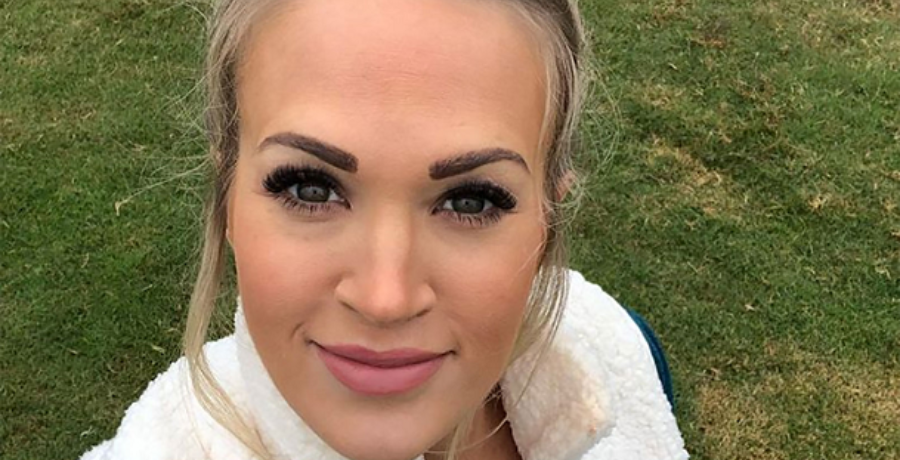 Carrie Underwood showed off her bikini body. The country superstar stripped down to a black-and-white graphic print bikini. The 37-year-old showed off her incredible physique. But she has a lot to celebrate thanks to the sixth anniversary of her CALIA by Carrie clothing brand.

Since then, she has been dedicating herself to a life of health and fitness. Carrie’s brand is the third best-selling brand behind Nike and Under Armour. In 2016, it became one of the hottest lines at Dick’s Sporting Goods. So, she celebrated with a bikini photo.

Carrie Underwood doesn’t often share bikini photos on Instagram. She usually shares photos and videos of herself in workout gear. So this was a special treat for fans. Carrie took to her Instagram Stories to share a mirror selfie. The “Soft and Tenderly” singer shot the photo from inside her walk-in closet.

In the photo, she sported a black-and-white bikini. The bikini top featured a deep V-neckline while the bottoms featured a black band around the middle. She gave her best smile before sharing another photo. According to The Blast, Carrie shared a gym selfie with a caption that promoted her clothing line.

“Whether on the road, on a boat, at a show, at the gym, playing outside, or traveling the world, @caliabycarrie’s got you,” Carrie wrote. “It’s been with me for 6 years and I cannot wait for you all to see what is next! #6thAnniversary #StayThePath.”

Does that mean a swimsuit line is coming? Fans will have to follow Carrie on Instagram to see what’s coming next. She didn’t share a bikini photo for no reason. The songstress probably wanted to give her fans a taste of what’s to come.

Carrie Underwood already has an impressive resume. Not only does she sing country music, but she also sings gospel hymns. Prior to that, she released a Christmas album. She is also a designer thanks to her popular activewear brand.

“Staying active is a lifestyle and a choice we make every day. I created CALIA to make it easier for me and all women to work in working out – no matter what,” she writes on the brand’s website. “We can be the strongest version of ourselves in every facet of our lives. We can give ourselves permission to chose exactly what we need – a workout or a rest day, We can look as beautiful as we feel.”

Currently, the range includes casual dresses, joggers, leggings, sports bras, and sweaters. It also includes accessories such as backpacks, hats, scarves, and socks. On Friday, March 5, the AI alum shared a slideshow of photos to celebrate the six-year anniversary of CALIA. Carrie is looking to expand her line with more goodies.