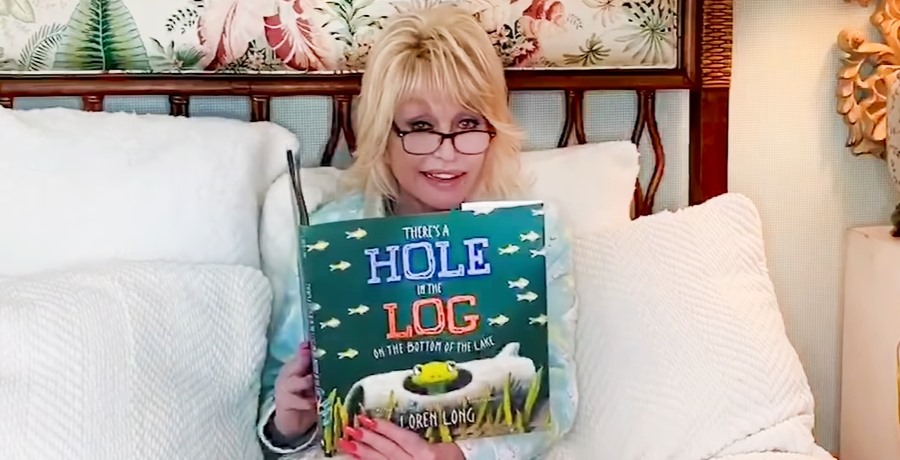 Country music marvel Dolly Parton goes “all-in” in any project she takes on.  From music to movies, to books, and daily inspiration to her millions of followers, Dolly just can’t do anything halfway.  Even funding the Moderna vaccine to the tune of $1 million wasn’t enough for the philanthropic entertainment dynamo.  Dolly Parton took her first shot in front of the world, letting everyone know that the inoculation is safe, painless, and provides the pathway out of the pandemic.  The spirited performer also calls out the “cowards”. And she cautions them to not be “such a chicken squat” in her lovely Tennessee twang.

Statues and trophies never steal Dolly Parton’s heart.  She feels honored to be part of the song, “There Was Jesus” with Zach Williams, noting that the song is more special to the songwriter than “a lot of the others.” She’s grateful to be acknowledged for her 50th Grammy nomination for the collaboration this year.  Still, the effort that gets Dolly Parton gushing with excitement after more than 25 years is her Imagination Library, as noted in a Rolling Stone per MSN feature.

Imagination Library delivers books to the hands in and homes of children up to age 5. The program draws inspiration from Robert Lee Parton, Dolly’s father. Despite being “the smartest man I ever knew,” the stigma attached to illiteracy proved difficult for the diligent parent. He lived to see the initiative started in the Parton hometown of Sevierville stretch across the world.  The Imagination Library now approaches an incredible milestone.

“We just started this in my home county,” Dolly Parton recalls. “If we’re lucky, it might go a couple of counties over,” the generous performer remembers thinking.

By 2004, the Imagination Library went statewide in Tennessee. A national rollout was already in view by 2000, and in 2006, Canada joined the fold. And the UK is coming along the next year.  Today, the literal labor of love and literacy from Dolly Parton, The Dollywood Foundation, and a team of supporters distributes books to 1.8 million children. The children span across the US, Canada, the UK, the Republic of Ireland, and Australia.  Remarkably, in 2010, the groundbreaking personal delivery system straight into the hands of children from their mailboxes brought 25 million books.  As of February 2021, the number is 155 million.

Dolly Parton is petite in stature, but like her talent, her vision is huge.  The living legacy of the Imagination Library is destined to endure far beyond her lifetime.  No child ever forgets “The Book Lady,”– the singer’s favorite title—or the priceless gift of reading.

Dolly Parton certainly seems to be the nearest thing to a living saint these days, even if she doesn’t want a statue, a medal, or even a state hymn.  Despite her wide-open heart, the “I Still Believe” singer can’t find a way to be in every country. It takes legions of dedicated helpers to work through all the logistics.

Astoundingly, the Imagination Library relies on a staff of 15, based in Pigeon Forge, Tennessee.  Jeff Conyers, president of the Dollywood Foundation, oversees the program’s day-to-day operations around the world. A director of marketing and development leads the effort to maintain the Imagination Library mission. Additionally, there is a two-person finance team.  Dolly Parton displays both her head for business and her heart for children in keeping the focus on the initiative’s purpose.

Two executive directors, one based in the US and the other in Edinburg, Scotland, work with five regional directors.  Australia is an example of the Imagination Library’s expansion. 6000 children on the continent receive books now, with their program only launching in 2013. United Way Australia assists in many ways “on the ground” to make deliveries possible.

It takes everybody working together

Technically, Dolly Parton serves as chair of the Dollywood Foundation and “Chief Inspiration Officer”. There’s no doubt about her favorite position, however.  The “Daddy’s Working Boots” songwriter loves to snuggle in bed, reading to children on YouTube, or sharing a story with little ones on her lap.

Dolly Parton understands that there is a lot behind the precious moments from the Imagination Library. Notably, it’s a willing army of 2500 volunteers and community partners that make the program possible.

“The community partners are the secret sauce to the Imagination Library growing and being as successful as it is,” Conyers asserts.

Sometimes, some A-Listers from outside the entertainment world give Dolly Parton’s passion a boost.  Gov. Mike DeWine of Ohio and his wife, Fran, are not just their state’s First Family, they are grandparents.  The pair saw firsthand the joy sparked in children with the arrival of a new book every month. This is addressed personally to the child with a letter from Dolly Parton.  Fran DeWine visits each of Ohio’s 88 counties to promote the Imagination Library with state grants and community fund-raising involvement.  Parton never lacks enthusiastic cheerleaders.  Children sounding out words and delightfully turning pages are the best representatives of the Imagination Library.

Not just any book will do for Dolly Parton

Dolly Parton often reflects that she didn’t have children of her own so that she could be the mother to the world’s children.  With the vaccine and the Imagination Library, that statement of purpose becomes a reality.

Along with her readings for children from the collection, Parton has penned I Am a Rainbow and the young readers’ version of Coat of Many Colors in book form. She includes a spoken-word rendition of the personal story song in her 2017 children’s album, I Believe in You.  Dolly Parton attests to the rigorous process for selecting books for the Imagination Library.

A panel of experts convenes annually to select approximately 21 to 25% of the Imagination Library books to be changed annually.  Early childhood experts, teachers, authors, and librarians give input, and each member reads each book under consideration.  Fans likely find it surprising that the DreamMore Resort at Dollywood hosts this vital, multi-day gathering, but attendees are hardly on a vacation.  Parent input is another important component for selection, and children’s real-life experience and culture from their environments must be reflected in the literary selections.  Titles by Dolly Parton don’t receive preferential treatment. Audiobooks and Braille selections are available since 2011 from the initiative.  Great care is taken regarding diversity and family composition, to allow children to see themselves in the pages.

“Of all the things I’ve done in my life, this is one of the most precious things,” Parton ponders in the 25th anniversary Facebook celebration, The Library That Dolly Built. The living legend, spirit-led philanthropist, and the star insists that “if you’re lucky and fortunate enough to be in a position to help, you should help.”

Leaving millions of lives healthy and vaccinated, along with millions of lifelong readers, is a legacy of love left by Dolly Parton.

Stay connected with Country Music Alley for news on the latest good deeds and good music happening in the country music world.