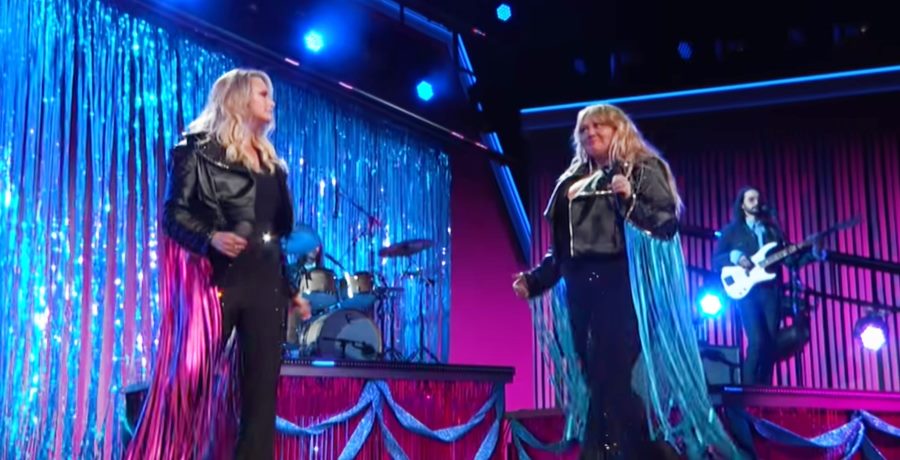 More than any night of celebration in Country music, the ACM Awards are famous for putting performances at the forefront.  2021 is a year of a global public health crisis and an outcry for social justice like no other. Notably, this year’s ACM Awards festivities embraced inclusion, faith, and friendship. Also, the festivities bring feelings that only country music evokes for example, from the opening minute to the last.

Mickey Guyton and Keith Urban comfortably assumed their roles as history-making co-hosts.  The “Blue Ain’t Your Color” favorite took on the task before. Mickey Guyton is the first host of color to emcee the prestigious evening. The Grammy-nominated “Black Like Me” artist graciously fulfilled the first-time duty.  She also gives heartfelt shout-outs to performers and “her girls,” Texas sisters, Maren Morris and Miranda Lambert.  Miranda made sure that the opening number with Elle King made a splash.

Their fringy, shiny, pink and blue, and black-sequined romp on “Drunk (And I Don’t Wanna Go Home) ” definitely isn’t the typical ACM Awards opener as MSN per People notes.  In many ways, nothing about this night was status quo, for good reason.  It was a night to celebrate with friends, go to church, and throw the doors open as wide as the world.

Diversity and doing things right at the ACM Awards

Despite never singing the song together before, and King managing the throes of pregnancy, she and Miranda Lambert delight that they “nailed it.” When it comes to creative diversity, Lambert is an ACM Awards standout.  She joins Chris Stapleton at the landmark Bluebird Café. Together they sing a beloved canine tribute, ”Maggie’s Song”. Lambert presents her most poignant side alongside Jack Ingram and Jon Randall. They perform “In His Arms” from The Marfa Tapes, as in Texas.

It’s tough to convey unity at a six-foot distance.  Still, nothing personifies true harmony and support like seeing Brothers Osborne onstage proclaiming “I’m Not For Everyone” completely at ease as part of the LGBTQ-IA community after T.J.’s “coming out.” John Osborne gets courageously candid concerning his mental health struggles and learning “self-love” and the support of family in the process of healing, as he relates with CBS News.  It’s not by accident that the siblings took the stage to close the ACM Awards with “Dead Man’s Curve,” personifying the power of living an authentic life and basking in the support of country music friends.

Buddies count as brothers, too

Next to enticing his daughter, Kingsley’s, giggles, Kane Brown never smiles so big as he does during his duet on “Famous Friends” with Chris Young.  The Everyman ballad serves as the perfect honor to the frontline workers sitting in the audience at this ACM Awards celebration.  A shoulder touch speaks as loud as the approving applause.

Good-time guy fun was the order business for Best New Male Artist, Jimmie Allen. Apparently, he was flying solo for “Freedom Was a Highway” before Brad Paisley surprises him by showing up.  Among the most moving musical statements of the night is Dierks Bentley’s beautiful sonic repartee with The War & Treaty on U2’s timeless “Pride (In The Name of Love).”

The performance was set at the Station Inn, the ground floor of bluegrass in Nashville.  It is impossible to feel the heart and soul of Country roots without consuming gratitude to the first Black Americans who gave birth to the genre by bringing banjos.  Banjos need no amplification.  A ringing banjo carries for miles. Dierks Bentley recorded “Pride (In The Name of Love)” 10 years ago.  It’s about time he celebrated the song and all its meaning with collaborators who know it to their core.

Carrie Underwood seems omnipresent in her conversation of the timing regarding her gospel album, “My Savior,” so the timing of her ACM Awards performance had to come by divine providence.  Her choice to open with “Amazing Grace” harkens to the very beginnings of country music and its Mother Church.  The lead-in to “Great Is Thy Faithfulness” is already immaculate before CeCe Winans enters side-stage to deliver likely the most powerful Gospel duet set in award show history.

To a nonbeliever, it appears somewhat like competition or theatrics, but listeners of faith sense the medley as an offering to God, one like in the sermon days of the Ryman.  By the time Winans and Underwood reached the final note of “The Old Rugged Cross,” complemented by a resonant choir, the rafters raised, leaving Carrie to close with “How Great Thou Art” on her own, and the most uproarious applause of the night.

Country music makes room for everyone, and it was somehow poetically fitting that Eric Church followed the reverence with “Bunch of Nothing.”  Country music consistently embraces the truly sublime and the sublimely ridiculous, especially involving human emotions.  Whether the connection is intentional or not, it is perfect ACM Awards billing.

Another ACM Awards moment for Mickey

Mickey Guyton embodies her own strong sense of faith and even remembers the road to church from her childhood and youth with her siblings and parents.   After dressing in an array of vibrant colors that Guyton likened to Diana Ross and the Supremes in their heyday, the “Heaven Down Here” songwriter dons vivid blue to bring her own anthem of hope, “Hold On.” The affirming track is part of the 2019 Breakthrough soundtrack and celebrates another breakthrough of its own on Mickey’s debut album this summer.

“Hold On” started as a prayer for Mickey Guyton, as the artist describes.  The year 2021 is an answer to many of her prayers, including the blessing of motherhood.  While no earthly success compares to the eternal joy of bringing life into the world, Mickey invests her heart and soul into her craft for more than a decade before being heard or considered.  She’s not going to waste any second of her future.  “I’ll be your hope,” one lyric echoes.  Mickey Guyton hopes that the “beautiful genre” of country music looks a lot more like her and a rainbow of other colors and styles in the future.  This change has to last for more than a season.

What everyone wants most

Keith Urban’s exuberant offering of “Tumbleweed” clearly takes the prize of the night for coming closest to the concert experience we all know and love.  It was refreshing to see his blonde hair bounce along with his body.  It’s easy to imagine the usual roar of an arena crowd.

Ashley McBryde allows herself to be carried off in the same spirit on “Martha Divine,” and no one escapes the warm feeling from seeing favorite icons like Alan Jackson, Martina McBride, and Dolly Parton, even on video.  Whether young or “of a certain age,” every country music performer craves a real crowd, in a real honky-tonk or arena.  The gratitude from an audience is titanium to anyone with talent.

Only fools attempt to predict the future, but let’s hope that by next year, every couple can cozy up as close as Maren Morris and Ryan Hurd for “Chasing After You,” and that chasing after tickets and the treat of truly live music returns to reality.

Miranda Lambert Voted One Of Most Influential People 2022
Maren Morris’ Tour Bus Is Far From Humble
Keith Urban Relies On Marital Devotion For Sobriety?
Jimmie Allen Puts The APB Out On ‘On My Way’ With Jennifer Lopez
Kelly Clarkson Listens To Fans & Delivers — Here’s How