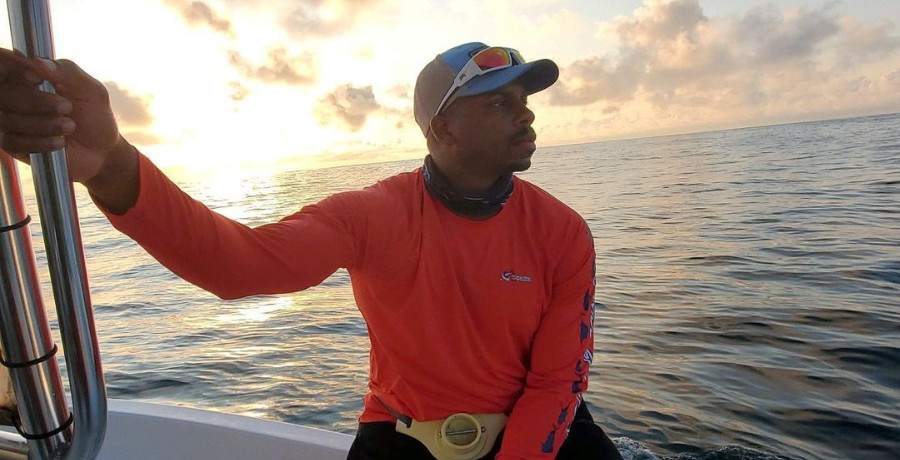 No one calls country music original Jimmie Allen lazy.   The ACM Award winner as New Male Artist of the Year for 2021 barely takes a minute to catch his breath between projects.  Already this year, the “Best Shot” artist collaborated with a stellar lineup of stars across genres to create The Bettie James Gold Edition.  Little Big Town, Babyface, Keith Urban, Breland, and Tim McGraw are just a few of the collaborators who never wasted one second in saying yes to Jimmie Allen on one of the most thoughtful and listenable collections in recent memory.

Likewise, Brad Paisley is another collaborator and friend of Jimmie Allen who stepped up and certainly stands out in the collaborative collection.   “Freedom Was a Highway” was truly a song of the summer, and the partners played it everywhere, along with the millions of spins on country radio.  Paisley and Allen show off their acting chops in their theatrical-version video for the tune.

Coincidentally, Allen is fresh off hosting his sellout hometown concert in Milton, Delaware, in support of the album and the artist’s success.  American Songwriter delves into the connection shared by the creative duo, while People provides a glimpse of how Jimmie Allen and his wife, Alexis, blend balancing family, awaiting the arrival of another daughter, and the demands of daddy’s busy schedule. In more ways than one, this father has a thing for princesses.

Surprisingly, Jimmie Allen is surprised that audiences “are as into it as they’re starting to show they are” when it comes to “Freedom Was a Highway.”  For the artist, the song co-written with Ash Bowers and Matt Rogers harkens back to the days “before I had my license” just after learning to drive in his hometown.  The “love was a girl next door” lyric is fully autobiographical, too.  “I was serious about my first crush,” Allen confirms.

No doubt, Jimmie Allen has a way with a song.  Although Brad Paisley spent his growing years in West Virginia, he completely embraces the sense of freedom in the wide-open ballad.  Allen set out to create “something that felt like home to me, and I just went with it.” Clearly, Paisley relates to the same youthful spirit that the song encapsulates.  The “American Saturday Night” singer says he was “honored when he asked me to join” in the collaboration.  With a wink, Paisley teases how “when I come in, I try to pick my best not to mess up Jimmie’s song.”

For his part, Jimmie Allen offers that Brad Paisley truly “brought the freedom to the highway” with his soaring solo.  He declares “the magic” of Paisley’s playing and participation, relating how “humbled” he feels to have such willing artistry.  The admiration goes both ways.  “I’m a fan of Jimmie, not only as a musician but as a person,” Brad praises.  Assuredly, the camaraderie comes through loud and clear, and fans can’t get enough of the good vibes.

Just last month, Jimmie Allen performed a precious impersonation of his 17-month-old daughter, Naomi, doing her best pout on The Sam Alex Show for Taste of Country Nights.  During the radio visit, the exuberant expectant dad was still adjusting to the news of having another daughter with his newlywed bride, Alexis Gale.  Initially, like many parents, the couple “thought” a boy was on the way.  Divine providence, however, always has a way of charting a course different than mere human minds.

Now, Jimmie Allen and a glowing Lexi, along with a toddler, Naomi, and big brother, Aadyn, 7, (from Allen’s previous relationship) excitedly plan for the next little sister’s arrival and “like 9 more years of Disney princesses,” the father assures.  His feminine side seems fully engaged.  “I’m obsessed with Disney World,” Allen declares.  “I’ve always wanted to go inside a Bibbidi-Bobbidi Boutique.”

What better reason than having two little girls gives Jimmie Allen such privileged access.  Children grow up in a flash so now is the time to savor childhood fantasies.  Jimmie proposed to Alexis at Disney World in 2019, but wedding plans got postponed due to pandemic restrictions.  During the People sit-down, the couple reveals that they quietly wed in 2020, before an intimate ceremony in May of this year in Pennsylvania.

“I wanted to be a dad and do music– that’s it,” Jimmie Allen confesses. The “Make Me Want To” artist asserts that “I never wanted to get married.”  From the time Allen met his future wife at his cousin’s house, though, his perspective took a major shift.  “Alexis changed that,” the husband confirms.

Allen was smitten with the nurse from his hometown who appeared so “mature and put together,” not to mention “kind and sweet.”  Straight from work in her scrubs, Alexis’ inner beauty drew Jimmie Allen like no one before. As fate would have it, confirmation came from some of his late father’s last words.  Lexi came to meet Mr. Allen, senior, at the hospital.  His impression was more than affirmative.

In vivid detail, Jimmie Allen recalls his own father’s admonition that the son had a past of mess-ups in relationships. “Don’t let this one go!” the parent cautioned. Jimmie pledged that he wouldn’t and the rest is history– a new family creating their own history!

“I have so much love for him, so much respect,” Lexi assures her husband. The bride still has her newlywed glow as she confirms “I admire who he is to me and to everybody around him.” The busy mother admits she’s learning on the job with a school-ager, a toddler, and soon-to-be a newborn baby.  While her husband playfully teases “another one, and another one, and another one after that,” Lexi insists that a pause in family expansion is in order.  “I like to dream,” Jimmie Allen retorts with a smile.

Make room on the calendar

That circle of love includes his kids, who inspired him to write his children’s book, My Voice Is a Trumpet, adding credits as an author to his extensive resume. Jimmie Allen aims to give children the confidence to not only speak up for themselves but to speak up in support of others just as fervently.

Jimmie Allen never runs short on positivity and certainly juggles a lot of professional ventures all at once.  Still, somehow, this husband, father, and rising star in country music surely makes space on his calendar for sipping tea with all his princesses—and a handsome young prince, too.

Keep Country Music Alley close to your calendar for all the news and highlights on the music and the stars you love!