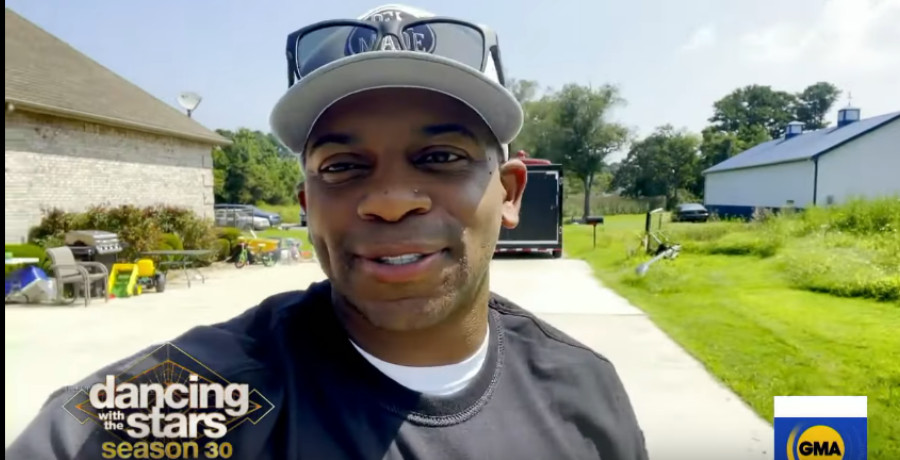 His fans know full well that Jimmie Allen does it all.  This morning, the 2021 ACM New Male Artist of the Year added another feather to his artistic cap.  At last, the “Best Shot” singer confirms the rumors are true! He’s part of the Season 30 cast of Dancing with the Stars and he caps off the big news with a buoyant performance to signal a very special season.

GMA saves Jimmie Allen for the Season 30 cherry on top

Everyone knows the old adage of saving the best for last, and Good Morning America knows how to tease the ABC premiere talent franchise better than any other outlet.  For weeks, diehard DWTS faithful got wind that Olympic gold gymnast, Suni Lee, and social media celebrity (whose profile dubs her as ‘American dancer,’ by the way) JoJo Siwa, were lock-ins for the milestone season.  Only whispers of Jimmie Allen floated in the breeze.

This morning, however, they hung onto Jimmie Allen as the final Season 30 contestant like the birthday cake at the party.  Fittingly, the “Freedom Was a Highway” artist shows off some moves and offers a performance that makes the Disney setting shimmer like the candles.

Despite the darkness of the very early hour in Disneyland, Jimmie Allen brings the spirit of a full marching band to “Good Times Roll,” from his Bettie James Gold Edition album, featuring collaborations with luminaries in country music and across musical genres.  His full band was absent, but Jimmie Allen certainly had a cheering section.  Real Housewives of Atlanta star and castmate, Kenya, raised her arms and swirled in support.  Furthermore, Peloton coach, Cody Rigsby, actor Brian Austin Green, and NBA star Iman Shumpert put their moves against Jimmy Allen’s in the competition, among others, as Taste of Country verifies.

Although Jimmie Allen teases to Robin Roberts that his jeans are looser than his muscles during these “rough” dance workouts, the “Livin’ Man” singer-songwriter demonstrates far more swivel in the hips than Olivia Jade, who shuffles her feet once.  “Good Times Roll” also gives shout-outs to Mississippi, Alabama, and Louisiana in its references.

As far as good living goes, Jimmie Allen goes along with Magic Kingdom just fine.  “So why not give all my money to the Mouse?” Allen playfully inquires.  His proposal to his wife, Alexis Gale, was a Disney dream.   The couple’s gender reveal celebrations happen there, too, adding to a significant tally.  “I’ve probably gone 70 times since 2012,” Jimmie Allen affirms.

Now, the exuberant dad and mom expect their second daughter in November. It’s no surprise that Jimmie Allen declares that he’s always wanted to go inside a Bibbidi-Bobbidi Boutique at Disney.  As it happens, he plans for at least another decade of Disney Princess parties!  This parent is likely to go deep in the DWTS competition with his personality, humor, and passion for giving his best, so more Disney parties are a definite possibility!

Forgiveness is for the giver, reminds Jimmie

Conscientiously, Jimmie Allen is more than a force for unity, positivity, and inclusion in music.  In turn, he supports the same objectives in life.  Country Music Alley followers recall that the constantly current artist was one of the first to reach out to Morgan Wallen following the abominable racial slur caught on video.  Just as a deliberate effort in awareness, education, empathy, and understanding yields to breakthroughs, Jimmie Allen verifies that “forgiveness is not about the other person– it’s about you,” the artist relates in KFDI’s Country Music Minute.

“It’s so you can get that weight off of you, and progress” Jimmie Allen further collaborates. The remarks follow the artist’s comments esteeming Walt Disney. Allen particularly admires Disney’s determination to believe in his dreams despite having very little money.  “The only way to get through stuff is to go through it, and nobody wants to go through the hard stuff, but that’s what it takes.” Jimmie asserts.  All the pain and dirt have to come out before truth and reconciliation.

From dialogue to the dance floor

Speaking of reconciliation, fans who saw Luke Combs introduce Jimmie Allen at CMA Summer Jam saw the process in action.  Early in 2021, Combs owned up to his own wrongful racial affiliations and behavior, noting that country music could do better.   Last week, Luke paid respect to Jimmie as “a guy who’s made a huge impact in  country music the last couple years.” The two shared a warm embrace before Combs left the stage.  Nothing can compensate for centuries of inhumanity or an industry endorsing the wrong side of history, but a hug is a good opener to a conversation and listening.

Just think what Jimmie Allen can do on the dance floor to start the dialogue!  Can’t wait for the foxtrot!  Season 30 premieres September 20 on ABC at 8 PM ET.

Are you excited to see Jimmie Allen on Dancing with the Stars?   Leave us your comments and keep tuned into Country Music Alley for all the latest updates on your favorite artists and their news!