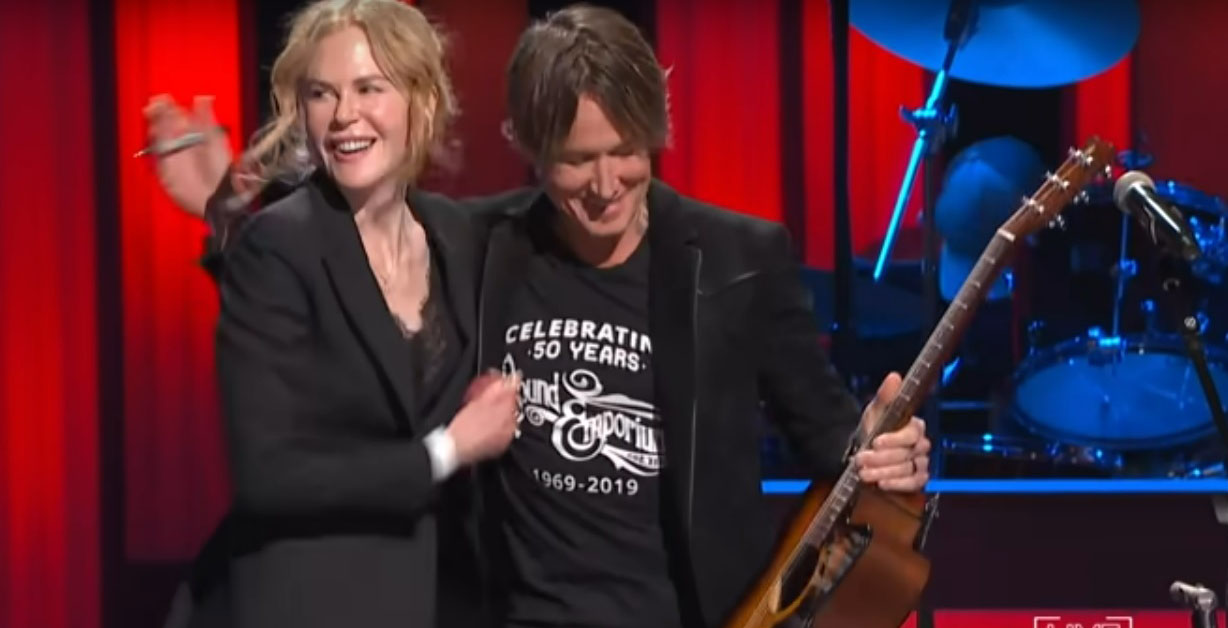 Even though Keith Urban typically prefers his tailored T-shirts to suit and tie attire, faithful fans know how the multitalented artist wears his heart on his sleeve.  Consistently, the “Wild Hearts” singer-songwriter is never shy about showing his passion or devotion to his wife, Nicole Kidman.  Likewise, in line with most of his contemporaries in the country music world, Keith Urban holds Loretta Lynn in the highest esteem.  His heartfelt rendition of the Country queen’s “Blue Kentucky Girl” moved Loretta to tears at her birthday celebration two years ago.

Bearing that in mind, it’s no surprise at all how Keith Urban steps up to join the roster of stellar performers assembled as “Loretta Lynn’s Friends” for her Hometown Rising benefit show, as Country Music Alley notes earlier this month.  As it turns out, Keith joins a crew of all A-List luminaries, including Garth Brooks and Trisha Yearwood, Little Big Town, Luke Bryan, Luke Combs, and Chris Janson.  Keith’s “Out the Cage” collaborator, Breland, and remarkable singer-songwriter, Brittney Spencer took the stage, too.  To everyone’s surprise at the sold-out show at the Grand Ole Opry, Reba McEntire wasn’t the only red-haired looker, as Taste of Country and the Daily Mail confirm.  At Keith Urban’s call, Nicole Kidman comes out to sign rather than sing, showing big love to her hubby and Music City.

A time of personal toll for Loretta Lynn and Keith Urban

Keith Urban eloquently and matter-of-factly spoke that country music “is about family and community” amidst the cries for more diversity and inclusion across the genre that owes its roots to people of color who brought banjos to ring out with song.  For his part, Urban consistently advocates that country music has room for everyone at the table.  In the wake of Hurricane Ida’s flooding across Louisiana, Tennessee, and up through the Northeast, the need everywhere hits home.  Both Loretta Lynn and Keith Urban hurt from loss in recent weeks.

Although Loretta Lynn never took the stage in person, her personal devastation was palpable from her video clip.  She lovingly extols the long-time property supervisor at her Hurricane Mills, TN ranch, Wayne Spears.  The faithful steward was swept away by the floodwaters raging in Humphreys County as he tried to save a piece of equipment.  Spears was one of the 20 lives lost in the disaster, not including the immense property damage.

In the country music family, bonds go far beyond blood ties.  Keith Urban mourns his own loss, the death of revered production manager, Randy “Baja” Fletcher.  The revered 72-year-old was a beloved right-hand man to Brooks & Dunn, ZZ Top, and many other artists, including Urban.  Fletcher fell from the stage in Ohio while preparing for Keith Urban’s Bash on the Bay on August 26 and passed the next day.  “I loved him.  We all loved him,” Keith Urban reiterated in his statement on Billboard, noting how “blessed” he felt that Randy chose him and his production team as his road family for 10 years.

Almost instantaneously, the lineup of star performers for Hometown Rising swelled in answer to queen Loretta’s call.  Apparently, Keith Urban loves spontaneity, too.  Right after closing his energetic, three-song set with “Lean On Me,” along with Breland, the ever-generous musician takes his guitar off his back, signs it, and passes it to Breland for his official signature.  Notably, Keith doesn’t stop there.  “If I could just get my wife to put her autograph on here,” the husband calls, seeing that a stunning Oscar-winner lends even more auction value to the instrument.   In a nanosecond, Nicole Kidman strolls casually out to Keith, cozying up to him with a hug and touches on the cheek.

Keith Urban happily plays holder while Nicole inscribes her name on the guitar that fetches $75,000.  Kidman got showers of audience cheers and clearly savored her Grand Ole Opry stay, however brief.  “I’ve never been on this stage at the Opry—WOW!” the actress, mom, and UN ambassador exclaims, delightfully raising her fists in joy.

Not the first flood damage for Keith Urban

Again and again, Music City and the state of Tennessee rise from seemingly insurmountable crises.  Bombings, blazing wildfires in the Smoky Mountains and likely more floods than anyone can count are just some of the calamities that surge against country music’s homeplace.  Nonetheless, nothing manages to break the spirit or resolve of the residents—everyday, hard-working folks.  They know that determination and music together can do anything.

Intrinsically, Keith Urban knows that to his core.  Fans and the artist himself recall the Nashville floods from 2010.  At the time, the “Blue Ain’t Your Color” artist was in the middle of an album when “about 50 guitars went under several feet of water.”  Then, as now, Keith Urban considers his own loss as nothing compared to those who have lost homes and virtually everything material.

Without a doubt, Keith Urban knows the history of Hometown Rising and rising again, all around him.  He, Loretta Lynn, Nicole, and an army of love from country music are determined to rebound again!

Stay in tune with Country Music Alley for the latest on the music makers who are making things happen!