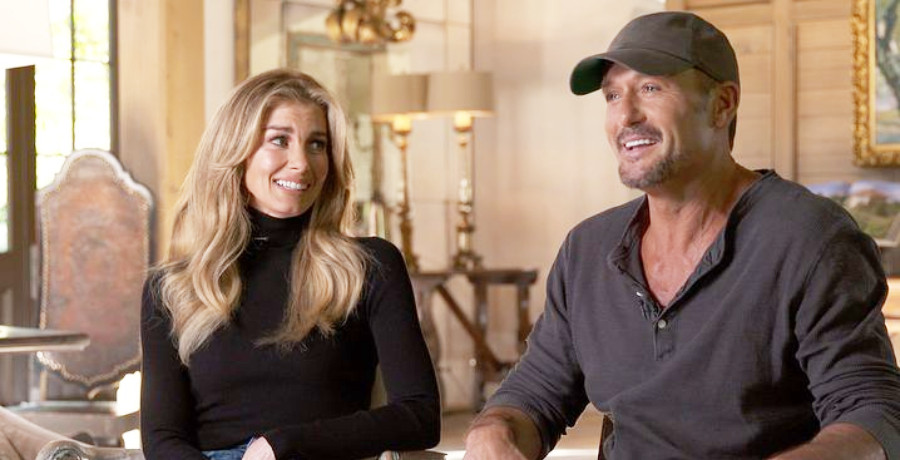 In these times, even the concept of a silver anniversary seems like a foreign entity in the entertainment world, much less in country music, where heartbreak songs far outnumber the blissful choruses proclaiming “three chords and the truth.” Harlan Howard had the prescription for a solid Country song, but Faith Hill and Tim McGraw surely have the secret for a solid commitment.  This week, a celebration is in order as the country music royal couple celebrate their 25th anniversary, as Yahoo News per Today and Hello! Magazine note.

Naturally, their legions of adoring fans feel overjoyed in celebrating with Tim McGraw and Faith Hill.  In a very real sense, the fans witnessed the sparks of passion ignite from front row seats on the Spontaneous Combustion tour back in 1996.  What loyal fans didn’t see, however, was that chemistry and a flicker of fire alone never sold Faith Hill on forever with Tim.  She wanted to see some planning and persistence from Tim McGraw.  Ultimately, he delivered and Faith surrendered to love.  That love proved to be the love of a lifetime, and Tim McGraw and Faith Hill understand what it is to forge an enduring legacy.

Once is not enough for Faith Hill

Although Tim McGraw never discloses the precise location (which he most assuredly knows) apart from being “somewhere” at an outdoor festival in his intimate video share of the memory, the “It’s Your Love” superstar vividly recalls his future bride’s reaction to yet another proposal.

“We had been dating for a while,” Tim McGraw divulges.  Already, the performer reveals, he had asked Faith Hill to marry him “quite a few times.”  From her perspective,  though, the “Mississippi Girl” singer viewed involvement with another singer dimly, having been married to Daniel Hill for what she thought would be her “one time.” Careers and lifetime companionship are frequently incompatible in the industry.  Understandably, Faith Hill concludes “it’s just not gonna work out.”  Nonetheless, Tim McGraw persisted– one more time.

Just before taking the stage, Tim McGraw proposes, literally, “Let’s get married.”  This time, Faith Hill responds incredulously, questioning how “You’re asking me to marry you as a country music festival in a trailer house?” While Tim deems the setting “pretty apropos, if you think about it,” Faith asks “Are you serious?” standing in front of McGraw’s open case with a large mirror.  Clearly, Tim McGraw communicated serious intentions, and this time, all the noise of life didn’t matter.

She wrote it in red

In this case, true love doesn’t wait long.  Coming off stage, Tim McGraw dashes for his dressing room and finds the words he’s longed for written in red across the mirror of his open case.

“Yes, I’m gonna be your wife,” reads the inscription from Faith in red lipstick.  The song says it all—“a heart don’t forget somethin’ like that.” As parents, partners, and soulmates, this couple stands.  Shortly after exchanging vows, the McGraws chisel out detailed specifics of how they will navigate their surging careers and staying devoted and “present” parents for their children.   Through their growing years, Gracie, 24, Maggie, 23, and Audrey, 19, traveled with mom and dad.  At basketball games and PTA meetings, there were no greetings of prominence, only Mr. and Mrs. McGraw.

Through life, tests and trials assail every union, and Tim McGraw and Faith Hill consistently stick with candor in their recollections through the years.  In a recent raw and viscerally honest reflection noted by Country Music Alley, McGraw extols and honors his wife as never before and in her response to his confession and confrontation regarding his drinking.  “She just grabbed me and hugged me and changed my life,” Tim McGraw credits in immaculate simplicity.

For her 25th anniversary response,  Faith Hill offers a tender metaphor, displaying herself on a Jeep, wearing the jeans she wore in Tim McGraw’s 2014 video for “Meanwhile Back At Mama’s.”  She describes how the jeans ripped recently while she was dancing. No thought of discarding the clothing keepsake enters her mind.  On the contrary, she asserts “I’m gonna keep them.” Furthermore, Hill assures “I’m gonna make it work, get them fixed.”  The “Breathe” singer also explains that she’s had the red boots since the seventh grade.

Wear and tear never daunt Faith Hill in the least.  Her words assure the “good times, bad times” and all the ones in between.  “Sometimes, you’re gonna look your best, and sometimes, you’re not,” the artist mom declares.  In conclusion, she states “It’s all about love. Period. And respect.”

Pride gleams through the words as Faith Hill celebrates “three beautiful, smart, crazy-funny daughters with this man.”  “I love you so much, baby,” she addresses Tim McGraw.  “Twenty-five years—wow.”

In truth, the greatest symbols of love don’t need to shine like silver.  Old boots and jeans work fine with effort and love, too.  Country Music Alley congratulates Tim McGraw and Faith Hill on their milestone 25th anniversary!

Kelly Clarkson Listens To Fans & Delivers — Here’s How
Carrie Underwood Hearkens Back To Signature Style On New Tune
Jimmie Allen Puts The APB Out On ‘On My Way’ With Jennifer Lopez
Keith Urban Relies On Marital Devotion For Sobriety?
Maren Morris’ Tour Bus Is Far From Humble