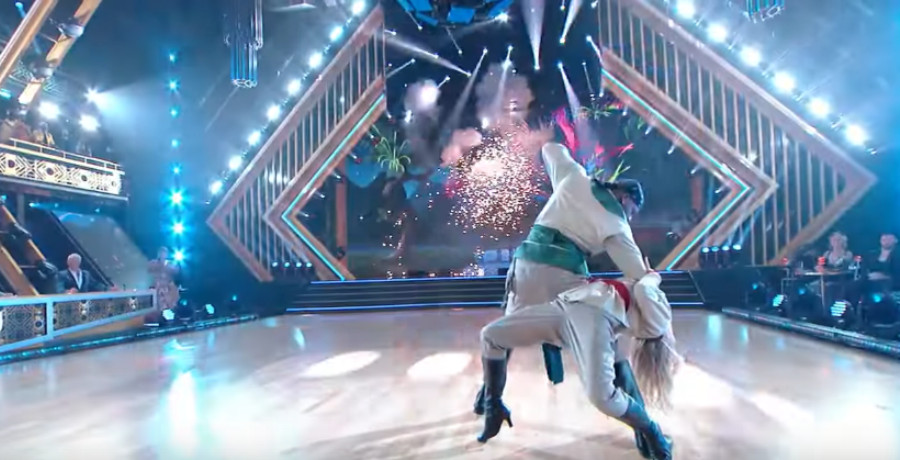 Without a doubt, platinum country music artist Jimmie Allen is making the most of his Dancing with the Stars experience in Season 30.  On top of the effort, work ethic, and intensity the singer-songwriter pours into every performance with his pro-champion partner, Emma Slater, Jimmie Allen’s affection for all things Disney goes to another level.  In some way, nearly every momentous event of his life connects with the venue built on dreams.

From his proposal to his wife, Lexi, to gender reveal celebrations, Disney features large for this family.  It’s no wonder why Disney Heroes night provides an added fire of inspiration for Jimmie Allen.  The pair’s Paso Doble puts the contenders in the upper rung of the competition by the end of the night and certainly does Mickey Mouse proud!

Extra elements are no sweat for Jimmie and Emma

In honor of this Disney Heroes celebration, DWTS decided to add extra elements to create Mickey’s Dance Challenge.  Naturally, they call on the beloved character himself to conjure the moves.  One includes an under-the-knee clap, and the other involves a tweak of the ears, both announced by extended arms.

As in every week thus far in the season, Jimmie Allen offers a true-life, heart-tugging tale from his life.  In this instance, the “Home Sweet Hometown” singer from Delaware details that his dad, James Earl Allen, gave his namesake son examples of service and sacrifice as “a military man.”  The senior Allen suffered kidney failure and was unresponsive in the end-stage.  In a tender recollection, Jimmie chooses to celebrate his father’s life by going to their favorite fishing spot.   “Get it done” was the mantra for Jimmie Allen’s father.  In all regards, from his devotion as a parent to performing and benefit causes, Jimmie Allen takes those simple three words to heart.

Early on in their routine, Jimmie Allen and Emma nail the Mickey moves like they were a natural part of the military drill from Mulan.  It’s one thing to learn the Paso Doble– it’s another to seamlessly incorporate a cartoon character’s suggestions into the seamless flow of a DWTS performance.  All praise to Jimmie Allen for the mentality to drill, drill, drill, and to Emma for incredible choreography.  Every judge proclaimed the couple performed the elements best for the night, and they stuck to the judgment.  The pair swept the dance challenge!  The extra points put them in the top four.

Beyond pleasing Mickey and the panel in the challenge, clearly, a more confident, seasoned Jimmie Allen took the dance floor for Week 4 with “I’ll Make a Man Out of You.”  Accordingly, the partners performed as equals in gearing up for the battle of the Disney classic.  Just like on stage, however, Jimmie is gaining his swagger.  The judges noted the difference.

Carrie Ann Inaba offers two thumbs up high in the air the second the dance ends.  She calls the performance “delicious” and scores it an 8.  The persnickety but precious Len Goodman credits Jimmie Allen for exhibiting “the Paso Doble feeling” throughout, and again praised the incorporation of the challenge elements.  Derek Hough mentions the “texture” that Jimmie Allen adds to his presence and performance.  He scores another 8.  Together, the score comes to 30, before the inclusion of the challenge points, as Taste of Country notes. Bruno Tonioli loves how Jimmie Allen sings the full song while watching every step.  After all, the judge is the performer on the panel!

As it happens, Jimmie Allen isn’t the only dad with two beautiful daughters (including one on the way and due any minute) on this season of DWTS.  NBA star Iman Shumpert also has two darling daughters at home.  While no one argues that fatherhood is a competition, Shumpert shared his story of daddy coming through in a way that most papa’s never have to.  Remarkably, Shumpert delivered each of his daughters, who came in such a hurry there was no time for any drive to a hospital.

Providing his 911 call to a dispatcher following one delivery, Shumpert proclaims he’s got “the best hands in the business,” and what a rare blessing to hold your own baby straight from the womb.  One of the loveliest scenes from DWTS came when the cameras showed Jimmie Allen cheering Iman’s dance at the top of his lungs.  Good hands are always nice, but a father’s heart is his most precious asset.  With all his heart, Jimmie Allen hopes his baby daughter arrives while he is on DWTS.

Glowingly, daddy Jimmie Allen assures “She’s special– she’s a star” and her welcome to the world deserves a national debut, with Jimmie coaching mom through delivery, per face time.  Now, that makes for a story that millions of fans, or her father, can never forget.

The noblest news of all is that no one went home on Disney Heroes night, but beware, Tuesday’s Disney Villains vote cuts may come with a vengeance!

Country Music Alley follows Jimmie Allen’s DWTS journey week by week.  Be sure to check back for the latest updates on Jimmie and all your favorite country music makers!

Blake Shelton Headlines 2 Major Events, See What
Jimmie Allen Puts The APB Out On ‘On My Way’ With Jennifer Lopez
Kelly Clarkson Listens To Fans & Delivers — Here’s How
Keith Urban Relies On Marital Devotion For Sobriety?
Carrie Underwood Hearkens Back To Signature Style On New Tune