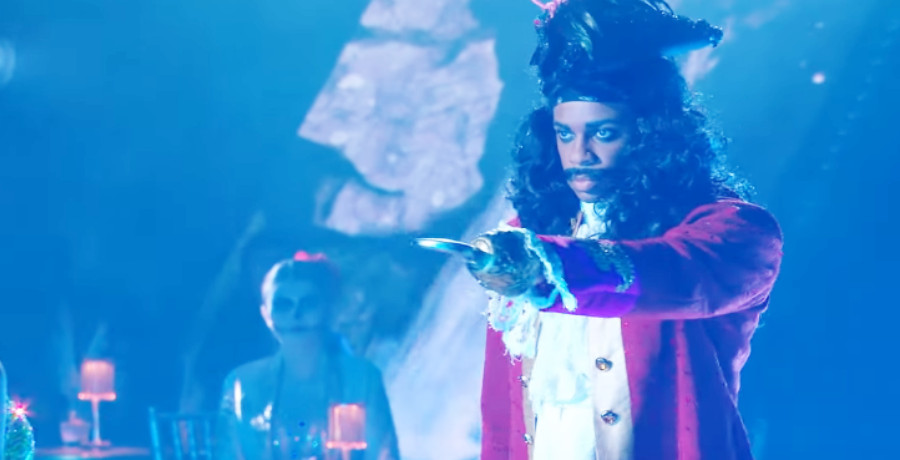 His devoted country music fans fully vouch for the fact that Jimmie Allen is the farthest thing imaginable from a villain. The huge-hearted artist displays his broad smile and generous spirit as easily as breathing.  Nonetheless, when it comes to portraying any Disney character, Jimmie Allen is an expert.  The devoted dad to son, Aadyn, 7, and 16-month-old toddler, Naomi, considers himself an expert on Disney princesses.  Jimmie and his wife, Alexis, are set to welcome their second baby daughter any minute, too.

In the words of Carrie Ann Inaba, Jimmie Allen and Emma Slater delivered a “delicious” Paso Doble performance from the heroic, girl-powered classic, Mulan, on Monday night’s DWTS.  Hands down, the judges hand the coveted, first-ever Mickey’s Dance Challenge points to the two.  On Tuesday, turning the tables, Jimmie Allen revs up more than ever to portray Captain Hook from Peter Pan, opposite Emma’s perfectly precocious and precious Tinkerbell.   If they thought Monday night’s outcome was an ending from a Disney movie, Tuesday took them to the stratosphere!

Suddenly, Jimmie Allen is born to be a bad guy

“I’ve been like, 80 times (to Disney venues),”  Jimmie Allen declares to Emma during their short time of wonder before dance practice resumes.  He’s got the pictures to prove the numbers, showing himself with his family celebrating special days at Disney.

“I love Peter Pan!” the “Make Me Want To” singer exclaims.  For certain, nobody had to force Jimmie Allen to don the costumes of Captain Hook.  “He’s a fashion icon,” says the artist who wears his Stetson with unmistakable flair.

From the instant the first beats of “bad guy” by Billie Eilish sound, anyone watching had to think that Jimmie Allen and his uber-talented teacher had weeks to get prepared for the wicked good number, not mere days.   While jazz dance is more free-form, like the music genre, in some aspects, the moves and the story of the dance have to fit together as a flow.

The flow was perfect between devilish Captain Hook and the lovely sprite with sharp wits, Tinkerbell.  Once more, Jimmie Allen, performed flawless lifts, in between the dueling exchanges.  By the end, though, Captain Hook plops to the floor while Tinkerbell takes satisfaction.

Nothing prepares Jimmie Allen for these numbers

Unfortunately, what the fairy godmother grants on Disney Heroes night– the gift of not sending any dancing couple out of the competition—Disney Villains night vexes with double elimination.  Thus, the scores and fan support take on more impetus than ever.

For Jimmie Allen and Emma Slater, however, a glowing reception reigned with rave reviews, as Taste of Country notes. Usually, the veteran judge, Len Goodman, tends to nitpick about footwork, frames, and all manner of dance technicalities.  This critique, though, praised Jimmie Allen for lifts “completely in character” with the dance and the way the story came through the performance.  Derek Hough gushed that Jimmie was “transforming as a performer,” which is one of the intentions in DWTS.  With his typical dramatics, Bruno Tonioli candidly blurts that the performance was “a bada@@ jazz!” In closing the comments, Carrie Ann dubs the dance “amazing,” and predicts “It’s gonna be a good night.”

Surely, Carrie Ann saw right into her crystal ball. The judge starts the high numbers for Jimmie Allen with the first 9 ever.  Len Goodman follows with an 8.  Derek Hough offers another 9, as does Bruno, making for 35/40 on the night and 67/80 combined with the first night.  Those numbers marvel a Vegas streak in DWTS terms.  No 10 appears yet for Jimmie Allen, but the country music phenom only gets better and better, and the only way is up, reaching for that mirror ball!

Jimmie has his mind on another number

While chatting with Tyra Banks to allow the judges time to tabulate scores, Jimmie Allen reveals news on another number.  The daddy-to-be (again) divulges excitedly that “She’s 2 centimeters pregnant.”  The announcement earns an instant, understanding chuckle from Tyra and Emma.  Naturally, the ladies overlook the little slip, but the clock is ticking for the proud parents.  It’s a good thing Jimmie was first in line to perform.  Who knows where dance practice will be next week.  Presumably, another pair of sweet little lungs and a precious heart will be cheering him on!  Before leaving the stage, Jimmie credits the costumers and makeup artists for “making us look this good.”  No shows go on without the talents of these gifted artists behind the scenes.

With the tally totaled, Jimmie Allen and Emma gain salvation to strut and swing to Grease next week.  This daddy hopes he doesn’t see the lower half of the leaderboard again in this competition.  Instead, he’s making more memories for his expanding family to be proud of and look back on for years to come.