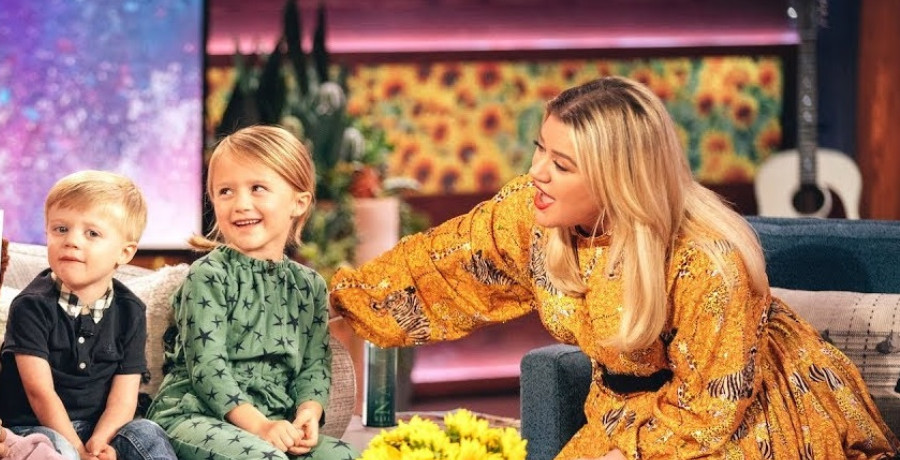 These days, Kelly Clarkson is focused on Christmas. Fans hailed her the new Queen of Christmas the moment she dropped her second holiday album titled When Christmas Comes Around. She celebrated the festive occasion early when she dropped the album last week. Some of her fans are already in the holiday spirit thanks to her duets with Chris Stapleton and Ariana Grande.

But her kids have Halloween on their minds. They helped their famous mom transform their home for the season. Remington and River made a rare appearance in Kelly’s newest video. The littles one stole the show as she showed off her home in Los Angeles where she moved following her divorce from Brandon Blackstock.

The Voice coach moved into the five-bedroom property with her two kids. They took over the responsibility of Halloween decorating. On Wednesday, October 27, Kelly Clarkson shared a clip of their home on Instagram. She gave a rare glimpse at her life with her kids to show off their impressive decorating skills.

She also took a brief break talking about Christmas. As fans know, Kelly has had the holidays on her mind. This video is a nice break from the constant Christmas music, especially if it’s not your favorite holiday. River and Remington helped their mom put up a Halloween display in their living room.

In the two-minute, fans see a haunted village that’s all lit up. It includes a fairground ride, spooky trees, and pumpkin patches. They put the display in front of their window, which shows their beautiful garden in the background. Kelly is happy with how their spooky Halloween wonderland turned out.

“I helped a bit but mostly this is the work of my 5 and 7-year-old!” Kelly Clarkson wrote in the Instagram post. “It’s almost Halloween and our household is ready y’all!”

Shows pride for her kids

Kelly Clarkson is a proud mama. She often gives fans a glimpse at her family home as part of her ongoing partnership with Wayfair. But this was a rare look at their family life. Fans took to the comments section to share how impressed they are with the Halloween display.

One fan joked about a “Halloween album coming when??” The American Idol alum shares her two children with her ex-husband Brandon Blackstock. The two are in the midst of a legal battle. In June 2020, Kelly filed for divorce, citing irreconcilable differences.

She wrote 60 songs following their split. As a result, she came up with another Christmas album rather than a traditional breakup album. She dropped the lead single, “Christmas Isn’t Canceled (Just You)” in September. It’s also safe to say that Halloween isn’t canceled either.

Carrie Underwood Hearkens Back To Signature Style On New Tune
Maren Morris’ Tour Bus Is Far From Humble
Jimmie Allen Puts The APB Out On ‘On My Way’ With Jennifer Lopez
Keith Urban Relies On Marital Devotion For Sobriety?
Blake Shelton Headlines 2 Major Events, See What