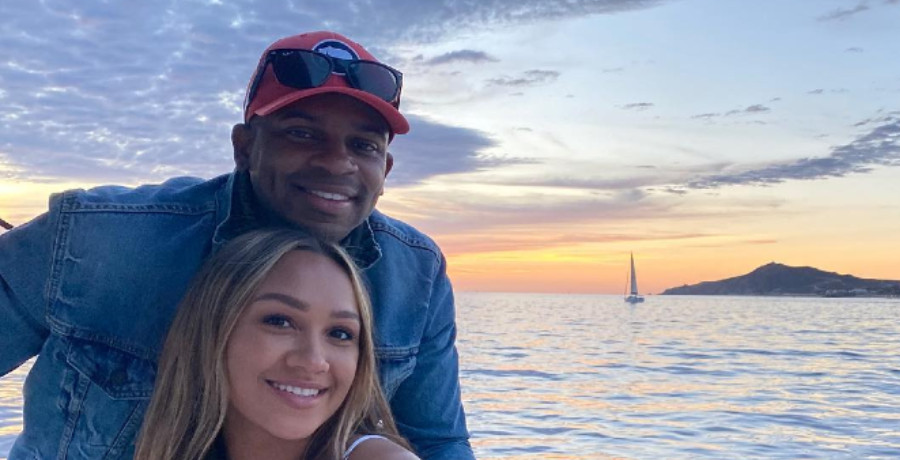 His multitudes of fans joyfully verify how Jimmie Allen provokes beaming smiles just by showing up in any environment. No matter if he headlines a show on his latest Down Home Tour, savors a blissful break with his young family, or drops in on a country music podcast with a pal, the multitalented and mega-energetic star makes any place a party. While it’s clear that Jimmie Allen has fun in his endless projects, the Grammy nominee for Best New Artist reflects on his much deeper purpose during the visit with Evan Paul on Taste of Country Nights, as Taste of Country confirms.

Obviously, the terms “artist” and “entrepreneur” only scratch the surface for Jimmie Allen. The “Best Shot” singer-songwriter is a nonstop generator of creative ideas, including a new “Best Shot” version to re-energize fans through the current dates on the road.  Despite his dedication and driving creativity, though, Jimmie Allen admits he never gets everything right.

“I forget lyrics all the time,” Jimmie Allen confesses.  “I just mumble when I don’t remember,” the infectious entertainer admits, ”or I act like I’m catching the spirit,” he declares. He provides a demonstration that fans surely delight in visualizing.  He also teases that turning to his band is no help for his dilemma.  “We don’t know the lyrics, either” comes the look from the musicians who only recently learned the new setlist.

“I want a Teleprompter– I need one,” Jimmie Allen reiterates. “Once I get into the verse, I’m good,” the singer assures. Without a doubt, his fans don’t mind one bit if Jimmie Allen needs their help getting started. They can sing all night. Rather than a laptop or an assistant in an earpiece, Allen says a Teleprompter is his next purchase for his professional career.

“I’ve written 500 songs,” (in the last three years) the industrious artist reminds.  It’s never a matter of committing 18 to 20 songs to memory. Jimmie Allen has a repertoire of songs written for other artists, created for productions, and other ventures beyond his own catalog. “Those songs are always in my head, all the time.  They don’t go away.” Understandably, the Delaware native deserves a little leeway when his mental Rolodex rolls off course a bit.

So many projects, just one man

Off the top of his head, Jimmie Allen reveals he has “a sitcom I’m pitching,” another show where the “Make Me Want To” hitmaker serves as a mentor, a game show featuring the crooner as host, a further show in which Jimmie Allen is “involved in a big way,” not to mention an appearance slated on WWE.

On top of the TV offerings, Jimmie Allen runs two Delaware businesses, has a follow-up book to My Voice Is a Trumpet, just founded his own publishing company, maintains his clothing line, all while working on his new album and launching a tour.

Remarkably, a bandmate of Jimmie Allen provided the assurance that his employer’s success, particularly following his Grammy nomination, “kills the narrative that country music is racist,” as the artist relates.  “It wasn’t hip-hop, it wasn’t R&B that gave me my success– it was country music and people in country music who stood behind me.”

The grateful statement doesn’t mean that Jimmie Allen fails to realize the prejudice, injustice, and inequality that permeate the industry. He frequently takes a stand in support of friends like Mickey Guyton and others in that cause.

Ode to a father

As a loving tribute, Jimmie Allen honors his family in the names of his own children.  Zara James arrived just ahead of the close of Allen’s Dancing with the Stars run when he narrowly missed the semifinals but consistently scored big with his emotion and spirit. Naomi takes her name from Jimmie’s grandmother, as did the Bettie James Project, honoring his second grandmother.  Big brother, Aadyn, 7, rounds out the brood at home. Mom, and still newlywed bride, Alexis Gale, does her share of on-the-job learning about ages and stages.

Beyond the namesake, Jimmie Allen nods to his dad with his upcoming single “Down Home,” just as “Freedom Was A Highway” nears the top spot in country radio.  The video for this song is already complete and reflects memories and places from both his own growing years and his father’s, in Lewis and Milton, Delaware.

Sadly, James Earl Allen passed away in 2019. At the time, Jimmie Allen was on tour with Rascal Flatts. Jimmie continues to be one of the most candid artists concerning mental health issues.  He admits that the loss and the timing, “messed me up.” Friends in his closest circle encouraged the songwriter to pour his feelings into the verses of a song. “I finally did,” Allen relates, and he certainly invests much of himself personally and musically in the effort. The humble son credits his father for his own love of country music.  The star also notes that his many business and production endeavors enabled 70 people to become employed during the pandemic. That’s enough to make any parent proud.

Family ties, tours, music, a bright future in television and production, and even a turn as a wrestler are part of Jimmie Allen’s future.  Whatever awaits the one-man entertainment machine, it’s guaranteed to be a good time.

Kelly Clarkson Listens To Fans & Delivers — Here’s How
Maren Morris’ Tour Bus Is Far From Humble
Miranda Lambert Voted One Of Most Influential People 2022
Jimmie Allen Puts The APB Out On ‘On My Way’ With Jennifer Lopez
Blake Shelton Headlines 2 Major Events, See What