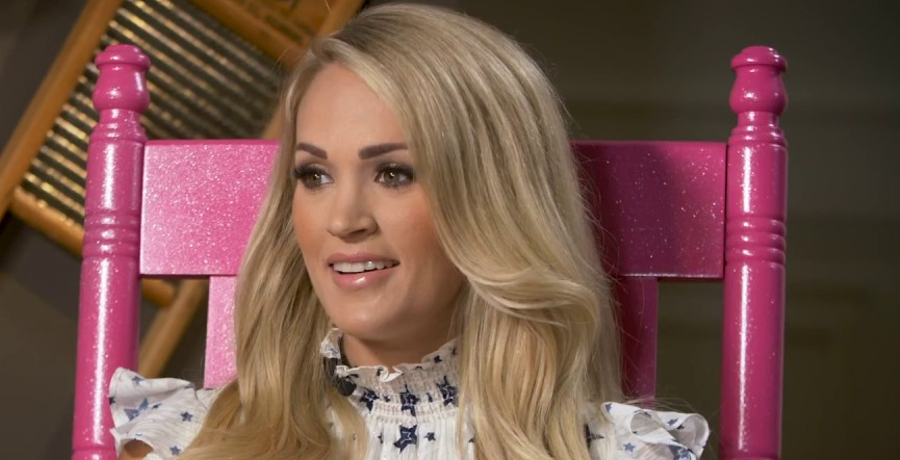 Carrie Underwood celebrated her 39th birthday. The country singer said she “felt loved” by all the warm wishes she received on social media. Fans knew that Thursday, March 10, 2022, was her birthday. So, they wanted to wish their favorite singer a happy one.

Carrie also received messages from her friends and family. She teased that 39 will be her “best year yet.” Meanwhile, fans are looking forward to some new music from the songstress. Does this mean that she has something big planned for this year?

Take a look at this birthday cake

Carrie Underwood shared a picture of her birthday cake. It was a surprise from her husband Mike Fisher and their two sons, Isaiah Michael, 7, and Jacob Bryan, 3. The pink cake featured enormous balls in matching calls. It also read: “Happy Birthday, Mommy” in gold writing.

“Feeling loved this evening! Thanks for all the birthday wishes, everyone!” Carrie Underwood wrote before teasing, “I do believe that 39 is going to be my best year yet! 😉❤️”

Fans took to the comment section to wish her a happy birthday. The post received over 156,000 likes within 21 hours. Some of the fans couldn’t help but wonder if Carrie Underwood was teasing new music this year. It sounds like she has something up her sleeve.

Fans have been waiting to the follow-up of her 2021 release, My Savior. She released her first-ever gospel album in time for Easter. While it was a major success on the Christian music charts, they’re hoping that she will go back to her country music roots.

Feeling loved this evening! Thanks for all the birthday wishes, everyone! I do believe that 39 is going to be my best year yet! 😉❤️ pic.twitter.com/bDCLwebNAq

That’s not the only thing Carrie Underwood has teased. She hinted that she’s going to have a great year. But that’s because she’s back in the recording studio. Prior to her birthday post, the mother of two took to Instagram to share a photo of herself recording new music.

Carrie Underwood looks like she’s in her element. She wore a black hooded sweatshirt as she crooned some notes into the microphone. However, you can’t listen to the post since it’s not a clip. It’s just a photo of her singing inside her booth.

“So, I did a thing…” Carrie Underwood coyly captioned the post.

So, I did a thing… pic.twitter.com/2SnECo5IkA

Of course, fans are freaking out and want more information. “OMG!!!!!! How soon is ‘soon’?????” one user wrote. “OMG WE NEED INFO NOW,” a second added. “when’s the album coming 🤨” a third asked. Some have to wonder if she’s recording music for a new album or for an upcoming performance.

What are your thoughts? Do you think Carrie Underwood will finally release a new country album this year? Sound off below in the comment section. Check back with Country Music Alley for the latest news on Carrie Underwood.

Miranda Lambert Voted One Of Most Influential People 2022
Blake Shelton Headlines 2 Major Events, See What
Jimmie Allen Puts The APB Out On ‘On My Way’ With Jennifer Lopez
Kelly Clarkson Listens To Fans & Delivers — Here’s How
Maren Morris’ Tour Bus Is Far From Humble