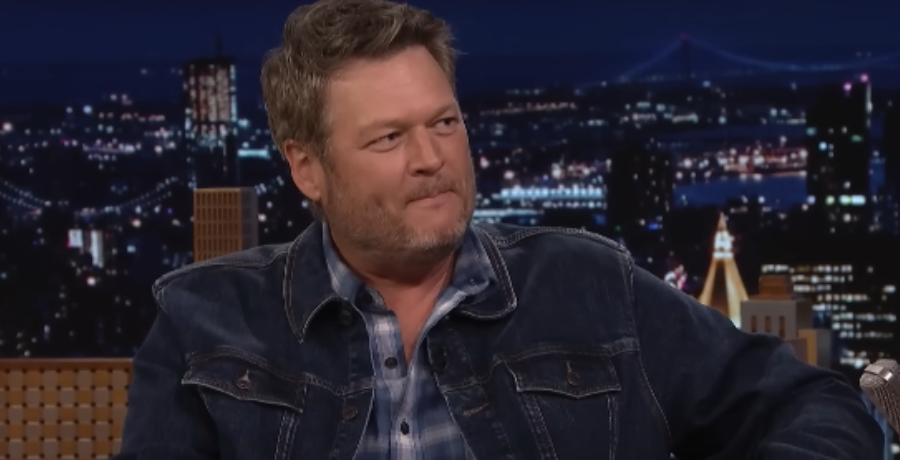 Blake Shelton fans are saying that the country king needs his own show. He made a guest appearance on The Tonight Show with Jimmy Fallon. During the interview, he talked about Season 22 of The Voice. On the Thursday, September 8th broadcast, he also performed a country song about ice.

Blake and Jimmy got together to perform the tune “I’ll Bring the Ice.” Both of them wore cowboy hats for their hilarious set. The song was about the importance of bringing ice to a party. Later on in that episode, Blake reunited with his wife Gwen Stefani to play a game of Pictionary.

Blake Shelton’s wife Gwen Stefani made a sparkly appearance. The songstress teamed up with model Gigi Hadid to play the classic game. She wore a pink Jonathan Simkai set that featured square sequins on the crop top and maxi skirt, per Footwear News. Gwen paired the set with a black fishnet undergarment that showed through the two-piece set.

The No Doubt singer wore her platinum blonde hair down and parted in the middle. Aside from the sparkly set, she wore Swarovski earrings that featured pastel elements in different shapes. She paired the look with an oversized ring and pink beaded bracelets.

Gwen finished off her look with metallic pink leather pumps by Andrea Wazen. The shoes featured thin straps that were adorned with embellished pink crystals. Gwen glittered on the set when she joined Gigi Hadid and Blake Shelton, who partnered up with Jimmy Fallon.

Blake Shelton and Jimmy Fallon faced off against Gigi and Gwen for a fun game of Impossible Pictionary. It had a challenging twist. The men were up to their old hijinks as they struggled to get through the game. However, it seemed like a challenge for Gwen and Gigi as well, but they played well together.

Fans took to the comment section of the YouTube video. Most of them think that Blake Shelton should have his own television show. Others would like to see him in a comedy show with Jimmy. Here are some of the comments:

What are your thoughts on Blake Shelton and Jimmy together? Do you think he should have his own show? Do you agree he has a good sense of humor? Sound off below in the comment section.