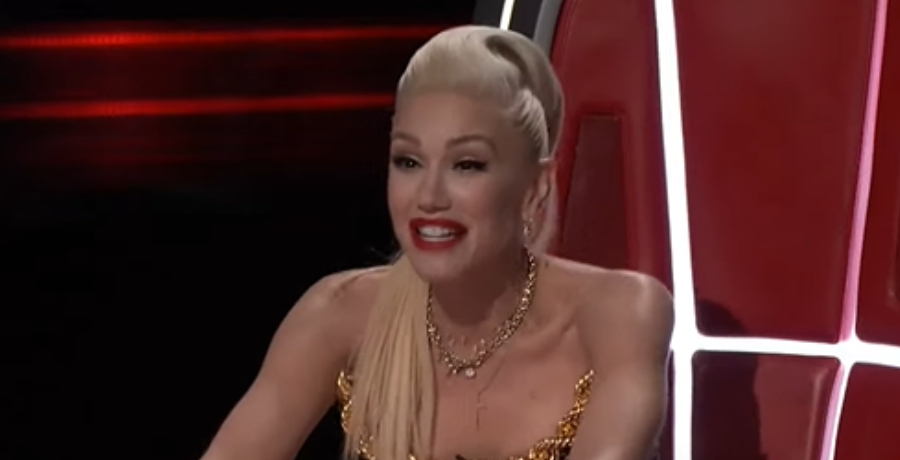 Gwen Stefani twirled in fishnets and fringe. She made an appearance on Thursday’s broadcast of Late Night with Seth Meyers. The songstress took to social media to show off her latest look. It makes sense since Gwen became a fashion icon over the years.

The No Doubt singer is making her grand return to The Voice after a few years. She took a break from the NBC singing to work on her own music. Now, Gwen is returning as Mrs. Blake Shelton. This is the first time that fans will get to see the two interact as husband and wife.

Talks about her return to The Voice

Gwen Stefani appeared on Late Night with Seth Meyers to talk about her return to The Voice and her new makeup line, GXVE Beauty. Host Seth Meyers asked her if she enjoys hearing her songs performed at the auditions. She admitted that she “gets really excited” when it happens. One of her fellow coaches cringed when it happened to them.

“John Legend is known not to press his button if someone does one of his songs,” Gwen Stefani said. “And we’re just kind of like, ‘John! You have to press your button, they’re doing your song!’ I guess he gets very scientific about it and he just gets overwhelmed, but people have done mine. I can’t say when ’cause that hasn’t [aired] yet.”

However, Gwen recalls a time when someone covered “Cool,” but she wasn’t on the show. Blake was impressed with the rendition. The songstress said it was “a totally weird version of it.” Gwen added: “It’s very flattering, and it’s incredible.”

Season 22 will show her return to the show. Gwen Stefani last appeared when she had her first win on Season 19 with 15-year-old pop singer Carter Rubin. In the upcoming season, she will be joined by John and Blake, and newbie Camila Cabello.

How to sell GXVE by Gwen Stefani

She also discussed her GXVE Beauty line and the community she’s built because of it. Gwen Stefani loves that there’s “a really big community” of “makeup fanatics.” The reason why she founded the company is that she did it to interact with the community. She also wanted to give others “a chance to be part of something that I’ve done.” That’s right — her fans can become sales reps and promote her makeup line.

“Like, literally they can sell the makeup and make money off of the collection that they get…” Gwen Stefani explained. “You can do it from home, and you can build up your followers, you can have your own platform, you can share the makeup.”

Check out the rest of her Late Night interview in the video below.

Gwen Stefani does a twirl

Gwen Stefani showed off her look on social media. She took on the ’80s trend by adding elements such as fishnets and fringe. The platinum blonde beauty wore a black cut-out jumpsuit with a fringe skirt that had an attached fringe skirt in blue ombré. She twirled in the photos she shared on Twitter:

had so much fun last night on @LateNightSeth 🫶🏻 all this talk about @NBCTheVoice has me beyond excited 🤩✨ tune in on sept 19 to catch season 22 of #TheVoice 🎤💋 pic.twitter.com/1Z9oljUqKf

The look includes a matching neon blue netted bolero jacket. She finished off her look with black fishnet stockings and embellished black heels. Gwen Stefani wore her blonde hair down and straight with a middle part. She also wore gunmetal drop earrings.

What are your thoughts on Gwen Stefani’s latest look? Do you like her new makeup line? Are you excited to watch The Voice Season 22? Sound off below in the comment section.