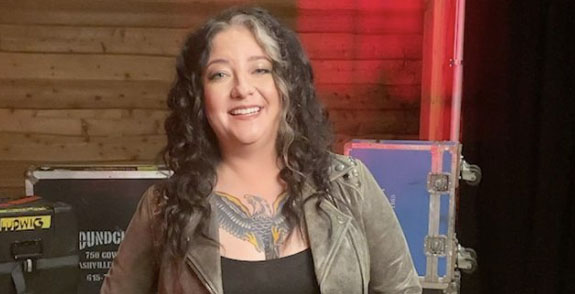 Unflinchingly, country music original, Ashley McBryde, writes with all the grit and glorious abandon that makes life palpable. From the piercing ridicule of her breakout song, Girl Goin’ Nowhere to be unwavering personal and artistic resolve of Never Will, she takes listeners on a purely authentic journey of emotion.

This morning, Ashley McBryde looked bright-eyed and bushy-tailed (as much as any night owl performer can be in the wee hours of the day. She delighted in describing the creative process behind her just-released character study set-to-music, Ashley McBryde Presents: Lindeville to CBS Mornings. NPR heralds the hometown saga as “a glorious detour.” Other major music reviews exude equally glowing praise.

Even so, the rave reviews and rollicking fun set against raw truth in the songs never evoked the tears gently blotted from Ashley McBryde’s eyes before the closing the interview. No, it took a very good friend, bearing a once-in-a-lifetime invitation to cause that kind of response, as Yahoo Sports, the Los Angeles Times, and UPI convey.

As it happens, CBS Mornings celebrates some accolades and shiny hardware of its own with the morning broadcast’s recent Emmy award for Outstanding Morning Show. Nonetheless, it took less than a minute for golden girl co-anchor, Gayle King, to gush over the Ashley McBryde song with the “best title ever,” Brenda Put Your Bra On.

Matter-of-factly, Ashley McBryde relates how the tune and the title refer to “that friend who always sleeps through whatever the happenings are” in a small town.  McBryde and her numerous collaborators created these characters while seated around the kitchen table in a rustic house.  The concept of giving these protagonists “a place to live and some neighbors” seems perfectly natural to the artist well-known for her Martha Divine trilogy. Country Music Alley delved into Ashley McBryde’s transformation from self-pity during the pandemic to one of the most productive creative periods in her life last year.

Ashley  McBryde takes on a new way to make an album

The collaborators took any notion of “should” out of the equation when writing the compilation. Furthermore, Ashley McBryde admits that a “high chance” of alcohol entered the writing sessions but the artist herself feared there was a strong chance that her label would reject the album for wide release. Fortunately, that was not the outcome. Once John Osborne jumped on board as producer, the project was a go.

On the health front, Ashley McBryde feels just fine, too. The musician known for her honesty confesses that the Montana horse-riding accident last year did a lot more damage than merely canceling a few show dates. She thanks “Bart and Wendy, who were there and literally put air into me” to allow her to survive. Not only that, but McBryde made emotional amends with the horse, Jenny, last week. Ashley details that the equine likely “didn’t care.” Still, the time together brought healing and closure of a different kind.

Suddenly, at the midpoint of the conversation, Gayle King interrupts, telling Ashley that “a special friend” has something to tell her.

None other than the slimmed-down Garth Brooks appears virtually, declaring that he has “a proposal for Ashley McBryde.

Playfully, Gayle King interjects that the Unanswered Prayers artist is already married. Brooks counters that his proposal is about joining “a family that keeps growing.”

Naturally, to no one’s surprise, just the announcement of Ashley McBryde’s surprise brings Garth Brooks to tears. By the end of his initial words, McBryde visibly trembles. Calling the Opry “the longest living family in country music,” Garth Brooks assures Ashley that “You belong in it. We need you,” dispelling all notion of unworthiness.

Still stunned by the news, Ashley McBryde confirms her acceptance as “the great feeling and the honor of my life.”

Love from Garth and the lady in blue

On the spot, Ashley McBryde asserts that “There are Grammys and there’s this” in a Country artist’s career. Further elaborating, Garth Brooks maintains that “Grammys and CMA’s– they will fade away.” On the contrary, reminds the country music luminary, becoming a member of the Grand Ole Opry endures “until they put you in the ground.”

As if the morning wasn’t bright enough for Ashley McBryde, the showers of love didn’t stop after a parting “I love you” from Garth Brooks. Stealthily, Ashley McBryde’s team waited behind the doors of the green room on CBS Mornings. The Arkansas star never knew the plan, but her people certainly did.  It turns out that one particular lady in blue, Ashley McBryde’s mom, Martha, a vision in royal blue, kept the secret for two whole weeks.  That was one heck of a feat for a parent, but worth every second of their heartfelt embrace.

Keep up with all your favorite country music artists and their many awards and honors with Country Music Alley.