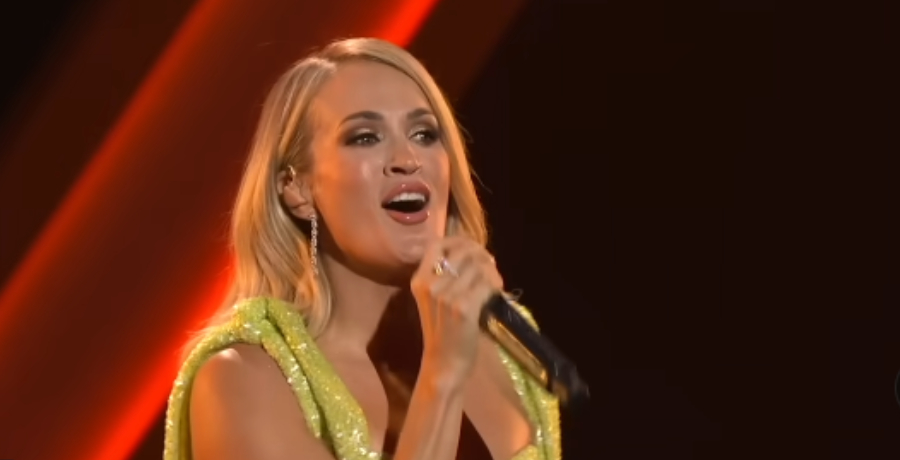 Carrie Underwood fans want to get ripped like the country star. Her latest Instagram post has them motivated to go to the gym. She shared photos of herself from the latest stop of her Denim & Rhinestones tour. Some didn’t expect her to rock out so hard on stage.

On Thursday, November 17, Carrie shared a carousel of photos from her time in Denver. The first photo had fans in a state of shock. She showed off her ripped physique as she did a drum solo. Read on to see the photos for yourself as well as the fan reaction.

The American Idol alum wore a white studded tank top and black cut-off shorts that featured spikes and a thick black belt. Her blonde hair was in her face as she tapped into her inner rockstar and played on a set of drums. The powerful image had fans talking.

The other photos featured Carrie Underwood rocking out on stage to her stadium of fans. She wore tiny shorts, tank tops, and cowboy boots. Most of her costumes featured denim and rhinestones, albeit the name of her new album. Another powerful image showed flames shooting around her on stage.

Wow, Denver!!! I love your city! I love your mountains! I love, love LOVE your loud, beautiful crowds!!! Thanks for bringing some heat in this cold weather! Last night was one to remember!!! 💜💜💜 #Denver #DenimAndRhinestonesTour 📸: @JeffJohnsonFilm https://t.co/2mOssyhnXZ pic.twitter.com/eGYkMXjTTw

Carrie Underwood also wore a bedazzled white number and a denim rhinestone jacket. You could say that she brought the house down in Denver. Carrie talked about the energy that was in the air that night.

“Wow, Denver!!! I love your city! I love your mountains!” Carrie Underwood wrote in the Instagram post. “I love, love LOVE your loud, beautiful crowds!!! Thanks for bringing some heat in this cold weather! Last night was one to remember.”

How the American Idol alum transformed her body

Fans took to the comment section to react. Most fans couldn’t stop looking at the first photo. They wanted to know how to get muscles like Carrie Underwood. Most of them were still in shock over her rockstar persona and fit body.

Carrie Underwood revealed how she transformed her body since she won American Idol. She’s worked with many personal trainers over the years. Carrie found that morning workouts help set her up for success for the rest of the day. Some of her favorite workouts include boxing, jumping rope, and kettlebells, which she can take with her on tour.

She loves working out so much that she does it seven times a week. Carrie is a vegan while her husband Mike Fisher loves to eat meat. When it comes to her sculpted arms, she credits Tabata. She told Women’s Health in 2013 that it makes her “abs hurt” but it works.

What are your thoughts on Carrie Underwood fans wanting to get ripped? Do you find that photo inspiring? How do you plan to get fit in 2023? Sound off below in the comment section.